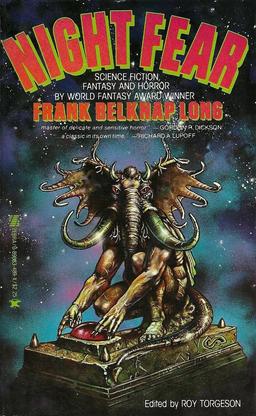 But his short fiction has fared a little better. Long was part of the Lovecraft Circle, and indeed was a close friend of Lovecraft’s for many years (James McGlothlin has a great pic of the two, accompanying his article on The Lovecraft Circle at the First World Fantasy Convention.) His contributions to the Cthulhu Mythos, including “The Hounds of Tindalos” and “The Space Eaters,” are still highly regarded today.

Long’s short fiction was gathered in four paperback collections: Odd Science Fiction (1964), The Rim of the Unknown (1972), The Hounds of Tindalos (1978) and Night Fear (1979). They are long out of print, but most of his finest short fiction was collected in Masters of the Weird Tale: Frank Belknap Long (2010), a gorgeous limited edition hardcover from Centipede Press.

And here’s the back cover, with a pair of great reviews from Gordon R. Dickson and Richard Lupoff (click for bigger version): 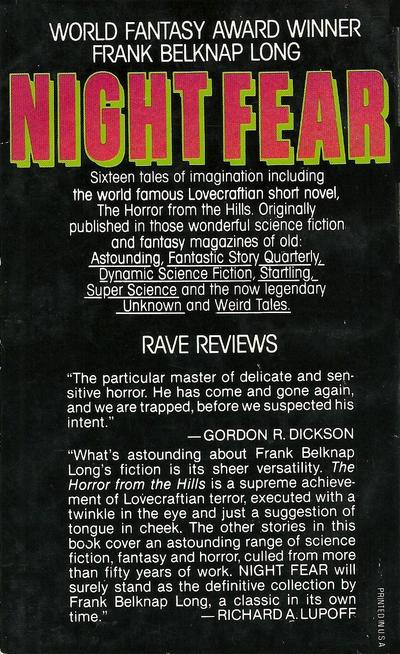 I appreciate how the publisher called out “those wonderful science fiction and fantasy magazines of old” so prominently on the back cover. I’m not sure if that was somehow considered a selling point in 1979, or just seemed like a good idea. Still, glad to see it.

Douglass Draa discussed Long in more detail in an article in 2012.

The Zebra paperback edition of Night Fear remains fairly easy to find; copies in great condition sell for $6 – $8 on eBay. I bought the copy pictured above as part of a collection of horror anthologies that also included Sam Moskowitz’s terrific Horrors Unknown, which I covered here two weeks ago. The lot cost $25, or about $2.30 per book (plus shipping). I’m telling you, buying lots is the way to go. 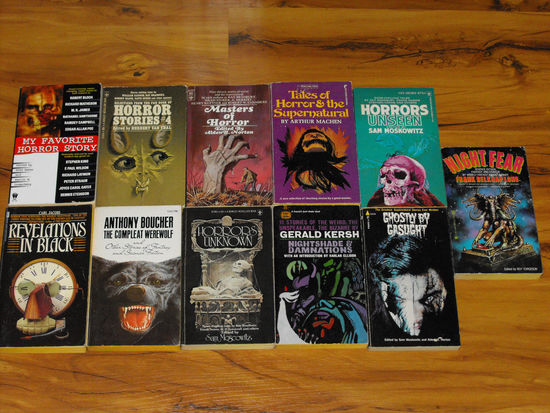 Night Fear was edited by Roy Torgeson and published by Zebra Books in June, 1979. It is 320 pages, priced at $2.25. The colorful cover is by Clyde Caldwell.

My copy has ads in the back for David C. Smith’s Oron, Garrett Ford’s anthology Science and Sorcery, and the first three volumes of Andrew Offutt’s Swords Against Darkness. Sure seems like Zebra was doing a lot of favors for fantasy fans in the late 70s.

Hmm… It might be well, for anyone intrigued by this entry but who hasn’t read Long before, to try something by him from a library or free online. In my experience, he is not a good writer. Many years ago I panned his memoir of Lovecraft and mentioned that it was a Mythos story by Long (“The Horror from the Hills,” I think) that, along with Copper’s The Great White Space, was one of two Mythos stories that, up to that time (mid-1970s), I had found simply unfinishable. Over at the Science Fiction and Fantasy Chronicles Forums site, I’ve been reading around in Groff Conklin’s anthologies for a couple of years, rating stories from 1 (lowest) to 5, and giving Long’s “Flame Midget” a 2.

So — caveat lector and caveat emptor, when it comes to Long — for what my opinion is worth…

I’ve read a few of his stories that were decent. The only novel I’ve read is Space Station 1. I think the word that best describes it is slapdash.

Other than the two big ones you’ve mentioned John, I’m not very familiar with Long’s work.

To my mind, Frank Belknap Long’s greatest claim to fame, at least in Lovecraft circles, is being the main character in T. E. D. Klein’s absolute Lovecraftian masterpiece, “Black Man with a Horn.” My understanding is that Klein (once the long time editor of Twilight Zone Magazine) knew Long personally and some of the tidbits in that story are truly biographical.

I read Night Fear and The Hounds of Tindalos about 10 years ago. While Long certainly improved with time, as Major Wotton says, he wasn’t that good. Slapdash is probably a good word, because I got the impression that many of the stories were hastily written first drafts. The story was usually fine, but the execution could have been better.

You got a good deal on that lot, John. I’ve got about half of those books. There are some good stories in them.

> It might be well, for anyone intrigued by this entry but who hasn’t read Long before, to try something by him from a library or free online.
> In my experience, he is not a good writer.

You could well be right. I haven’t read any of his stories in over 35 years (none that I remember, anyway). Still, I think he’s unquestionably one of the more important contributors to the Cthulhu Mythos — just for “The Hounds of Tindalos” alone, if nothing else.

> I think the word that best describes it is slapdash.

I’m not sure I can argue with that. 😉

> To my mind, Frank Belknap Long’s greatest claim to fame, at least in Lovecraft circles,
> is being the main character in T. E. D. Klein’s absolute Lovecraftian masterpiece, “Black Man with a Horn.” My understanding
> is that Klein (once the long time editor of Twilight Zone Magazine) knew Long personally and some of the tidbits in
> that story are truly biographical.

Seriously? I had no idea.

I’ll have to dig out my copy of DARK GODS and read “Black Man With a Horn” again. I remember what a fuss there was about that story when it first appeared. S. T. Joshi praised it highly just a few years ago, as I recall.

> You got a good deal on that lot, John. I’ve got about half of those books. There are some good stories in them.

Thanks, Keith. Believe it or not, I was willing to pay $25 just to get Carl Jacobi’s REVELATIONS IN BLACK, and a fine copy of NIGHT FEAR. I’ve been looking for the former book for a long time. The only paperback copies I found were $15 and up, so when it showed up in this lot on eBay, I jumped on it.

John, wow. I didn’t realize REVELATIONS IN BLACK was that expensive. I’m glad I picked up a spare copy a couple of years ago. Now if I can only remember where I put it…

Oh my John, “Black Man with a Horn” is probably my favorite not-written-by-Lovecraft, Lovecraftian story ever! There is one line in that story that is one of the most chilling one lines I’ve ever read. Black Gods is considered one of the seminal Lovecraftian anthologies. It’s a must-have!

Note though that Klein never mentions the main character in “Black Man with a Horn” by name but there are various hints that indicate to those “in the know” that it’s Long.

Not that I’m in the know. I’m just going by what Joshi and all the other Lovecraft aficianodos say. As far as I can tell, not knowing that Long is the main character makes no difference to enjoying the story.

If anyone IS interested in looking for other Long titles, Armchair Fiction has been publishing oversized paperbacks that strongly resemble the old Ace Series S, D, and F doubles; instead of flipping the book over to read a second book, Armchair publishes them as a single book, but front and back covers are each devoted to one of the two books. They’ve not only reprinted some of those original Ace pbs, but the covers are in many cases also reprints (although I’m not sure if the original covers are matched up with the original novels). Their first double was Long’s “Space Station #1,” paired with William P. McGivern’s “The Galaxy Raiders.” Very attractive books, but T. Parker’s and J. ONeill’s comments may be all too appropriate.

I’ve always enjoyed the FBL collections and stories that I’ve read over the years.
I’ve never found his stories to be “slap-dash” or rushed. These guys were working writers who fed and clothed themselves not with quality, but with quantity. They had to crank these things out. They didn’t have the luxury of taking months to craft a single story. And like every writer, some of his tales were outstanding and some were just mediocre. I’ve found all them entertaining though.
And that’s what these stories are, entertainment and not art. No one has mentioned this story, but I feel that it proves that when he was hot, he was hot…….

You have a good point, Doug. They were writing fast to make a living. I do think Long improved with time. Some of the stories in NIGHT FEAR were his early work. I’ve got a collection of his science fiction from the 40s, and it’s much more polished.

[…] vintage paperbacks on eBay, selling for $25, or about $2.30 per book. I previously covered Night Fear by Frank Belknap Long, the Sam Moskowitz anthology Horrors Unknown, and Carl Jacobi’s […]

I finally tracked down a copy of Night Fear on eBay and read it. To say the least, not incredibly impressed. At best, I would say Long was a mediocre sci-fi/horror writer, assuming this book represents some of his best work.

Nevertheless, some of his ideas were fairly creepy even if executed in a clunky manner. His “Horror From the Hills” was by far the best story in this volume. I had read about the entity Chaugner Faugn in the Call of Cthulhu RPG but had never known where the inspiration came from. Now I know.

For this story alone I’m glad I got this volume, and because of the great cover art of Changer Faugn.

Thanks for the mini-review, James. It’s been a while since I’ve dipped into NIGHT FEAR, so I don’t challenge your take on the book. In any case, I don’t think Long has transitioned well to the 21st Century.

I wonder if his science fiction has done any better. I have a Vintage Treasures article on RIM OF THE UNKNOWN coming up; if I’m lucky I’ll have time to review some of the stories in that first.

And I wasn’t aware that Chaugner Faugn was statted out for Call of Cthulhu… that’s a cool connection. CoC introduced me to Lovecraft, and I still have a tremendous fondness for that game!