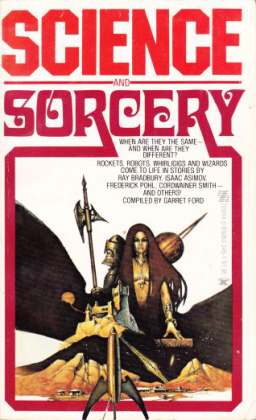 A few days ago I mentioned Martin H. Greenberg’s impressive collection of paperback SF and Fantasy, and the three boxes of that collection I carted back from the Windy City Pulp and Paperback Show. Two are now incorporated in my library. I set aside roughly a dozen of the more interesting titles to talk about here, and the first one is Science and Sorcery, an anthology of pulp SF stories from 1978.

It was published by Zebra, a pretty low-budget outfit. So low-budget, in fact, that it doesn’t even have a table of contents.

Who publishes an anthology without a table of contents? That’s pretty edgy. A publisher desperate to save paper, apparently. The whole thing feels slapped together, from the introduction on the back of the title page to the oddly formatted first story, Cordwainer Smith’s “Scanners Live in Vain” (page 3).

Fortunately, science fiction fans are a diligent and industrious lot, and I found a complete TOC online (at the book’s Wikipedia page, believe it or not). Here it is:

A pretty eclectic mix, to be honest. Can’t remember the last time I saw an anthology with fiction by Sam Moskowitz. Or James MacCreigh, Ed Earl Repp, Leo Paige, Robert E. Gilbert, George R. Cowie, John Martin Leahy, R. H. Deutsch, or J. T. Oliver, for that matter. I don’t want to say this anthology primarily consists of nobodies, but it looks like this anthology primarily consists of nobodies. 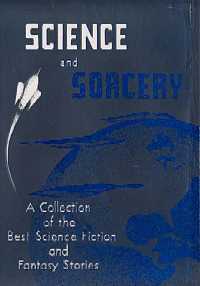 Well, let’s be charitable and say that it consists of underappreciated and underrepresented writers. According to the copyright page, most of the stories originally appeared in Fantasy Book, a semi-pro magazine that published eight issues between 1947 and 1951. The rest come from Thrilling Wonder Stories, The Vortex and Weird Tales.

Science and Sorcery was originally published in hardcover in 1953. The editor was Garret Ford, a pseudonym for William L. Crawford, publisher of Marvel Tales. The original edition came from his publishing company, Fantasy Publishing Company, and was limited to 500 copies.

The Crawford Award, given out every year since 1985 at the International Association for the Fantastic in the Arts (IAFA) to the best first fantasy novel, is named in his honor.

Although the paperback reprint didn’t seem to get much love, I note the 1953 edition didn’t fare that much better. The distinguished reviewer P. Schuyler Miller, writing in the December 1954 issue of Astounding Science Fiction, said it was “pretty poor stuff by present-day standards.”

Ah, well. All of that is irrelevant to the joy I experienced on finding a copy among Martin H. Greenberg’s collection. Science and Sorcery was one of the first paperback SF anthologies I ever purchased back in the late 70s, and I treasured my early copy.

Holding it again was a special thrill. This is only the second copy I’ve ever seen, and I’m glad to have it.

I knew I e-loitered on this site for a reason!

I know this book. I read it when I was a kid it was my intro to Bradbury, Asimov, ( Cordwainer ) Smith + others whom are yes, as you put it Mr. ONeill; No-Names.

I asked the uncle I borrowed it from about the writers. Uncle said most of them didn’t give us much work, though he actually met then late Moskowitz in the 1960’s. Moskowitz was at one time considered like the S.T. Joshi of Science Fiction, some-kind-of-ascended-uber-fan-historian of SF, though not WF.

Science + Sorcery is a pretty low-budget affair, though the stories are both passing-fair + hard to come by.

Also an antho that is 70% vanished writers is almost a work of SF or something else in itself.

James MacCreigh was one of Lester del Rey’s pseudonyms.

I take that back (this is what Happens when I try to work from memory). James MacCreigh was one of Fred Pohl’s pseudonyms. I knew it was one of those guys. 🙂

Looks like the anthology was created chiefly created to celebrate FANTASY BOOK. And that magazine’s biggest claim to fame, as I recall, was that it published “Scanners Live in Vain”, launching Cordwainer Smith’s career, when every other editor rejected it.

The intro by Fred to cordwainer Smith’s collection (Baen) WHEN THE PEOPLE FELL (2007) opens with this:

“Once, a good many years ago, I had a story in a magazine called FANTASY BOOK. Actually, it was only about half a story (it was a collaboration with Isaac Asimov called “Little Man on the Subway”)…”

It’s a terrific collection, and I’ve got only 100 pages of the 600 to go. Cordwainer Smith is so much more than his well-known “Scanner” story. This guy is blowing me away.

Zebra perpetrated many great crimes upon the publishing world (not the least of which being when they actually misnumbered the books in Mundy’s Tros of Samothrace series). But if you could get past the technical glitches, they did put or keep a lot of great stuff into print.

Nice bit of detective work! Thanks. 🙂

And you’re absolutely right — WHEN THE PEOPLE FELL is a terrific book. Amazon tells me there’s a mass market paperback version due in August (finally).

I also like the companion book, WE THE UNDERPEOPLE.

> if you could get past the technical glitches, they did put or keep a lot of great stuff into print.

Well said. They were a discount publisher, and no mistake, but they took a lot of risks on genre fiction that other publishers weren’t willing to.