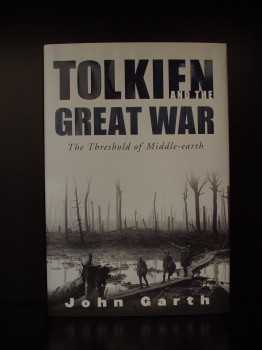 As a subscriber to the Mythsoc listserv, I was very grateful to find a link from Michael Martinez — proprietor of the fine Middle-earth.xenite.org website — to a recent interview conducted with J.R.R. Tolkien scholar, John Garth, author of Tolkien and the Great War: The Threshold of Middle-earth (Houghton Mifflin Company, 2003). It’s a fascinating read and worth checking out; you can find it here.

Some reviewers have dubbed Tolkien and the Great War the best book on Tolkien that has yet been written. I wouldn’t go that far (for the record that book is Tom Shippey’s The Road to Middle-earth) but it is arguably the best book on Tolkien in the last decade. While Humphrey Carpenter’s biography is still the seminal work on the life and times of Tolkien, it brushes only lightly over his military service. Tolkien’s experiences with the Lancaster Fusiliers are stamped all over The Lord of the Rings, as Garth ably demonstrates in Tolkien and the Great War, and so any complete understanding of the influences of Tolkien’s works must account for his World War I experiences.

Central to The Lord of the Rings is the departure of the elves for the Grey Havens and the sense that magic is leaving along with them, to be replaced by the prosaic age of men. In Tolkien and the Great War, Garth says that this tenet parallels Tolkien’s own experiences in 1915 when the Oxford campus was emptied of its undergraduates due to the call of war. Melancholy pervades The Lord of the Rings, the sense that something has been lost: a simpler, more idyllic time. Tolkien exhibited nostaglia for his lost childhood (his parents were both dead by the time he was 12), and later, for his glorious days spent with a trio of bright Oxford undergraduates that dubbed themselves the Tea Club and Barrovian Society (TCBS), a group consisting of Tolkien, Rob Gilson, G.B. Smith, and Christopher Wiseman.

According to Garth the TCBS was more than a tight-knit group of friends with common interests of literature and spirited discussion. They also shared an earnest belief that they could change the world for the better. After entering the service they continued to write to each other, believing that their wartime experiences would make them stronger and propel them to something greater. Wrote Wiseman, “Fortunately we are not entirely masters of our fate, so that what we do now will make us the better for uniting in the great work that is to come, whatever it may be.”

But the reality of war greatly dimmed that optimism, leaving the TCBS wondering whether they would ever have that chance. Smith foresaw his end in the fields of France, as described in a poignant letter to Tolkien:

My God bless you, my dear John Ronald, and may you say the things I have tried to say long after I am not there to say them, if such be my lot.

It is heartbreaking to think what came next: Gilson died in one of the many suicidal advances across the mud-choked Somme battlefield, straight into German machine-gun fire; Smith suffered shrapnel wounds from an exploding artillery shell and later died of gangrene infection. That left only Wiseman and Tolkien to carry on the TCBS’ promised great work. Tolkien developed trench fever and had to be evacuated back to England, which in all likelihood saved his life (his unit was later decimated in combat), but he and Wiseman held up their end of the bargain: Wiseman would go on to become a school headmaster, while Tolkien of course would go on to become an Oxford professor and write the greatest fantasy the world has ever known. Writes Garth: “The Lord of the Rings … stands as the fruition of the TCBSian dream, a light drawn from ancient sources to illuminate a darkening world.” 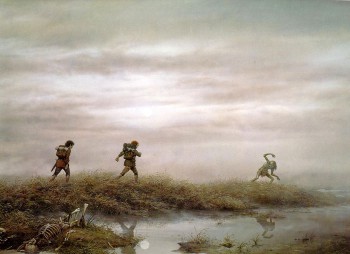 Tolkien wrote in a letter that he drew his inspiration for the landscape of the Dead Marshes from his experiences in the Somme but it’s no great stretch to speculate that this terrible battle made an impact in other, more profound ways on The Lord of the Rings. In the first day of the battle the British suffered their worst loss of men in a single day in British history; 57,000 casualties, including 19,000 young men whose lives were snuffed out like candles in a hail of German machine-gun fire and shrapnel. But unlike many of the famous WWI combat veterans whose experience resulted in poems and stories of disillusionment and disenchantment (Wilfred Owen’s “Anthem for Doomed Youth,” Ernest Hemingway’s A Farewell to Arms), Tolkien refused to believe that the sacrifice of brave young men was a waste. Says Garth: “In contrast, Tolkien’s protagonists are heroes not because of their successes, which are often limited, but because of their courage and tenacity in trying. By implication, worth cannot be measured by results alone, but is intrinsic.” This theory of courage is exemplified in the character of Frodo Baggins who, thrust into a larger war beyond his control, nevertheless manages to carry the One Ring to Mount Doom. While a tiny, insignificant event when compared to the great sweep of combat at Minas Tirith and elsewhere, it mirrors the great acts of unrecorded bravery on the battlefields of World War I.

Martinez’ interview serves as a primer on Garth’s book and in places even expands upon it. It’s quite in-depth and highlights a few of the many allusions between World War I and Tolkien’s creation, such as this observation by Garth:

I’m struck by how Tolkien repeatedly embodies fear as a kind of miasma (the Black Breath, fog on the Barrow-downs, the Unlight of Shelob, the grey mist that flows out of the Paths of the Dead), and I suspect this was shaped by the smokes of the battlefield, and particularly by the ever-present fear of poison gas. I’m also struck by how Tolkien repeatedly shows fear reducing people to the level of beasts who crawl on the ground – think of Gimli at the entrance to paths of the Dead, or Merry dazed in the mud beneath the Witch-king’s steed – and I’m reminded of the phrase Tolkien used to sum up the experience of war: “animal horror”.

Reading Martinez’ Q&A made me realize that I had forgotten several fascinating details from Tolkien and the Great War, including Garth’s comparison of the Nirnaeth Arnoediad (aka., The Battle of Unnumbered Tears) to the horrific slaughter of the Battle of the Somme. The similarities are striking: The high hopes beforehand (“Soldiers in the run up to July 1, 1916 had it drummed into them that the artillery had battered the German defenses into dust and killed the German troops or sent them running”); the assault on a wide front comprising various allies; the dangers of mistimings and misunderstandings (in the Somme soldiers were sent into machine-gun fire due to unreliable communications and failure of artillery; in the Nirnaeth Arnoediad an ill-timed assault by the Elves results in ruin); of course the awful, unexpected toll of casualties; and so on.

Martinez’ interview hints that Garth may have another book in him on the influence of World War I on Tolkien and Middle-earth; here’s hoping he writes it. There is still fertile, if war-torn, territory to be explored here.

Martinez by the way has conducted a series of interviews with various Tolkien scholars and authors on his website and it’s well-worth your time seeking them out.