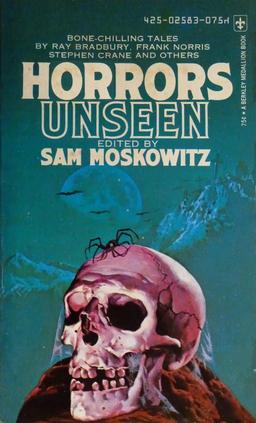 About six months ago I bought a small collection of vintage horror paperbacks on eBay (see the whole set here). It was a delightful batch of books, mostly anthologies and short story collections from the 60s-70s, and I’ve been gradually working my way through it.

Horror anthologies are still published today, of course, and we’ve covered several recent examples right here. But over the years the market has shrunk enough that they are nowadays exclusively published in hardcover, or (at best) trade paperback. The days of the cheap paperback horror anthology, when a wide range of titles crowded the shelves, are long over. I miss them.

Sam Moskowitz was a well-known editor with some 25 anthologies to his name, and Horrors Unseen was the last. It was the third in a loose series which started with Horrors Unknown (1971) and Horrors in Hiding (1973; edited with Alden H. Norton). Sam was a pulp enthusiast, and these books are crammed full of classic horror tales from the pulps — this one includes the first reprint of C. L. Moore’s “Daemon” from Famous Fantastic Mysteries, and other reprints from Imagination!, Colliers, and other places.

Horrors Unseen was edited by Sam Moskowitz and published in June 1974 by Berkley Medallion. It is 208 pages, originally priced at 75 cents. It has never been reprinted, and there is no digital edition, but it’s not a rare book and copies are available online for $2-3. The cover artist is not credited, but it sure looks like Vincent di Fate.

I read the Masters of Horror anthology WAY back in the day.during the time of its publications but was never quite sure of the title though the cover was never forgotten. I do NOT remember how I got it but three of the stories left a lifelong impression. Dracula’s Guest and the Werewolf and a little thing called a Piece of Linoleum that probably started my innate awareness of the power and fear of women in general (and healthy admiration)-lol). Would love to find a copy someday myself. Thank you for showing your books–I also was thinking it waqs Masters of Terror all these years as well. The magic age of reading really IS the preteens.

I miss those days, too, John. Even second hand shops don’t have a wide selection of horror anthologies any more. I’ve always enjoyed horror at short lengths more than I have horror novels. I think that’s due to all the horror anthologies that were available new and used as well as in libraries. The library where we lived when I was in 8th grade had a number of the shadows volumes, and I found a treasure trove of anthologies in used book stores and at garage sales.

Including this title, which I bought solely for the C. L. Moore story, although I read all of them.