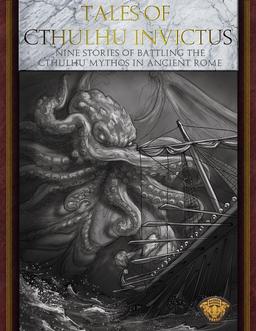 Cthulhu Invictus, the popular 2009 Call of Cthulhu sourcebook from Chaosium, allows players to partake in mythos adventures in the hills and streets of ancient Rome. It was at least partially inspired by one of Lovecraft’s most famous dreams, described in a letter to Donald Wandrei dated Thursday, November 3, 1927. The letter survives (and the relevant fragment, now titled “The Very Old Folk,” is posted online here), and it relates an exceptionally vivid nightmare in which Lovecraft dreamt  he was an ancient Roman named Lucius Caelius Rufus, investigating a terrible Iberian hill tribe.

He had killed himself when the horses screamed… He, who had been born and lived all his life in that region, and knew what men whispered about the hills. All the torches now began to dim, and the cries of frightened legionaries mingled with the unceasing screams of the tethered horses. The air grew perceptibly colder, more suddenly so than is usual at November’s brink, and seemed stirred by terrible undulations which I could not help connecting with the beating of huge wings…

Above the nighted screaming of men and horses that dæmonic drumming rose to louder pitch, whilst an ice-cold wind of shocking sentience and deliberateness swept down from those forbidden heights and coiled about each man separately, till all the cohort was struggling and screaming in the dark… Only old Scribonius Libo seemed resigned. He uttered words amidst the screaming, and they echo still in my ears… “Wickedness of old… it is wickedness of old…”

Tales of Cthulhu Invictus is an original anthology of Cthulhu Mythos fiction set in Ancient Rome, the setting of Cthulhu Invictus. It was funded as a stretch goal as part of a successful Kickstarter for De Horrore Cosmico. It is due to be published any day now by Golden Goblin Press.

Here’s the complete TOC for Tales of Cthulhu Invictus

“Vulcan’s Forge,” by William Meikle
“To the Fertility of the Empress,” by Christine Morgan
“A Plague of Wounds,” by Konstantine Paradias
“Time Devours All,” by Pete Rawlik
“The Unrepeatables,” by Edward M. Erdelac
“Signs of the Black Stars,” by Penelope Love
“Lines in the Sand,” by Tom Lynch
“The Temple of Iald-T’quthoth,” by Lee Clark Zumpe
“The Seven Thunders,” by Robert M. Price

And here’s the latest progress report on the book, posted on July 21st at the Kickstarter page:

I sent Tales of Cthulhu Invictus into layout this morning, and hope to have it into the printers just as soon as possible. Once physical copies arrive at the Goblin Lair, we’ll start sending out those rewards who added the Dead Tress add-on. We had hoped to get them printed at the same time, but unfortunately a hope is all that plan remained.

However, we are now back on track with this and expect to have this final backer reward resolved shortly. Once we have the layout done codes will be issued to backers due to receive a digital copy of Tales of Cthulhu Invictus allowing them to download a PDF of the book for free. We’ll also send the book to the printer at that time. We will keep everyone posted on the progress of this part of the project…

Is is possible to buy a copy of Tales of Cthulhu Invictus is you’re not one of the 420 backers to the Kickstarter campaign? I assume it will be eventually, although so far there are no details at the Golden Goblin Press website.

Stay tuned for more details as they become available.