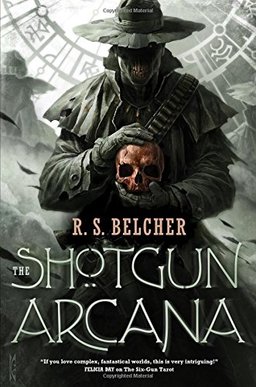 We covered R.S. Belcher’s first Golgotha novel, The Six-Gun Tarot, in April, as part of my review of the current crop of Weird Westerns. Now Belcher returns to the bustling frontier town of Golgotha, Nevada, a place that hides more than its fair share of unnatural secrets, in The Shotgun Arcana.

Don’t know much about this R. S. Belcher fellow. He doesn’t have a website, and his only other publications are two short stories that appeared in Star Trek: Strange New Worlds 9 and Deep Cuts.  A background check on the Black Gate supercomputer reveals that he runs Cosmic Castle, a comic book shop in Roanoke, Virginia, and that Tor.com interviewed him in October. That’s enough to make him alright in our book.

1870. A haven for the blessed and the damned, including a fallen angel, a mad scientist, a pirate queen, and a deputy who is kin to coyotes, Golgotha has come through many nightmarish trials, but now an army of thirty-two outlaws, lunatics, serial killers, and cannibals are converging on the town, drawn by a grisly relic that dates back to the Donner Party… and the dawn of humanity.

Sheriff Jon Highfather and his deputies already have their hands full dealing with train robbers, a mysterious series of brutal murders, and the usual outbreaks of weirdness. But with thirty-two of the most vicious killers on Earth riding into Golgotha in just a few day’s time, the town and its people will be tested as never before — and some of them will never be the same.

The Shotgun Arcana was published by Tor Books on October 7, 2014. It is 400 pages, priced at $25.99 in hardcover and $12.99 for the digital version. The deliciously creepy cover is by Raymond Swanland.

$13 bucks for the digital? That is a little outlandish but I’ll give it a whirl because of two things. 1–I’m from Nevada originally so I like the setting (next best state to Texas) and 2–You recommended it John and I’m a bit hard up for some weird western tales.

By the way, I missed your review of the Six Gun Tarot. Can you read this one as a stand alone or would it be better to read the first book?

They’re written as standalone novels, but obviously reading the first one will give you some familiarity with the characters.

I’d love to know what you think, Ape. Drop by here with a comment when you’ve read it!

I liked Six Gun Tarot. This writer is bursting with ideas and has more stories and characters that he can stuff into one novel. For me, in order to be a weird western it must be a western first and this one fit the bill. I bought the second one and will enjoy it over the xmas vacation. If you like weird westerns this is one you need to have on your shelf or in your kindle.

Six Gun Tarot was good but this book was much better. Six Gun Tarot’s only down check was that there were too many characters and it took a while to boil up to the ending. That was because the author has made a town rich in lore and such that come into play more in this book. These are good reads.

For those of you who like the weird western genre, this series is a must. I’m sure there are more to come and I’ll buy them when they are released.

Thanks for the review Ape!

[…] westerns. But you already knew that, just based on my recent articles on R. S. Belcher’s The Shotgun Arcana, Molly Tanzer’s Vermilion, Guy Adams’s Heaven’s Gate trilogy, and the anthologies […]