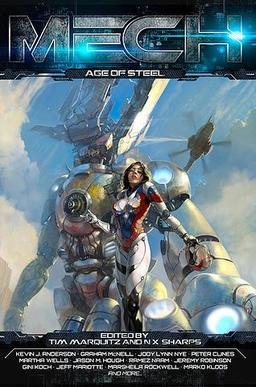 Last year we told you about Kaiju Rising: Age of Monsters, the book that founded Ragnarok Publications. Since then I’ve been very impressed with the astonishing energy from Ragnarok’s founders, Joe Martin and Tim Marquitz. In their first year they released 22 titles, and their recent releases have included Martin’s Blackguards: Tales of Assassins, Mercenaries. and Rogues, which we covered here, Stacey Turner’s Grimm Mistresses, Kenny Soward’s Gnomesaga trilogy, and many others.

Growing up there was only one thing I loved more than giant monsters and that would be giant robots! The anthology will feature a diverse array of tales from some of the genre’s finest talent (including some returning favorites from Kaiju Rising) and each story will be accompanied by a piece of interior art by either Frankie B. Washington or Oksana Dmitrienko (the latter’s work is seen throughout Blackguards: Tales of Assassins, Mercenaries, and Rogues)…

The Mech: Age of Steel Kickstarter campaign will launch in Q3/4 2015 and feature stories from some of the genre’s finest talent.

They’ve already announced a preliminary line-up of authors for the book, and it includes several names that will be familiar to Black Gate authors, including Martha Wells and Jennifer Brozek, as well as Jeremy Robinson, Graham McNeill, C.L. Werner, and many others.

The cover art is by Victor Adame.