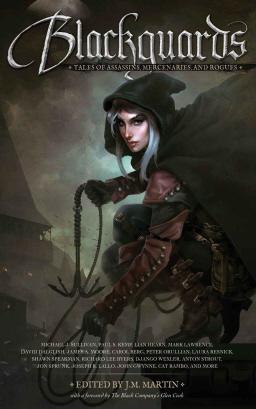 I first heard about the massive Blackguards anthology, which showcases tales of thieves, rogues and assassins, when Laura Resnick wrote a guest post for us last year, “Living Outside Society’s Rules,” talking about her short story “Friendship,” set in the world of her Silerian trilogy and taking place a few years before the first book, In Legend Born.

I was intrigued… but since then I’ve learned that Blackguards contains stories set in over two dozen fantasy worlds, from writers like Mark Lawrence, Carol Berg, Mark Smylie, Django Wexler, Peter Orullian, and many, many more. This is an unprecedented opportunity to sample some of the most popular and innovative fantasy series on the market today, all in one place. Blackguards was edited by J.M. Martin and published this week by Ragnarok Publications. If you’re at all interested in modern fantasy, this volume is an incredible bargain.

Whether by coin or by blood… YOU WILL PAY.

Blackguards contains an introduction by Glen Cool, and 27 stories:

In addition, the eBook edition also contains a companion anthology, The Blackguards Blacklist, with eleven additional stories, bringing the total to 38:

Blackguards was funded by an enormously successful Kickstarter campaign that completed on September 24, 2014, raising $38,631 against a $14,500 goal. One of the stretch goals was interior art (unlocked on August 31), which means the book is also copiously illustrated, with full-page artwork for every story. You can see samples of the interior art here.

Blackguards: Tales of Assassins, Mercenaries. and Rogues was published by Ragnarok Publications on April 26, 2015. It is 746 pages, priced at $9.99 for the digital edition. A print edition priced at $29.95 is forthcoming, and an unabridged audio edition will be available on June 9, 2015. The cover art is by Arman Akopian. Get more details at the Ragnarok website.

Gonna have to dust off the Amazon gift cards and have my wife show me how to use the Kindle.

I know! My first instinct is to wait for the print edition… but the digital version is available NOW.

Found your site and back reading. Saw this today and immediately ordered it. Thanks.

Glad to be of service, Terry! Hope you enjoy it.