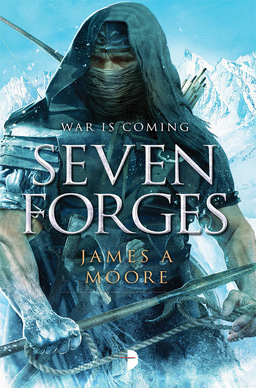 This is your book. The books I’ve reviewed in the Series Series so far have had many virtues, and some of them have been exactly my sort of thing, but in most cases, I’ve had to include a caveat about how they might not be your sort of thing. This time I can say, if you’re a regular reader at Black Gate, the book I’m reviewing is exactly your bucket of grog.

James A. Moore dedicates Seven Forges in part “to the memory of Fritz Leiber and Robert E. Howard for the inspiration.” That dedication sets the bar high, and caused me a bit of readerly apprehension, because so many writers have imitated badly those two greats of the sword and sorcery tradition. Moore is far more than an imitator, though. He does some fresh, counterintuitive things with the genre conventions. More than once, he startled me into saying out loud, “I didn’t see that coming.”

The weirdest thing about this first volume of what will clearly be a series about a total war on a cosmic scale — complete with an entire national pantheon consisting only of war gods — is that most of the book consists of a troubled but earnest effort at establishing peace. Our hero Merros Dulver leads an expedition from a stable empire that hasn’t faced a truly threatening enemy in over a thousand years into the Blasted Lands, where the last batch of now-mythic enemies used to live. The Fellein Empire once mastered sorceries so reminiscent of nuclear weapons, I briefly wondered whether Seven Forges might be far-future science fiction in disguise.

But the people who live on the far side of the Blasted Lands would be right at home in Robert E. Howard’s Hyboria. Conan might have seen in them a civilization he could love — if civilization is the right word for the Sa’ba Taalor. In a hidden valley surrounded by volcanic mountains that are also sort of gods, which are also sort of the ruins of the seven cities destroyed in the distant past, the Sa’ba Taalor have spent the past thousand years in the pursuit of perfect individual excellence in all the arts of war. Their gods saved them from the cataclysm, and ever since, the Sa’ba Taalor have repaid their gods with perfect obedience of divine law, and, for that matter, divine whim. These gods give prophecies, speak directly into the minds of their worshippers, perform geological miracles, and do other, stranger things that remain intriguing mysteries at the novel’s end. Above all, the seven gods of the Seven Forges require constant readiness for ass-kicking. 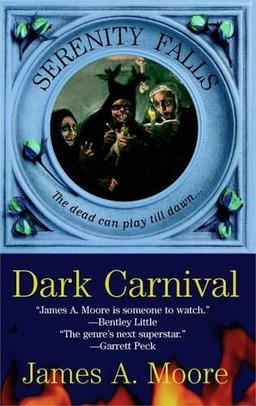 To the unambiguously civilized folk of the Fellein Empire, the active gods of the Seven Forges are baffling. The Fellein gods are still offered lip service, but are of so little importance in the daily lives of their people that their names remain conspicuously unmentioned even by the novel’s end. For all the times we see characters from these two cultures struggling to explain themselves to one another, it never once occurs to Merros Dulver or the other Fellein viewpoint characters to get specific about who their gods are, what they do, or what they require. I am certain this omission is deliberate, and I’m looking forward to seeing in future volumes of this series what happens to the Fellein when war with the Sa’ba Taalor drives them back into the arms of their own forgotten gods.

Moore’s a tightrope walker of a writer. Several times, I stuck a mental Post-it note on something I thought might be a flaw in the book, so I could consider whether to mention it in the review later. And in every case, just when I was beginning to think Moore had lost track of his loose ends, he turned one of those flaws around in a reveal that genuinely surprised me. Here’s one example that will not be too much of a spoiler: For a long chunk of the book, it seemed to me that some of the female characters ought to be more worried about getting knocked up. Their world looked like a challenging place to be pregnant or raise a young child, and the two dalliances in the novel were between sets of characters who were clearly not, in the short term, going to be family material together.

(For the record, I’ve had the same objection to some books written by women. In Jaqueline Carey’s Kushiel’s Dart, a courtesan protagonist gets it on with pretty much everybody, but never once gives a thought to the risk of pregnancy. I can suspend my disbelief about masochism-as-superpower, but not about women in a world without contraception behaving as if they’re in an Austin Powers movie.)

Suffice it to say, two of Moore’s characters who thought their entanglement trivial are going to spend the rest of the series in potentially world-shaping conflict. 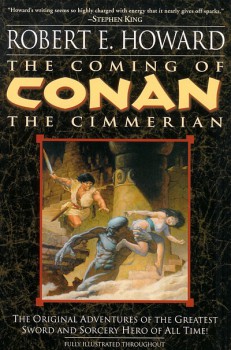 Now, there’s something you wouldn’t see in a Robert E. Howard story. The few formidable heroines in the Conan stories end tragically, and the milksop women who represent civilization and its pitfalls are mostly too unimportant to come to any sort of end at all. James A. Moore spends quite a bit of ink on female characters from both the Fellein Empire and the Sa’ba Taalor, and nearly all of them are characters with competences, flaws, secrets, and inner lives — as are the male characters. They have trajectories of their own, that are different from one another, and they do a variety of things that matter, for good and ill — as do the male characters.  The two most important viewpoints belong to men, Merros Dulver, soldier-turned-diplomat of Fellein, and Drask Silver Hand, sorcerously-cyborged badass of the Sa’ba Taalor — their experiences parallel one another from beginning to end, though ultimately it is Merros’s book. That’s totally fine. This novel is heavy on the testosterone. Fortunately, it has not grown up to be a jerk.

In some ways, Seven Forges is a weird book, a novel-length prologue for a war Moore could have chosen to tell us about with a classic beginning in medias res. That would be the currently fashionable way to tell it, beginning, as they say, with the blood on the floor, with tension high in every scene and ratcheting up with perfect regularity on every page. Books written to that formula sell pretty well. I think he’s doing something more interesting. By showing us an ensemble of characters on both sides of the war that the front cover promises is coming, and introducing us to them during a period of weeks when they are genuinely trying to understand and respect one another, Moore forces us to root for both sides and all figures, even the ones who are most fearsome or least like the selves we wish to be. The viewpoint characters from Fellein will not be able simply to demonize the Sa’ba Taalor when they become enemies. The Sa’ba Taalor have seen that the Fellein are , by their standards, soft, but that softness is not the same as weakness. By the time war breaks out, we know the Fellein are in deep, deep trouble, for all their greater numbers. Oh, these guys are toast, I found myself thinking. But then we see Fellein sorcery through the eyes and reactions of their adversaries, and in that moment, it’s not at all clear who will have the upper hand.

I’ve seen Seven Forges described as a lighter, leaner version of A Song of Ice and Fire, and that’s not a crazy comparison. It’s a lot lighter, and a lot leaner, which many readers will see as a virtue. For people longing for the sprawling puzzle-box complexity of George R.R. Martin’s plots, Moore won’t scratch quite the same itch. That said, Merros Dulver truly understands, from the first page, that his line of work is inevitably tragic. Even when the Sa’ba Taalor make him see how much he loves a good fight, he remembers what they may never have thought of — that his victories cost other human beings in grief and suffering. It’s not his considerable martial prowess that makes him the hero, but his capacity for seeing the perspectives of others. That’s heroic fantasy that can hold, and deserve, my attention, volume after volume.

This books sounds great. I’ll have to check it out….

Yes John … this book sounds great, and it IS great. I completely enjoyed it and cannot wait for the next!

Not to worry, John. James mentioned on Fb that the next one will be titled ‘The Blasted Lands.’

But, things could change… 😉

That’s okay. Now that SEVEN SORCERERS is out there, I’m done with “sevens”…

“And now for something completely different.”

Meanwhile, I look forward to reading about these forges…

John, your Python reference suggests that your next series will be all about threes. : )

Jason, you in particular will find this to be Your Book.