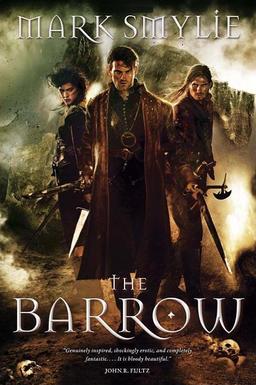 The book mugged me. It was supposed to stay safely several weeks down in my queue while I kept commitments to other law-abiding books that had been waiting patiently for review. Then up walks The Barrow, brazen as you please, distracts me by flashing its jacket copy, and steals two weeks of all my attention right out of my calendar. But what else can you expect from a book full of gangsters, extortionists, rabble-rousers, mercenaries, slumming disgraced nobility, and assorted other low-life types?

I haven’t quite figured out how Mark Smylie pulled it off. The book has some obvious excellences, and some obvious failings, and some oddities that might be mistaken for one only to turn out to be the other. I’ll need to read more of Smylie’s work to figure out what tipped the balance in the book’s favor.

I found most of the characters somewhere between off-putting and odious, and nearly every time the body count went up by one, I was relieved at not having to put up with that character for one page longer. It’s as if Smylie had set himself the task of outdoing George R.R. Martin for grittiness of characterization, and overshot by twenty miles.

There are readers who love that sort of thing; I’m not usually one of them. As the endgame of the novel came in sight, there were only three characters I cared about at all — the enigmatic hero Stjepan Black-Heart, the cross-dressing street fighter Erim, and the disgraced noblewoman Annwyn. I kept coming back to my two snarky rhetorical questions: How are these two women going to survive ten more minutes surrounded by all those sociopaths? And when is Stjepan going to have a male friend who does not suck?

Only it turns out those are the questions that matter most, and several of the glitches I had mistaken for goofs on the author’s part ended up being the keys to the story’s other puzzles.

Why did I mentally flag those keys as authorial errors? We’ll come to that. I want to say first that, although this is Smylie’s first prose novel, he’s had several years of success and acclaim as a writer of graphic novels. If I tried switching artistic forms, I’m sure I couldn’t write a first graphic novel that works as well as his first straight prose novel does. The Barrow is intended as a stand-alone prequel to Smylie’s series The Book of Dooms, which follows the adventures of Artesia, Stjepan Black-Heart’s sister. I haven’t read any of the Artesia material, so I’m a good test case for whether The Barrow can actually stand alone as a story for readers to whom Smylie’s Known World is unknown. My verdict is that it does that, with unambiguous success.

What it doesn’t do so well is function as a work of prose. Smylie’s acknowledgments acknowledge that he set out to write a prose novel because he got too busy running his press to wait around for graphic artists. Fair enough, that’s a good reason to try a new form, but Smylie has rested on his laurels. Some of the skills he needed as a novelist transferred neatly from his other work, while other key skills are simply missing.

The best parts of The Barrow are so good, I wanted to love the whole book as much as I loved them. I’m a connoisseur of funeral-gone-wrong scenes, and the one about a quarter of the way into the novel is as perfect, and perfectly hilarious, a specimen as I’ve seen in any author’s work. It could be spun off as its own short story and stand as a jewel of the genre. There are a few other fine scenes I thought were nearly as strong.

A book that could sustain that level of craftsmanship would be something really special, something that would stand up to many entertaining rereadings and perhaps many years of reflection.

This is not that book.

I wish Smylie had given this novel two more passes of revision, or spent another year of earnest effort to build up his chops at prose style, or worked with an editor who pushed him to grow more as a writer, or … or something. I’m not sure what else would have helped.

Failing those, I wish I could have skipped this book and started with some work that might or might not someday come into being, the not-yet-written book Smylie is capable of growing into.

But why should he bother to do so? That’s not a snarky rhetorical question. It’s a real, practical one. He’s highly regarded in his home art form, and this attempt at writing a prose novel was more a side effect of business success than a pursuit of a creative need. Why would a writer for whom that was true put himself through a couple of years of cultivating beginner’s mind, backtracking to struggle through apprentice work in somebody else’s art form?

The macro-level stuff, Smylie can already do, but the micro-level stuff that makes the sustained waking dream of fiction possible is just not there. In my capacity as Dr. Pretentious, I would prescribe all the exercises in John Gardner’s The Art of Fiction that address word choice, sentence construction, voice, and viewpoint.

I’d also prescribe a month-long immersion in poetry. Not a crash course, but a reading binge, an intoxicating bender, consuming poetry of as many different ages and styles as he could get his hands on. When he recovered from his word-hangover, Smylie would be a lot closer to achieving some of the effects he’s clearly aiming for. If it would help, he could start his bender with Charles Bukowski and the Earl of Rochester.

The cast of characters in The Barrow ranges from near-royalty to the intermittently homeless, from world-class scholars to illiterates. To make all those voices feel authentic, a writer would need to be able to write from the inside of all those levels of formality, and to switch from one mode to another instantly without jarring the reader. It’s not easy, and most writers these days are simply unable to write in the high formal style without sounding and feeling fake. If the only models of the high formal style you’ve absorbed come from pop culture or latter-day imitations, you won’t have that style to draw on in the sentences where you need it.

Smylie’s dialogue sometimes doesn’t even read like pop culture, so much as it reads like table talk in a really great RPG campaign. The characters have their moments as believable versions of the people we’ve been told they are, and then suddenly, blamm-o, they’re commenting on their performances of themselves in ways that blatantly break the fourth wall, in just the way that gamers do when they’re especially pleased with how they’ve just played their characters. At those moments, I was thrown entirely out of the waking dream of the story, which would have been completely appropriate if the book had been aiming for a postmodern or slipstream effect, but I’m certain that wasn’t the intent. There’s nothing inherently wrong with being influenced by gaming as a storytelling medium, but I found it distracting when one of the villains seemed to be winking at the reader, lamenting repeatedly that she had rolled the bones, and her roll would make it impossible for her to do something she wanted to. It felt as if she were complaining to her GM, so much so that my brain started modeling all the characters on stage in the four gaming systems of my youth, when clearly the author wanted me to be swept away by the pacing of a fight scene.

Add to that the numerous word-choice problems and you can see why the anomalies in the story’s world that were supposed to be clues looked to me like authorial mistakes. The most notable moment was when a character in a medieval-technology world who holds the reins of a horse-drawn wagon traveling over open fields thinks to herself that it’s not so bad, that the rough spots in the ground are telegraphed far enough in advance for her to direct the horses around them. Can this character, who has no education and no interest in science or magic, imagine telegraphy, let alone compare something else to it? Smylie’s worldbuilding is so richly detailed, and intermittently so immersive, that the moments when his word choice disrupts it are painful. Right then, I longed to reach into the alternate universe where Smylie gave his manuscript two more drafts, to read the book this could have been.

The book in its most perfect form of itself would still not be to every reader’s taste. The violence and sex are extremely graphic. The sex scenes are more frequent than you usually see in epic fantasy, and the descriptions in them tend to go on just a beat or two longer than the story requires, as if the author doesn’t quite trust the words to make up for the lack of pictures. For some readers, this will be a virtue, a sort of grace note. For readers who need to watch for trigger warnings, it’s hard to imagine a trigger warning emphatic enough to convey just how disturbing some of these scenes are. The villains are villainous in every dimension of their lives, including the sexual, and some of the more sympathetic characters aren’t much better. This is a deliberate authorial choice, carried out effectively and systematically. Whether that makes this more your book or less your book, only you can say.

For all that this is a mixed review, I’m rooting for Mark Smylie. I hope The Barrow does well enough, and satisfies him enough as a creator, for him to return to prose fiction and master it. Meanwhile, I will certainly be checking out the first volume of The Book of Dooms.

Thanks for bumping this up the review schedule Sarah. I’ve been eye-balling this one too. I appreciate your input – it hasn’t turned me off, but it has satisfied my curiosity on whether I should read it sooner than later.

I’ll wait. I’ve plenty to read right now, and just finished Mark Lawrence’s Prince of Thorns, which this reminds me of…and while I intend to finish the Thorns series, I’ve no real strong desire to stay immersed in such depressing tales. The cover and cover text grabbed me, but I also hesitated just enough to want to hear from someone else. I appreciate your examination’s excitement and caution.

I still remember Neil Gaiman’s transition from graphic novel author to prose author and being astonished that – yes – he could actually write.

I find a lot of modern fantasy problematic in this regard (ie, an often unsuccessful fusion of contemporary idioms with a more traditional prose style). I guess your post struck a chord because I’ve just read a story by Garth Nix – ‘Holly and Iron’, maybe you’ve heard of it? It had a strong concept and the prose was always solid and workmanlike, without ever taking flight. A pity, because if it had done so, I reckon the story might have been a real classic.