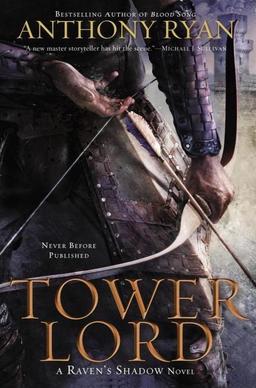 I have a pretty standard routine when I wander the aisles at book stores. It goes like this.

Seriously. Happens every time. Most recently, it happened with Anthony Ryan’s second novel Tower Lord, which drew me in with the title alone (Wait, Tower Lord? Like some guy with no kingdom, just a kick-ass tower? That rocks!) What can I tell you, I’m a man with simple needs.

Vaelin Al Sorna, warrior of the Sixth Order, called Darkblade, called Hope Killer. The greatest warrior of his day, and witness to the greatest defeat of his nation: King Janus’s vision of a Greater Unified Realm drowned in the blood of brave men fighting for a cause Vaelin alone knows was forged from a lie. Sick at heart, he comes home, determined to kill no more. Named Tower Lord of the Northern Reaches by King Janus’s grateful heir, he can perhaps find peace in a colder, more remote land far from the intrigues of a troubled Realm.

But those gifted with the blood-song are never destined to live a quiet life. Many died in King Janus’s wars, but many survived, and Vaelin is a target, not just for those seeking revenge but for those who know what he can do. The Faith has been sundered, and many have no doubt who their leader should be. The new King is weak, but his sister is strong. The blood-song is powerful, rich in warning and guidance in times of trouble, but is only a fraction of the power available to others who understand more of its mysteries. Something moves against the Realm, something that commands mighty forces, and Vaelin will find to his great regret that when faced with annihilation, even the most reluctant hand must eventually draw a sword.

Yup, yup, Darkblades, realms in chaos, weird magic. Whatever. They had me at “Tower Lord of the Northern Reaches.” I’ve been blindly seeking the wrong material possessions my entire life. I don’t even remember what I wanted before I saw this book. All I want now is to be a Tower Lord. I could have my own zip code.

Tower Lord is the second novel in the Raven’s Shadow series. Aw, hell. The first book is… lemme look. Blond Song. Just came out in paperback. No towers in this one. Come on.

Why do you do this to me? Do I read the (totally towerless) first volume, or just suck it up and jump in to Tower Lord first? I’m telling you, being a fantasy fan is not as easy as it looks.

This series does look promising. Tell us what you find!

Now, by title alone, I’d have guessed Blood Song was a vampire romance, so that book is one you can make your case in point when explaining the importance of cover art. On the one hand, I like the visual juxtaposition of mighty armor and life-threatening vulnerability. On the other hand, somebody tell that guy to put on a shirt under his plate mail!