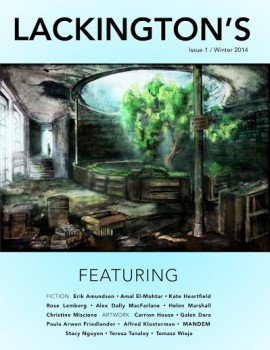 Kate Heartfield opens Lackington’s first issue in a forgotten boneyard in “Their Dead So Near.” Heartfield’s imagery is powerful and the themes a bit disturbing, compounded by a slight meta-fictional worry on my part that the work might actually be based in part on a true story.

Nebula-nominated Amal El-Mohtar follows with “Mon Pays C’est L’Hiver,” a beautiful piece of prose poetry. “An Orange Tree Framed Your Body” by Alex Dally MacFarlane is less consciously poetic in its voice and draws its power from the symbolism of name and imagery in a suspense story of terrorists in a faux-Europe.

Erik Amundsen offers the science fiction story “On Every Boy’s Skin (All the Stars Ever, Also Bones),” which felt Bradburian in its introspective observation at a far away listening post.

These stories were all good and then “Death and the Girl from Pi Delta Zeta” by British Fantasy Award winner Helen Marshall blew the barn doors off. Imagine if you will, a sorority-fraternity setting, in pitch-perfect voice, telling the love story of Carissa and Death… whose real name happens to be David. Marshall’s created world charms with passages like:

He brings her flowers first. These flowers are not ironic. They are not lilies. They are not roses with petals dyed to black velvet. They are not grave myrtle, cut-finger, vervain, deadnettle or sorcerer’s violets. They are not death camus or flower-of-death. Death hates irony.

And “A City of Its Tentacles” by Rose Lemberg was artful and brilliant. The voice and imagery are powerful and I knew this wasn’t a regular story halfway through the first paragraph, when I read “…reminded [her] of baby rainworms decaying by the roadside in the spring.”

The amount of uncommonly evocative imagery reminded me of magical realism, or some of the most powerful passages from Helen Marshall’s Hair Side, Flesh Side collection or Amal El-Mohtar’s poetry from Honey Month. The fact that those latter two authors are also in the debut issue gives you a sense of the force of the editorial vision behind Lackington’s.

I don’t want to say much about “Tentacles” other than to say it is well worth savoring and rereading, and that the evocative style is not a simple artistic choice, but a thematic one whose purpose is revealed later in the story.

Lackington’s has succeeded in offering something different and worthwhile to the world. I’ve already bought and downloaded the second issue (which has a story by Sofia Samatar, whose “Selkie Stories are for Losers” I’ve previously blogged about and was also nominated for the Nebula, the Hugo and the BSFA Award) and will be reading it this weekend.

I recommend it to anyone who enjoys literary fantasy and if you don’t know if you do, this is a great place to try. The Marshall and Lemberg stories alone are worth the $2.99 cover price.

Derek Künsken writes science fiction, fantasy and horror in Gatineau, Québec. You can find out more about him at www.derekkunsken.com and @derekkunsken

RoseLemberg.net » Poetry sale and a review

[…] new review of “A City on its Tentacles” (Lackington’s, #1) has appeared in Black Gate. The reviewer has very complimentary things to […]

[…] also doesn’t include magazines we cover only irregularly, like Cemetery Dance, Lackington’s, The SFWA Bulletin, and the marvelous (but erratically published) Adventure Tales, or magazines […]

[…] Gate blogger Derek Kunsken was the first to alert me to the birth of new online market Lackington’s last June. The Ottawa-based magazine is edited […]