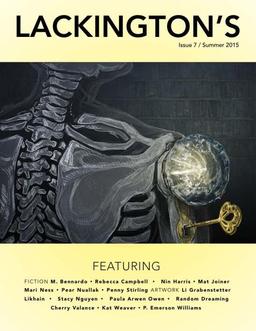 Black Gate blogger Derek Kunsken was the first to alert me to the birth of new online market Lackington’s last June. The Ottawa-based magazine is edited by Ranylt Richildis and appears four times a year; it publishes art and speculative fiction between 1,500 – 5,000 words in length. It has produced seven issues, like clockwork, which had me counting on my fingers… have there really been that many quarters since last June?

Anyway, it’s high time I started paying attention to this fine magazine, adding it to our regular magazine coverage, and answering some of your questions. Questions like, “Who the heck is Lackington?” That riddle is answered on their Donate page:

Once upon a time, a British bookseller named James Lackington made books affordable for nearly everyone. It was the late eighteenth century, literacy was on the rise, but books were still a luxury item for many Londoners. Lackington changed that by popularizing the cheap “remainder” and making a tidy profit for himself, in the bargain.

We’ll never make a profit at Lackington’s Magazine. Our principles, in fact, have us in a bind. We want to keep content accessible to everyone, the way Lackington did. But we also want to pay contributors, because we believe creative labour must be compensated. To do so, we rely on donations to buy stories and art. Help keep this project afloat, support creators, and ensure we remain open to anyone with an internet connection.

Lackington’s has an emphasis on prose that I think is refreshing. This is from their About page:

We want to help widen the space for prose poetry. We’re looking for stylized prose. Not inept purple prose, of course, but controlled and well-crafted wordsmithery that reflects the story, setting, theme, atmosphere, or philosophy it seeks to describe.

Stylized prose can be sparse and simple, diamond-cut like the writing of Ursula K. Le Guin. It can be sumptuous like the writing of Oscar Wilde. It can be epic, archaic, experimental, mythic, rhythmic, and it can be quiet and subtle, too. Story and character are indispensable, but so is wordcraft. We trade in aesthetics, so make us gasp with unexpected words and give us inventive voices, structures, and narratives. Many editors reject heavily stylized prose out of hand. We welcome it. 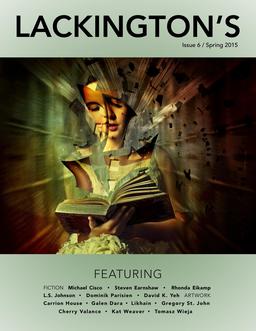 Every issue of Lackington’s has a theme, which I think is kind of interesting. The theme this issue is “Skins.”

The stories in Issue 7 focus on “Skins,” which make us think about bodies, of course, but also shapeshifting, torture, disease, and sex. You’ll find seven tales in Issue 7 that touch on all of these in rich, transportive language.

Here’s editor Richildis on the contents of issue #7:

It’s no surprise that our “Skins” issue summoned stories about shapeshifting. The ability to utterly transform one’s skin is part wish fulfillment and part stuff of nightmares, depending who you ask. If we find comfort in the familiarity of our own face and form, we just as likely crave the experience of escaping what pins us to our person. A shift from human form to animal (or bird or fish or bug), a shift from the material to the immaterial, a shift from one sex to another — wouldn’t it be nice? Wouldn’t it be fraught with implication?

The tales herein dig well beneath the surface on these matters, but they do it in the service of tactile speculative writing and colourful prose. This collection tells stories about obsession, ego, aesthetics, power, family, loss, race, gender, colonization, and tradition, and these themes come wrapped in the skins of outrageous fantasy: demonic titans, human canvasses, disembodied souls, interplanetary travel, alien parasites, folklore ghouls, and were-people all make an appearance here. This issue is larger than usual — seven stories for the seventh issue — because we received so many strong submissions we simply had to publish.

Foreword by Ranylt Richildis
“The Skinner of the Sky,” by M. Bennardo
“Kin, Painted,” by Penny Stirling
“Facing the Wind,” by Mat Joiner
“The Glad Hosts,” by Rebecca Campbell
“She Shines Like a Moon,” by Pear Nuallak
“Sometimes Heron,” by Mari Ness
“Sang Rimau and the Medicine Woman,” by Nin Harris

The cover artist this issue is Kat Weaver (click the image for a bigger version.)

We last covered Lackington’s with Issue #1.

Lackington’s is edited by Ranylt Richildis. It is available completely free online; individual issues are available in multiple digital formats for $2.99. 4-issues subscriptions are just $9.99 (roughly $2 off cover price). Purchase copies and support the magazine at their website.