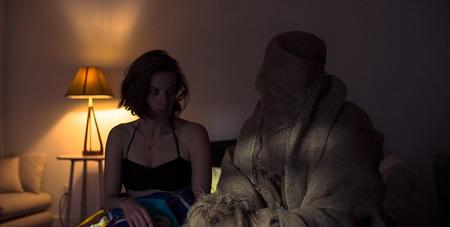 You can always count on interesting offerings from the Toronto International Film Festival. Founded in 1976, “TIFF” is now one of the most prestigious events of its kind in the world, considered second only to Cannes in terms of high-profile pics, stars and market activity.

Screening close to 400 films each season, just a few of the notables which launched at TIFF include American Beauty, Slumdog Millionaire and The King’s Speech, all of which went on to win Best Picture at the following Oscars.

So perhaps we should entertain such hopes for Lace Crater, an indy film which made its debut at TIFF on Tuesday.

Being billed as a lo-fi, horror-comedy, the trailer teases the story of an awkward young woman (Lindsay Burge) who gets a sexually transmitted disease from a ghost. That’s right: this woman has sex with a ghost and suffers the consequences.

And you thought your twenties sucked.

All Ruth wanted was to get away for the weekend. Escaping to the Hamptons with friends after a bad breakup, she finds an unexpected connection with Michael, a stranger who shows up in her room one boozy night. They have great chemistry, and she finds herself inexplicably drawn to him. There’s only one problem: Michael’s a ghost, and a one night stand with him leaves Ruth with aftereffects that can only be described as supernatural. As she suffers through mucous-laden night sweats, glitchy hallucinations, and the occasional tar-black ooze, her friends become too disgusted to support her. Ruth must figure out for herself if she can reintegrate into society — or if she even wants to.

Okay yes, Googling “STD, sex, ghost” is somewhat amusing, except to some of the people I mingle with. But I say either do it all serious like Anne Rice did in The Witching Hour or all funny, like remaking an X-rated High Spirits.

I see straight-to-Netflix in the future…

You Google searched….STD, sex, and ghost??? If you aren’t careful GC you are going to end up in an off the grid NSA interrogation room.

I know that supernatural romance novels are now all the rage but what does that meet the parents moment look like? Mom, dad, this is Anektukhem the late late builder of the Xerxes pyramid. Can you imagine what her living ex boyfriend must be thinking? What’s he got that I ain’t got? I mean, should he seek a psychologist or a medium for advice? Also, what happens is the ex boyfriend in a jealous rage hires an exorcist? I mean….technically, no death, no crime….but you know….I bet supernatural love has its problems beyond just the living/undead thing.

Dearest Ape, you and your sweet talk with all that interrogation room imagery. Stop teasing.

My guess is a ghost wouldn’t want to stay over and make breakfast, take long walks on the beach or (perish the thought) do something cute on “Sweetest Day”.

That said I’ve made myself a martini and am dragging out my Ouija board now. Thanks for getting me in the right frame of mind.

I can’t even comment here, just too much that could go wrong 🙂