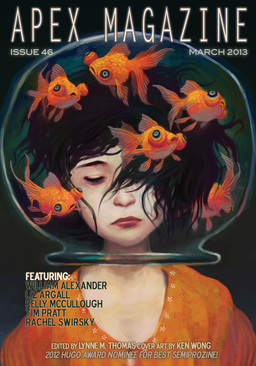 I have gone through phases of reading adventure fantasy, planetary romance, smoke and sorcery and epic fantasy. These sub-genres pack serious power.

Adventure fantasy is an adrenaline hit. Planetary romances like A Princess of Mars are shots of heroic wish fulfillment. And smoke and sorcery wallow in the grit of a spaghetti western.

I also go through phases where I’m looking for the emotional power and the subtle voice and character work of more literary fantasy. I recently read three pieces of short fantasy that hit me hard for different reasons. All are available online for free.

The first was “If You Were My Dinosaur, My Love” by Rachel Swirsky, Apex Magazine, March, 2013. Swirsky’s whimsical voice captivates the reader with a sing-song charm, but subversively so. The very brief story rolls faster and faster down a hill, on its way to a powerful cliff.

Here’s a sample to give you a taste of its romantic, earnest strangeness:

If you were a T-Rex, then I would become a zookeeper so that I could spend all my time with you. I’d bring you raw chickens and live goats. I’d watch the gore shining on your teeth. I’d make my bed on the floor of your cage, in the moist dirt, cushioned by leaves. When you couldn’t sleep, I’d sing you lullabies.

[Click either of the magazine covers for larger versions.] 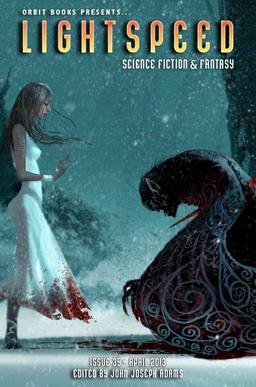 Second was “Selkie Stories are for Losers” by Sofia Samatar, Strange Horizons, January, 2013. This was a powerful story about abandonment, about those left behind when those they love find a way to go home.

A thematic key line is that this is about “losers stuck on the wrong side of magic.” The voice is strong, trying to convince itself that everything is going to be okay, written in potent, evocative detail and the bubbling, tumbling pace of the voice swept me up.

“Selkie Stories” built its theme, reaching a tremendous punch at the end which echoes through the whole story: “No one loves you just because you love them. What kind of fairy tale is that?”

Third (but not least) was Karin Tidbeck’s “A Fine Show on the Abyssal Plane” from Lightspeed, April, 2013.

I listened to this one a few months ago and then went back and read it again recently. While the voice is less defined than the first two stories, the layers of meta-story (three or four by my count) drive the reader to second guess and reinterpret as the story goes on.

Layers peel away and are replaced, creating as once disorientation and surreal wonder in the reader.

The three stories, read together, make a fascinating and satisfying meal for readers of epic fantasy and sword and sorcery, who are looking for a night out with a bit of change for the palate. Check them out.

[…] are amazing pieces of literature that also appear on the Nebula ballot and I discussed them in a previous post. I nominated both stories for the Hugos and Nebulas because both carry such impressive emotional […]

[…] issue (which has a story by Sofia Samatar, whose “Selkie Stories are for Losers” I’ve previously blogged about and was also nominated for the Nebula, the Hugo and the BSFA Award) and will be reading it this […]