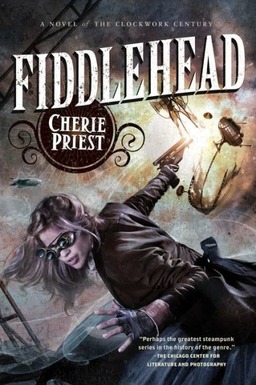 I’m extremely intrigued by Cherie Priest’s The Clockwork Century series, and have been ever since the first volume, Boneshaker, appeared in 2009 and was nominate for both the Hugo and Nebula awards.

The only thing holding me back, of course, was the fact that it was incomplete. But now the fifth and final volume, Fiddlehead, has arrived, and by all accounts it brings the Priest’s ambitious steampunk series to a rousing conclusion.

The American Civil War has dragged on for two bloody decades as the South, aided by fantastic steam-powered machines and Texas technology, has avoided defeat again and again. Leviticus Blue’s incredible Bone-Shaking Drill Engine accidentally destroyed much of downtown Seattle, unearthing a subterranean vein of blight gas in the process, and a desperately-constructed wall around the city is the only that that keeps hordes of the living dead enclosed.

Now a deadly yellow drug from Washington has begun to circulate through the ravaged country… and genius Gideon Bardsley — who has constructed Fiddlehead, the first thinking machine — dares to ask his creation who is going to win the war…

Young ex-slave Gideon Bardsley is a brilliant inventor, but the job is less glamorous than one might think, especially since the assassination attempts started. Worse yet, they’re trying to destroy his greatest achievement: a calculating engine called Fiddlehead, which provides undeniable proof of something awful enough to destroy the world. Both man and machine are at risk from forces conspiring to keep the Civil War going and the money flowing.

Bardsley has no choice but to ask his patron, former president Abraham Lincoln, for help. Lincoln retired from leading the country after an attempt on his life, but is quite interested in Bardsley’s immense data-processing capacities, confident that if people have the facts, they’ll see reason and urge the government to end the war. Lincoln must keep Bardsley safe until he can finish his research, so he calls on his old private security staff to protect Gideon and his data.

Maria “Belle” Boyd was a retired Confederate spy, until she got a life-changing job offer from the Pinkerton Detective Agency. Pinkerton respects her work, despite reservations about her lingering Southern loyalties. But it’s precisely those loyalties that let her go into Confederate territory to figure out who might be targeting Bardsley. Maria is a good detective, but with spies from both camps gunning for her, can even the notorious Belle Boyd hold the greedy warhawks at bay? 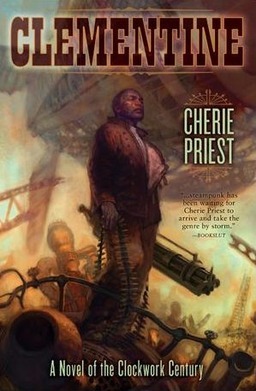 [Click on either of the images in this article for larger versions.]

Clementine told the story of Maria’s first job for the Pinkerton National Detective Agency in Chicago — tracking down the notorious Captain Croggon Beauregard Hainey, a runaway slave in violent pursuit  of the airship The Clementine, as it carried a top secret load of military essentials across the Rockies to Louisville.

Clementine is now available as an inexpensive trade paperback, but most readers of the Tor editions of The Clockwork Century are unaware of its existence. Reading Clementine isn’t essential to enjoying Fiddlehead, but if you’re the kind of reader who hates to miss out on any of the story, consider yourself warned.

Another intriguing aspect of The Clockwork Century novels: each focused on a different main character, showing the vast conflict from a unique angle. There are lose connections between each book, and the events in the earlier books set the stage for the later ones, but if you’re expecting a traditional fantasy series — again, consider yourself warned.

Fiddlehead was published November 12 by Tor Books. It is 366 pages, priced at $14.99 for the trade paperback and $9.99 for the digital edition. See the back cover here.