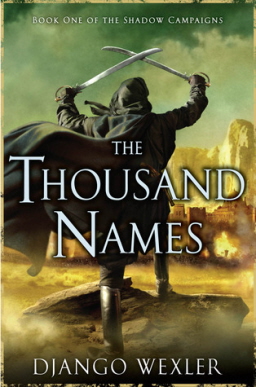 When I was younger, I had very specific criteria for selecting fantasy reading material. I relied exclusively on the jacket copy, blurbs, and author reputation. But after reading numerous crummy books, I decided to switch things up a bit, and only buy books with great cover art.

That worked pretty well for about a decade. By the time I was 40, I’d refined my cover selection process even further. Now I base it almost solely on color. Lush greens and gold — that’s the ticket for the best in fantasy entertainment. Take it from the voice of experience.

Based on the excited buzz around Django Wexler’s The Thousand Names, and the righteous color scheme on the cover, I expect great things. But here’s the jacket copy in case you want to decide things the old fashioned way.

Captain Marcus d’Ivoire, commander of one of the Vordanai empire’s colonial garrisons, was resigned to serving out his days in a sleepy, remote outpost. But that was before a rebellion upended his life. And once the powder smoke settled, he was left in charge of a demoralized force clinging tenuously to a small fortress at the edge of the desert.

To flee from her past, Winter Ihernglass masqueraded as a man and enlisted as a ranker in the Vordanai Colonials, hoping only to avoid notice. But when chance sees her promoted to command, she must win the hearts of her men and lead them into battle against impossible odds.

The fates of both these soldiers and all the men they lead depend on the newly arrived Colonel Janus bet Vhalnich, who has been sent by the ailing king to restore order. His military genius seems to know no bounds, and under his command, Marcus and Winter can feel the tide turning. But their allegiance will be tested as they begin to suspect that the enigmatic Janus’s ambitions extend beyond the battlefield and into the realm of the supernatural — a realm with the power to ignite a meteoric rise, reshape the known world, and change the lives of everyone in its path.

The Thousand Names was published today by Roc Books. It is 513 pages in hardcover, priced at $25.95 ($12.99 for the digital edition). It is the first novel of The Shadow Campaigns.