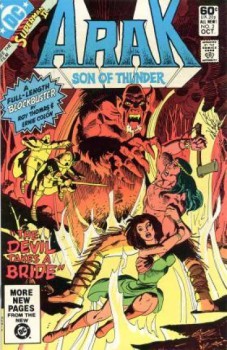 See that nine-year-old boy spinning the revolving comic-book rack, seeking out the most lurid covers of monsters and aliens and skeletons in battle fatigues. He’ll rifle through his pocket for some quarters to buy the latest issue of Weird War Tales or House of Mystery or Arak, Son of Thunder.

See that forty-year-old man picking up a thirty-year-old issue of Arak, Son of Thunder, its cheap newsprint pages now yellowing, the staples loose, an older but still potent artifact promising strange adventures and magical mayhem in dreamed-of faraway lands.  This relic of boyhood — the feel of the thin paper; the primitive, splotchy look of the four-color panels; even the smell of it — brings back inchoate memories and associations of a simpler, more carefree time when his future was expanding, not shrinking, when everything was out there to be gotten, not closing in to get him. 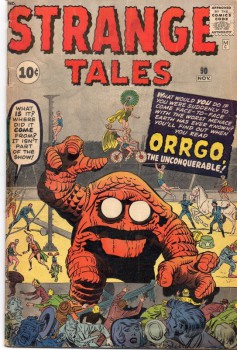 Something as simple as a comic book can be the bridge between the boy and the man, reminding him that he is still the same being, the same conscious self who lived those years and is living these years and lived all the years in between. It is why, even though he doesn’t collect Star Wars figures, he’d love to hold again a 1978 Kenner Snaggletooth (that little guy from the Mos Eisley Cantina), because he can remember the feel of it in his hands, out in the sandbox at recess, when it was one of the most prized possessions in the world (along with Walrus and Hammerhead).

These, then, are our totems, and the old comics our sacred books.

So let’s get to the second installment of Arak, Son of Thunder, shall we?

Before we get to the story proper, I have to note that in the back-page editorial (entitled “How Arak, Son of Thunder Came to Be [Or: What’s That American Indian Doing in Europe in the Late Eighth Century, Anyway?]”), writer Roy Thomas makes a surprising confession: “I don’t really like ‘sword-and-sorcery,’ you know.” No, I didn’t know that. Given that he made a career of writing it, I never woulda guessed it. He goes on to explain some of his beefs with the genre:

“My prejudices against the genre . . . go back to the halcyon days of the 1960s when I, along with thousands upon thousands of other people, first perused the works of Tolkien, Howard, Moorcock, Leiber, and others during the sword-and-sorcery paperback boom of that period. To me, glancing through an occasional title, S&S came to mean things like Magical Swords far more worthy of continued series than most of their owners…brainless barbarians who wouldn’t have lasted ten seconds in battle with a well-trained Roman legionary, let alone against the sinister intelligentsia known as ‘wizards’…limited roles for both men and women, especially the latter, who seemed all to be either luscious maidens, beauteous warriors, or astonishingly lovely witches.”

Thomas goes on to admit, “Eventually, as I got into the genre, I began to realize that this could all be fun in its way — and that, besides, its limits could be stretched, played with, even permanently expanded here and there.”

When he agreed to pen a sword-and-sorcery title for DC Comics, he wanted it to be rooted in the real world — to be “quasi-historical,” yet with the requisite monsters and demons and sorceresses so emblematic of the genre. He came up with a workable premise with the world of Arak; he also notes that Arak may be the “most fully American” sword-and-sorcery figure, given his origins as a Native American. I am not familiar enough with the whole breadth of the genre to know if that is a reasonable claim — perhaps other readers here at Black Gate can weigh in on that.

Issue 2 delivers a standard S&S tale, a one-off adventure that is nevertheless rollicking-good entertainment and that also introduces a supporting character.

Two days after Arak saw his fellow Vikings all slaughtered variously by vengeful monks and by the sea serpent summoned up by Angelica the sorceress, he is caught up in another storm while on his way to the court of Carolus Magnus, King of the Franks. This storm sinks his boat and leaves him stranded on a small peninsula ruled by Lord Hessa and his comely daughter Corrina.

So we have the promised sexy sorceress this issue, but not Angelica. Raven-haired Corrina fits the bill here. We also learn that Lord Hessa is part man/part devil (he’d be a Tiefling in D&D, right?), and his daddy shows up at the end, who is all devil — so can you guess who mommy might be?

Corrina, with her retinue of armored knights, finds him washed ashore, and she takes him back to her father. Her father is about to have him summarily dispatched; however — Arak is now two-for-two in situations where the male in charge simply wants to kill him, but a powerful female intervenes to keep him alive for her own purposes.  This guy is like Johnny Depp to the ladies (Johnny Depp as Tonto, natch!).

So, to please his daughter, Lord Hessa decrees that Arak be tossed into the “donjon.” Arak isn’t keen on that. Freeing himself of his bonds, he tussles with the armored guards, only to make the shocking discovery when he knocks off one’s helmet that they are empty suits of armor! The sorcery at work here stuns him just long enough to be overpowered and recaptured, and to the donjon he goes. Which is actually fortuitous, because there he meets Lord Hessa’s other prisoner, a wizened old magician named Malagigi, court wizard to Carolus Magnus (who, coincidentally, Arak was just on his way to see!). This wry old fellow seems like he might be an important player in Arak’s unfolding hero’s journey. Malagigi attempts to issue a few warnings to Arak about lovely Corrina, but every time he tries, he goes into a coughing fit — obviously some devious magic is at work.

Malagigi does manage to provide Arak some key information for defeating the animated suits of armor, cleverly getting around the magical gag order by cryptically suggesting Arak ask the suits of armor “if they can fly.” Arak decrypts this later on, discovering that if he lifts a suit completely off the ground, it loses its magic and falls apart.

However, Arak has to discover the horrible secret of Lord Hessa’s dysfunctional devil-family on his own. 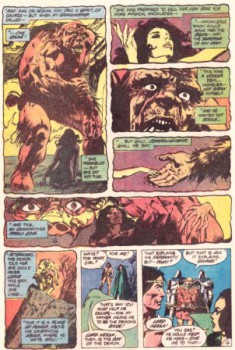 Sure enough, Corrina shows up to, well, ask Arak out on a date. Drawing Arak to a secluded promontory overlooking the peninsula, ostensibly so she can experience for the first time the touch of a man, she reveals her story (and it’s a story that will prove to be a story in the other sense of the word — a fabrication, at least partly). Her grandmother, we see in flashback, was a peasant wench who “grew tired” of being used by men and so learned the dark arts to summon up a devil (you go, grrl! I think I like grandma already — empowering herself so she can throw off the sexual bondage of the patriarchy). She calls up a minor devil who takes a shine to her — so she exchanges her use and abuse by men for use and abuse by infernal entities (back in those days, that deal was probably six of one, half-dozen of the other). Corrina seems to prefer the ministrations of her new bad-boy beau…

…and let me take a moment here to mention with some amount of surprise that one of the panels (reproduced above) depicts woman/devil intercourse! How did this stuff get past the Comics Code Authority? I flipped back to the cover just to be sure, and there it was, that reliable seal of the CCA, ubiquitous on all but underground comics from the ‘50s through the ‘90s. Vertigo was still a few years away, as well as the eventual dismantling of that ratings board, but I’m guessing that by the early ‘80s they were already a pretty lax and toothless token gesture. When the Comics Code was first implemented, I doubt a comic like Arak would have been conceivable.

Anyway, back to the big reveal. Corrina, it turns out, is not her grandmother’s granddaughter; she is her grandmother. Or put more simply, part of her bargain with the devil was youthful immortality. She fed Arak the story of her being the granddaughter and of her “daddy” Lord Hessa planning on giving her over to her grandmother’s devil-lover in order to evoke his sympathy. Daddy Hessa is actually her son — hence the half-infernal lineage. Soon enough, she makes clear to Arak that her real motivation is that after sixty years imprisoned here by her devil-husband and her son above hubby’s underground abode, she’s feeling a little cooped up and wants a little space. Okay, I get it — she’s feeling smothered, and wants a chance to cash in some of those bonus miles without being told by Satan that every date and destination is blacked out. Her lusty come-ons and the business about being a virgin were all, she emphasizes, just to “use Arak,” because since she has had devils for lovers, she doesn’t even find Arak tempting (ooo, burn). Does she really have to rub that in? Arak never did anything to her, except help her escape.

But can we all say in unison what happens when someone who has made a pact to keep their youthful good looks breaks that pact? Right, on the count of three…As soon as she steps over the invisible boundary of her magical prison, she immediately ages sixty years.

All is not lost, however. The ground suddenly splits open and from the fiery depths daddy devil arises, proclaiming his everlasting love for Corrina (well, at least declaring he is not yet tired of her). They renew their vows; Corrina reverts to the hottie she was; and she sinks down into the pit with her devil lover, a maniacal grin on her lips. So we have a happy ending, with lovers reconciled and everything restored to its unnatural order. (She is unmoved, apparently, by the fact that her once-again-older-than-her son just got burnt to a crisp in the exchange. So she was pretty evil — and are we going to stick to the all-witches-are-always-evil stereotype of S&S in this series, despite Thomas in his editorial claiming he liked to expand on or challenge such tropes in his fiction?)

Malagigi (Gigi for short?) now appears, free of the dungeon and un-ensorcelled, and offers to accompany Arak to the court of the king. Perhaps Malagigi will fill the role of mentor, the wise old wizard/guide so common in heroes’ journeys. Time will tell. Be here next week for “Sword of the Iron Maiden”!

Loved your intro to this one, Nick. I could so completely relate…

Thanks, guys — a salute to my fellow Gen X-ers. We do have the coolest name of any generation, and I think that fitting.