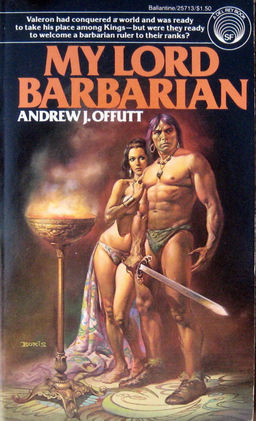 Andrew J. Offutt had a lengthy and successful career as a fantasy writer before his death on April 30, 2013 (which we reported on here.) He was one of the most popular writers in the Thieves World collective, with a trio of novels (Shadowspawn, Deathknight, and The Shadow of Sorcery), and his Conan pastiches, including Conan and the Sorcerer (1978) and Conan: The Sword of Skelos (1979), were highly regarded.

He also had an excellent reputation as an editor, in part due to his sword and sorcery anthology series Swords Against Darkness.

Offutt published fantasy under his own name, but the greater part of his output — chiefly early pornography — was written under a variety of pseudonyms. When he died he left his papers to his son Chris Offutt, who reports on his father’s unusual career in the Feb 5 issue of The New York Times Magazine, in an article titled “My Dad, the Pornographer.”

At 12, Dad wrote a novel of the Old West. He taught himself to type with the Columbus method — find it and land on it — using one finger on his left hand and two fingers on his right. Dad typed swiftly and with great passion. In this fashion, he eventually wrote and published more than 400 books. Two were science fiction and 24 were fantasy, written under his own name; the rest were pornography, using 17 pseudonyms… His primary pseudonym [was] John Cleve…

In the 1980s, John Cleve’s career culminated with a 19-book series for Playboy Press, the magazine’s foray into book publishing. The Spaceways series allowed him to blend porn with old-time “space opera,” reminiscent of the 1930s pulps, his favorite kind of science fiction. Dad’s modern twist included aliens who possessed the genitalia of both genders. Galactic crafts welcomed the species as part of their crews, because they were unencumbered with the sexual repression of humans and could service men and women alike. The books were popular, in part, because of their campiness, repeating characters and entwined stories — narrative tropes that later became standard on television.

Quite the interesting read. I communicated via phone and email with Andy and his wife several times during the release of RAGE OF THE BEHEMOTH, wherein he and Richard K. Lyon penned their final short story. At first he was a crotchety fellow – until he found out I was a one-man publishing house at night and a cop during the day. Then he warmed right up and we got along just fine 🙂

That’s a great story, Jason! Thanks for sharing.

Far as I know, that story in RotB was the last one he published.

That’s a powerfully moving article. I’m not at all surprised that Chris Offutt had material for a whole memoir in the experience of sorting, cataloguing, and processing the implications of his father’s semi-secret career.

Was it Harlan Ellison who said one of the cruelest things you could do to a friend was to name him as your literary executor? There’s enough emotional gunpowder in that kind of relationship of deep trust and — by definition — cessation of reciprocity to drive any number of stories.

Very true, Sarah! A fine argument to pare down your stuff long before your children have to deal with it.

My wife has threatened to throw out all my paperbacks when I die. At least I won the fight about throwing them out while I’m alive…

Wow, I always thought Andrew Offutt’s fantasy books were a little fetishy. Now I know why. Like Lin Carter, his writing wasn’t that great, but as an editor he was tops. Swords against darkness is still one of my favorite series of books.

I hope he releases his Dad’s “Spaceways” and other works on Kindle. I’m one that would eagerly buy/re-buy the whole set.

I have maybe a third and was a bit guilty that all the ‘used’ stuff I liked not a dime went to the authors directly. For all the stuff about “Piracy” really did any author see a dime of a book sold for $3?

If his son (vs some big publishing corporation) types the stuff into a computer and puts it on Kindle – and go sub-dead tree price – he’d probably earn far more than his dad was paid for his works.

Just please show respect – type/proofread in – get the original images – and sub-dead tree price $3 – $5 tops… There’s easily 10-20K people who’d buy it up in a second, perhaps remembering being a bratty kid who didn’t dare grab it off the rotisserie or seeing it later out of their reach for years on the collector’s market. Even at a sub-dead tree price the high percentage to a content creator digital media gives would pay far more than begging a modern publisher to republish it…

I know it’ll never happen — rights issues would be insanely complicated — but I’d love eBook rereleases of Swords Against Darkness. And Flashing Swords, as long as I’m dreaming.

Interesting… have to admit, the Crusader series sounds like something my teenage hormones swirling with Dungeons & Dragons would have come up with. Therefore, yep, I’d pay $5.00 for some kindle copies of it…