We first introduced you to Dirk Manning way back in 2011, courtesy of his nationwide tour promoting Nightmare World, his horror comic series.

As someone who spent a significant amount of my childhood reading contraband horror stories by flashlight under the covers, Manning’s work struck a chord with his vintage-look illustrations and old-school storylines.

So it’s no surprise that his work holds a place of honor on the bookshelves in the underground offices of Goth Chick News.  Nor is it probably a shocker that due to his genre of choice (not to mention the black top hat), that he’s become a personal favorite as well.

When I learned about Manning’s latest installment of his paranormal Mr. Rhee series, I had to ask him to spill some double-secret details just for you.  And being my favorite goth guy, horror-comic crush, he graciously complied.

Let’s wade in shall we?

GC: For those who don’t know, can you tell us a bit about the infamous Mr. Rhee (say his name slowly dear readers – get it?)

DM:  Mr. Rhee is a paranormal troubleshooter who lives in a world where the Armageddon and the Rapture has happened and society, now completely rebuilt, wants to believe that everything has gone back to normal. Mr. Rhee knows there still demons and monsters lurking in the shadows, though, which automatically sets him up as a man against society… even though he’s the type of man society needs. 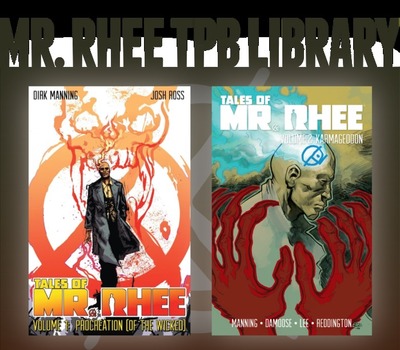 We first met Mr. Rhee in 2006 as an online comic which evolved into a labor of love / horror with the first printed issue in March of last year.  Do I dare say, I smell a new horror comic franchise…?

Without question. I’ve made no secret of the fact that, were I only allowed to write one comic for the rest of my life, it would be Tales of Mr. Rhee.

For those of us who know you best from your Nightmare World series, do these stories and Mr. Rhee’s tale intersect?

They do. My own rule regarding all my creator-owned work is that each story, when collected, will be accessible to any new reader… and that’s true of both volumes of Tales of Mr. Rhee to date. That being said, Nightmare World readers will surely see some pretty direct connections between the two series, from characters to storyline subplots and more, even though not being aware of these connections will not diminish the story at all. It will enhance it a bit for people who are aware of them, though.

Okay we’re dying to know – what sort of… well… research is involved in writing a supernatural storyline?

Nightmare World was my autobiography with monsters sprinkled in to make it more believable. Tales of Mr. Rhee is my soul on paper. Read into that what you will. 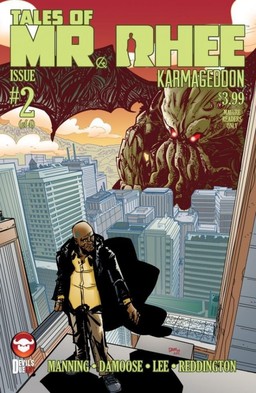 Have you ever had a supernatural experience personally?

I did… and in New Orleans, no less! I would love to tell the full story here, but instead I’ll encourage people to read the comic book adaption of the story, titled “I Ain’t Superstitious,” in the upcoming horror comic anthology Then it Was Dark. It’s a helluva story…

Tell us about your current Kickstarter campaign.  Is it true you hit your goal in 8 hours?

As we did for the first Tales of Mr. Rhee book, for Tales of Mr. Rhee Volume 2: Karmageddon we launched a Kickstarter in which we are offering readers chance to get a Limited Edition Hardcover Collection as well as some other cool goals, including a limited edition glow-in-the-dark Tales of Mr. Rhee T-shirt. My publisher (Devil’s Due Entertainment) and I set a goal of $6,666 for this campaign to be successful, and we hit the goal in under 8 hours.

As I type this, two days into the campaign, we’re now just shy of $8,000 in pledges. We have hit our first stretch goal, and I’m RHEE-ly hoping we can get to that magical 13K level so we can send people a whole box of great stuff along with their books! [laughs]

In the first Mr. Rhee installment (“Procreation of the Wicked”) you worked with some pretty amazing illustrators.  Is it the same crew this time around?

That’s the best way I can describe the way they’ve brought this story to life. The art and the colors are so very, very expressive… especially in regards to the colors. I’ve never written a script in which I considered the colors and color schemes as much as I did working with Anthony. 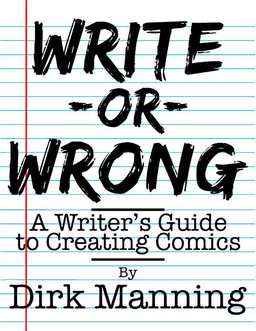 He’s a very complex guy. He’s noble, but he’s flawed… and he makes mistakes. Some might argue he makes a lot of mistakes… but his heart is in the right place. He’s also a very tragic character. He’s very much a man against society, a real loner, and he knows it… and because he knows it, he’s not afraid to make very potentially unpopular decisions. That’s something we’re going to see play out more and more as the Tales of Mr. Rhee franchise goes on.

In 2012 you also put out a writer’s guide to creating comics called Write or Wrong (the only book I’ve ever seen on Amazon with a 100% five-star review).  Do you have any plans to follow this success up with another book along this same topic?

The second book, I think, is going to deal largely with what creators should be doing – or what they should expect – as they start making comics in regards to publishing their books, doing conventions, and the like. I’m VERY excited about getting into it, but I know I’m going to need to set aside some serious time to just start pounding out chapters. [laughs] 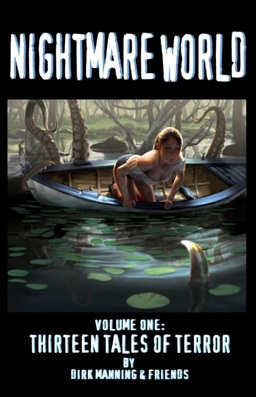 The last time we caught up with you, there were hints of something pretty huge – possibly involving a screen of some size or other.  Any updates you can provide?

Stay tuned… and please, if you like Tales of Mr. Rhee and Nightmare World, tell everyone. Believe me, every voice in the choir helps. Oh… and I’d recommend checking out and backing the new Kickstarter for Tales of Mr. Rhee: Karmageddon, as well. Here’s a link to make it nice and easy to do so: http://bit.ly/Rhee2-Kickstarter

By the way, as of this post, Manning informed me he was about to achieve his second Kickstarter stretch goal, which is impressive in general, but a real commentary on the popularity (or rediscovery) of horror comics.

Free signed/sketched bookplates for everyone!

Have a comment or question for Mr. Rhee himself?  Post it here or drop a line to sue@blackgate.com and I’ll be happy to deliver it in person.

Two bucks for the kindle edition, that is well priced. I’ll give it a whirl GC. You need to tell John about this. He has me hooked on the Courtney Crumrin series but they are at 10 bucks a book. This looks like a well done Dr.Strange.

Dearest Ape,
Mr. Manning just broke his third “stretch goal” for Kickstarter funding in nine days. As well connected as you are – did you have anything to do with that by chance?

I will certainly make John aware via email. He has not ventured into the basement since…well, that last “incident.”

Cheers for your always welcome support.