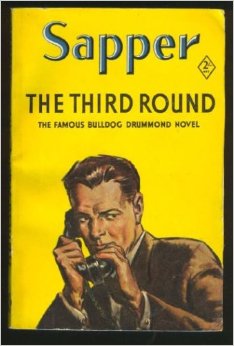 Sapper’s The Third Round (1926) marked a return to the more humorous tone of the first book in the series. Not only the humor, but the premise of that initial book is invoked with the decision to again build the plot around a spunky female whose doddering old father has fallen prey to heinous villains. All trace of The Black Gang (1924) and its doom-laden paranoia over England likewise falling prey to a communist revolution has been removed. In its place we have Hugh Drummond once again eager to escape the boredom of everyday life and engaging in comical banter with friends and foes alike.

The starting point for the adventure this time is the impending nuptials of Algy Longworth, Hugh’s old friend who has finally been reduced to the silly ass familiar from the stage play and film adaptations. The catalyst for Algy’s descent into idiocy is his having fallen head over heels in love to the extent that he now horrifies his friends by reciting poetry. So serious is his obsession with the girl of his dreams that he has become a literal walking disaster shunned by all who know him. 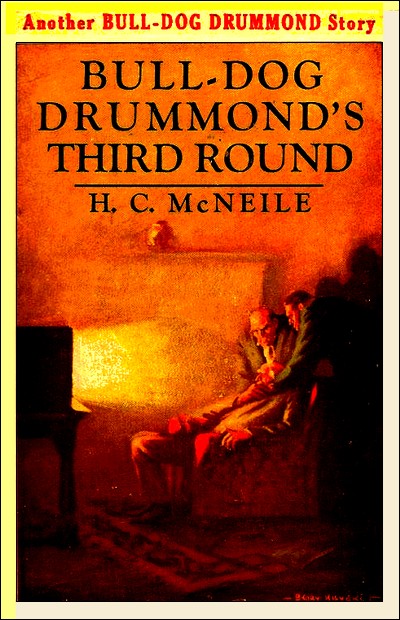 Algy’s future father-in-law, Professor Goodman, has realized an alchemist’s dream of manufacturing diamonds at almost no cost. His intent to take this amazing discovery public brings him to the attention of the diamond syndicate who promptly hire Carl Peterson to remove this living, breathing threat to their livelihood. The novel opens with the syndicate’s interview with Peterson, just as the first book opened with Peterson bringing together the international team to financiers to bankroll his scheme to destroy the British economy. Once again, Sapper deliberately echoes the introduction of Dr. Nikola in A Bid for Fortune (1895), the first of Guy Boothby’s series in his treatment of the introductory meeting with the chief villain. Sapper’s decision to move Peterson forward from the background to become the central threat for the first time is its greatest strength, for his narrative finally has a focal point equal to Drummond’s often overpowering personality.

What follows is a series of abductions, confrontations, escapes, and coincidences (some stretched to the point of ridiculous, but never less than amusing). It all builds giddily to a climax that threatens to outdo Sir Arthur Conan Doyle’s “The Final Problem,” where Sherlock Holmes and Professor Moriarty (on whom Carl Peterson was closely modeled) struggled to the death over the Reichenbach Falls. The difference in this case is that Sapper can’t resist setting up a near perfect imitation and then taking the piss out of it.

There are many fine humorous moments, several uttered this time by Peterson himself, including a delicious one concerning the never quite stated fact that he and his supposed daughter, Irma, are actually lovers. Peterson’s final jest, reserved for the last chapter, is a perfect skewering of the Great Game being waged by the two opponents in true Holmes and Moriarty fashion. This was Sapper’s third Bulldog Drummond novel in six years and the title itself makes it obvious it would not be the last of his encounters with his arch enemy. Their final skirmish, at least as far as Sapper was concerned, would concern the fourth book in the series. Fans of Hugh Drummond, the perennial overgrown schoolboy, shared their hero’s anticipation of that fateful meeting.