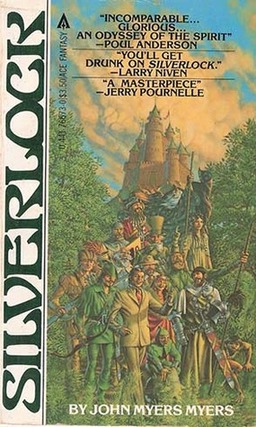 Last week, I was talking about L. Sprague de Camp and Fletcher Pratt’s Compleat Enchanter and it occurred to me that one of the great pleasures of that work is encountering familiar myths, persons, and fictional events in a new guise and from a new perspective. It’s also a bit intimidating, from the point of view of a writer, to realize just how thoroughly de Camp and Pratt had to know their source materials.

It doesn’t take very long to go from these thoughts to the great masterwork of this type, John Myers Myers’s Silverlock. On the surface, the book tells the story of  A. Clarence Shandon – re-christened Silverlock due to a white streak in his hair —  on his journey of self-discovery after being shipwrecked on the shores of the Commonwealth.

It doesn’t take long, in fact he’s still in the water,  for the well-read person to begin to find a certain quality of familiarity in the narrative, to figure out that Shandon has made landfall in the Commonwealth of Letters. From the very first, every  person he meets, every place he goes, everything that happens to him, alludes to some piece of literature. Every single person, place, or thing. What adds to the pleasure is that Shandon himself has no idea of what’s happened to him. His degree is in business administration.

Now this might strike you as a bit overwhelming, or even a bit tedious, but it isn’t. Shandon himself, without being aware of it,  provides the key to enjoying the book:

At times the mind works on two levels at once, and it was so with mine on this occasion. Half of it was giving itself gleefully to the moment, while the other half was revolving a new idea. What had impressed me was that this friar was well-informed and had a lot of fun out of that fact alone…  I glimpsed the concept that to know a thing for itself could be a source of joy. Take the song we were bellowing. It was easy to appreciate, but I would have had more chuckles out of if I had known, as the others did, about the personages involved. 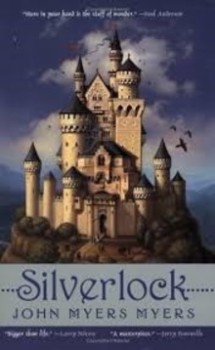 The readers’ minds work on two levels as well. The first is the level of the narrative, the action, the plot. The second is a kind of game, in which they see how many of the allusions they recognize.

And it’s allusions that make the whole thing work. Allusions are often defined as “indirect references” because the source material is never cited; you either recognize it or you don’t. But they actually function in a different way from regular references. Shandon finds the song they’re singing “easy to appreciate,” even though he doesn’t understand any of the allusions in it. That’s because allusions have to work in the narrative, as part of the narrative, whether the reader recognizes their source or not.

That they also work on a further, more informed, level adds richness and depth to the narrative for those who recognize them. For example, saying that something is ” like the Trojan War” is a reference, while Vonnegut setting the events of Cat’s Cradle in Ilium, New Jersey is an allusion. If you know that Ilium is a synonym for Troy, then you see something in the narrative you otherwise miss. You also participate in the narrative in a way that doesn’t happen with the ordinary reference.

Take this one, from Silverlock:

Although I felt like retreating when he turned to approach me, I stood my ground. A second later I was staring back at him as he peered at me with the eye which didn’t have a patch on it. The shadow thrown by the brim of the slouch hat made his other features indeterminate. A long cape blurred the lines of his figure too, but he was a tall fellow with good shoulders. Upon each of them sat a huge crow.”You’re not the fellow I want,” he announced at length.

This episode is strange and eerie as it stands, but there’s more to it when you know the person featured is Odin.

Silverlock first appeared in 1949 and if there’s any drawback to it, it may be that much of the great work that became well known after that date – notably LOTR – doesn’t appear. Difficult to be sure what might go in, however, as part of what makes something a classic is the passage of time. We might need to wait a couple of hundred years to see what from our own time would make it onto that list. 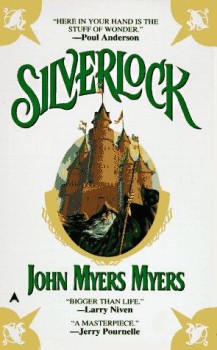 The book is an ode to the idea of steeping oneself in literature of all kinds, and Shandon explains how his experience in the Commonwealth of Letters has changed him:

… all the things I had seen and done since reaching the Commonwealth… returned to fix themselves in my consciousness in order and proportion, a portable spectrum of values, graded for all occasions. To one so equipped, new places would never be too strange, nor would old ones lack the luster of novelty.

A couple of final words. I’m a big fan of allusions – as an scholar of 18th-century literature, it comes with the territory – so Silverlock is right up my street. However, there are plenty of  people who don’t enjoy the book. They find the game too “contrived.” It’s out of print at the moment, but I urge you to find a copy and decide for yourself.

The first Ace (that is, paperback) printing of Silverlock was in 1966. Jim Baen was directly responsible for its appearance, however, a gentleman I talked about a couple of posts ago, Donald A. Wollheim, was senior editor at Ace at the time.

One more thing: every time you see a character of mine with a streak of white hair, it’s an allusion to Silverlock… or maybe to Yvonne Decarlo in The Munsters.

One of my favorite novels. Ever. The allusions that fill this novel make my heart go “squee!”

It’s a real pity that it’s out of print. I have to say that I probably only get about 1/3 of them for sure, maybe as much as 1/2 if I’m allowed to guess.

A sidelight: I acquired a copy of Silverlock published by Ace in 1966. By that time Ace had agreed to pay J. R. R. Tolkien (but not his publishers) royalties for their paperback release of The Lord of the Rings and not to reprint them after their stocks of LOTR ran out. On the last page of the Silverlock text block there’s a full-page ad for their LOTR set — in which they state that theirs is the only edition that pays “full royalties” directly to the author. I think their blurb is probably a response to the statement from Tolkien himself, which appeared on many printings of Ballantine’s editions, that the Ballantine edition alone had been published with Tolkien’s consent and cooperation. Ace rather impudently tried to make their edition sound more Professor-friendly than Ballantine’s!

I love this book, I picked it up years ago and reread it every couple of years or so.

Great book! NESFA did an edition back in 2004 or so that included the Silverlock Companion (which tried to identify all of the allusions). It looks like Myers’ books are currently available for Kindle as well.

Interesting sounding book. I’m currently reading E. R. Eddison’s Zimiamvian trilogy. Though the setting is in a mythical realm (and even supposedly on another planet than earth), the characters constantly quote, and sometimes long quotes, from Homer, Marlowe, Shakespeare, etc. Fortunately there are references in the back citing sources.

I love the cover of the first Silverlock book presented above.

I have mixed feeling about it. I went in with very high expectation because of ecstatic recommendations of Poul Anderson etc, and then found myself somewhat underwhelmed. For most of the way, it was ok, but I did feel that not that much was actually being done in the story, except making the allusions; as its own story, the whole thing felt a bit thin. Well, not the whole thing – the final section picked up a lot and the book ended very strongly, which is a plus. I think of it as a worthwile read, but a bit more borderline than I’d hoped.

I unabashedly adore this book. Following one of my re-reads I engaged in about a year-long quest to read all the sources that had previously passed below my radar. That was a good year, I laughed my way through a lot of picaresques. I’ve since loaned out my copy (along – James – with my copy of Eddison’s “Worm Ouroboros”, though I’ve still got my omnibus edition of the “Zimiavian” trilogy) and I’m itching for its return. It may be time to bite the bullet and buy a new copy.

It’s not that it’s contrived, it’s that it’s thin. Few characters evoke the original book, they have a few clues that let you guess, sometimes, like a crossword word, who is meant.

Also, I don’t believe the character’s arc at all.