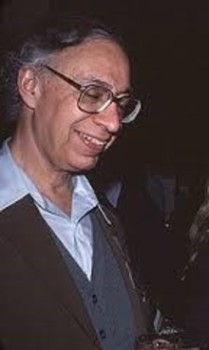 As a publisher and editor, Donald A. Wollheim (1914-1990) is arguably the most important single figure in the 20th-century SF and Fantasy community. SF in paperback? SF anthologies? He started them – including The Pocket Book of Science Fiction, the first book with the words “science fiction” in the title.

Aside: for those who don’t already know, what we now call a “paperback,” used to be called a “pocket book.”

As the editor at Avon (1947-1951), he was responsible for introducing the likes of Lovecraft and Lewis to the mass market. At Ace Books (1952-1971), he created the now legendary Ace Doubles, reintroduced then out-of-print writers such as Edgar Rice Burroughs, and bought the paperback rights to Dune.

He was also responsible for bringing Lord of the Rings to paperback, and thus launching, however controversially, the modern Fantasy publishing world. It’s not my intention to discuss the controversy right now, but you can get a good look at both sides of it here and here.

Considering all this, it’s not surprising that Wollheim isn’t well known as an author – and a fairly prolific one if you remember that he also wrote under seven pseudonyms. So today I’d like to introduce you to The Secret of the Ninth Planet. 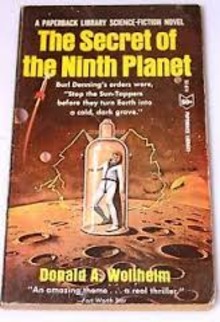 The hero of the story is Burl Denning, a teenager who, while on an archeological expedition with his father, is exposed to alien technology – a kind of electrical “charge” – which enables him to manipulate the machinery himself. Which turns out to be a good thing, as it’s been discovered that these aliens are tapping the power of the sun, and that if this isn’t stopped, the earth will freeze.

Even though it’s only been happening for a week, noticeable climate change has already taken place. Destroying the alien’s machinery on Earth has helped, but the drain continues, and scientists have determined that sun-tapping stations must also exist on the other planets of the solar system. An expedition to find and destroy these stations is in the process of preparation, and because of Burl’s unique abilities, he’s invited to go along.

Burl and his comrades manage to destroy the stations on almost all the other planets, and finally head to Pluto, which they think is the headquarters of the aliens. They’re right, but they’re also wrong, and it takes a trip to Neptune’s moon Triton to save the day.

Okay, maybe I should have said “spoiler alert” but I don’t think any of you really thought the day wasn’t going to be saved, and besides, I didn’t tell you how.

Written in 1959, Ninth Planet is definitely YA, or what would have been called a “juvenile.” For those of us who came afterward, the “on an expedition with his father” gives the opening a kind of Jonny Quest flavour, and Burl reminds us to some extent of the hero of Heinlein’s 1958 YA, Have Space Suit–Will Travel. Typical of YA at the time, the book is chock full of scientific detail  and all of it absolutely accurate – again, for its time.

By modern standards, the book moves towards its complicated climax quite slowly, but its single greatest drawback is the omniscient narrator – perfectly commonplace and acceptable at the time, but something that just doesn’t sit right for today’s readers. For us, it makes the tone seem emotionally flat, in spite of some genuinely exciting sequences.

For me, the value of books like Ninth Planet lies in how they can show us social and literary change. Modern readers, for example, might be a bit taken aback by the use of an atomic weapon to destroy the sun-tapping station on Mars, given the existence of life, even in the form of a hive-like group of non-sentient beings.

The idea that there’s a single boy whose efforts will save the world is one that is absolutely essential to any successful YA novel, even today. But the sense here of optimism and confidence associated with science and technology is something that’s long been fading from our social landscape, to say nothing of an overall sense of hope for the future. Older readers and fans often remark on the loss to the genre of a “sense of wonder” and I wonder if we’re not talking about the same thing.

By the way, in the interest of full disclosure, I’m very proud to say that I am myself a DAW author

I think of the Winston hardcover edition of this book, discovered in a public library when I was a kid, as one of the great books of my early reading life. The eerie sun-tap effect captured my imagination as I began the book, almost 50 years ago.

Having read similar books in just about that same time, I know just how you feel. It feels dated now, but it’s easy to see how good it was for its time.

Nice article, Violette, and thank you. Don did indeed write his share of entertaining novels and short stories early in his career and your reminder that he did so will hopefully draw a few more readers to his work. Should you be interested in reading a little more about Don, here’s an interview I did with him in 1975:

A fantastic look into the past, Dave, thanks so much for sharing this interview with us. It’s hard to imagine a time when Le Guin and Lee, etc. would have been found “in the slush pile,” isn’t it? And what an insight into what the publishing world was like back then.

Aw yeah, Tulkinghorn. You linked to what must be one of the greatest desktop backgrounds of all time.
Schomberg also did endpapers for a kid’s science text that are even better. Wonderfully redolent of an era when Science was Cool and a kid could expect, if he studied hard enough, that the Mysteries of the Universe and the Sum of All Knowledge would be his to understand.