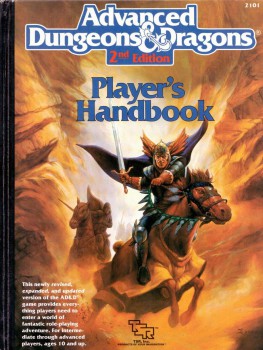 A new edition of Dungeons & Dragons has been released, as Andrew Zimmerman Jones discussed the other day.

This is the third new edition released since Wizards of the Coast took over publication of the world’s first fantasy roleplaying game in 1997. If you’re the sort of roleplayer who spends any time online, visiting forums, blogs, and social media, you’ll know that this latest edition has already generated a lot of discussion, both pro and con, much of it enthusiastic and some of it, quite frankly, deranged. In that respect, it’s not much different than the last several new editions, whose advents were simultaneously hailed as the dawn of a new age of gaming and decried as the twilight of the gods.

I played the new edition a couple of times last year when it was being playtested and found it something I’d be willing to play again if someone else were refereeing it, which is the only standard by which any game (RPG or otherwise) should be judged. That said, I’m not planning on buying a copy for myself, since I’ve already got my own heavily housed-ruled and Holmesified version of Labyrinth Lord and need nothing more. That’s not a knock against WotC’s latest effort – or any roleplaying game – just a statement of fact. I’ve been at this RPG thing for thirty-five years now and, in that time, have pretty well determined what games I like to use at my table. It’s rare that I buy new RPGs anymore, let alone play them, which is why a scan of my shelves would reveal very few games first published after 1984, but then I’m a notoriously unimaginative stick in the mud, so that’s to be expected.

What truly fascinates me about the arrival of a new edition of Dungeons & Dragons is its seeming importance, for good or for ill, among its legions of fans. This is in stark contrast to my own early days in the hobby, when talk of “editions” was well nigh non-existent, never mind a subject of import. Granted, I entered the hobby in late 1979, several months after the release of the Advanced Dungeons & Dragons Dungeon Masters Guide, the third and final volume of Gary Gygax’s magnum opus. AD&D was, in many ways, the first “new edition” in that it was marketed as an “improvement” over its predecessor and, for that reason alone, worthy of purchase and use. I thus never witnessed any of the tumult that no doubt occurred in the lead up to its release. For me and my friends, AD&D was simply a fact of life.

For us, though, Dungeons & Dragons was Dungeons & Dragons; making distinctions between different versions of the game never crossed our minds. My first D&D product was the 1977 Basic Set, which I used interchangeably with the AD&D books I purchased later. Likewise, when a different Basic Set was released in 1980, many of my friends purchased that one and we used it, too, despite the fact that there were some minor rules incompatibilities (like alignments and treating demihumans as classes in themselves rather than races, to cite two obvious examples). And, as my circle of gamers grew wider, I knew some older guys who continued to use the little brown books published in 1974 side by side with the much more lavish AD&D volumes. That’s just how things were in those days.

Roleplaying was still a very new hobby – half a decade old – and referees and players alike were pulling stuff from whatever sources they could. The only “bad” sources were the ones individual referees disallowed because they didn’t “fit” with what he wanted to do in his own campaign. For example, I knew a fellow who didn’t allow halflings as an option, because he felt they were “too Tolkien” for the setting he created. I knew other referees who allowed classes from the pages of Dragon or who adopted ideas from the Arduin Grimoire or modified D&D‘s rather abstract combat system with rules from Arms Law and Claw Law. None of this was deemed unusual, let alone “wrong,” even if some of it wasn’t my particular cup of tea. To my way of thinking, this was how you were supposed to play a roleplaying game, especially one as broad as Dungeons & Dragons, which made use of a variety of mythic, literary, and pop cultural threads to weave its fantastic tapestry.

Most of the other games I played in those days either didn’t get new editions (like Gangbusters) or their new editions made such small changes to their rules that we scarcely noticed (like Traveller or Call of Cthulhu). I suppose the second edition of Gamma World in 1984 represented a “big” change rules-wise by the standards of the day, but, even then, I remember running adventure modules designed for the first edition, like Legion of Gold, for characters generated using the second edition and encountering no problems whatsoever. More importantly, though, referees and players who “stuck” with an earlier edition didn’t war with those who’d adopted the latest offering, at least not in my experience. Each individual, group, and club played what they liked to play and that was that. Choosing one version of a game was simply a matter of what seemed most fun rather than a decision with ideological implications about oneself or the wider “gaming community.”

It’s commonplace now, at least online, to view the transition to Second Edition Advanced Dungeons & Dragons as a flashpoint, a moment in history when everything changed. I know I’ve indulged in that sort of hyperbole from time to time myself. In truth, I’m not at all convinced many of us saw it that way at the time. I knew guys who didn’t adopt Second Edition in 1989, but most of them didn’t because they didn’t want “to buy the same game over again” rather than because of some philosophical conviction. In fact, I remember a number of friends who felt that Second Edition “didn’t go far enough” in making rules changes, since lead designer David “Zeb” Cook considered backward compatibility important. As for myself, most of my complaints about the new edition were “tonal” rather than substantive: I missed the demons and devils and half-orcs and preferred Gygax’s pulp goulash approach to fantasy over the more sanitized, “Ren Faire fantasy” approach of latter day TSR – but I still bought and played Second Edition right up until I abandoned D&D entirely in the mid-90s, because I was having fun playing with my friends.

At the end of the day, “having fun playing with my friends” is all that matters. I have my favorite games and my favorite versions of those games. I even have a few games I actively dislike. What I don’t have is contempt for other people’s definitions of “having fun playing with my friends.” When I was a kid and first introduced to this hobby, I was told that “only stoners play RuneQuest” and, for a long time, I believed it. I eventually discovered that was untrue, but, even when I believed it, I didn’t feel any need to look down on the RQ players or consider myself “better” than they. That some other fellows I didn’t know liked a game I didn’t play was no skin off my nose, never mind an excuse to pat myself on the back for avoiding ludic impurity.

They’re just games. Whatever ones you play, whatever editions you like, if you’re having fun playing them with your friends, you’re doing it right.

>They’re just games. Whatever ones you play, whatever editions you like, if you’re having fun playing them with your friends, you’re doing it right.<

Amen! Some of the best RPG times I ever had was using an unholy Frankenstein Monster of a system devised by stitching together different parts of Old West and Boot Hill (remember those?); it certainly wasn't pretty and would have satisfied no one but those of us who were playing it…but it sure did satisfy us!

I’m with you Maliszewski!

I guess one reason I’ve always seen these edition wars as rather senseless is that my squad of old-school gamers (back in the Reagan-era) never really bothered much with particular rules.

Sure, we followed the rules of those old gaming systems, somewhat. To quote Barbossa from The Pirates of the Caribbean: The Curse of the Black Pearl, in relation to the pirate’s code he said “it’s more like a guideline than actual rules.”

You roll a D20, look at the table and it tells you how many orcs you killed. Everything else is just details.

Personally, I think the edition wars of the last decade or so have more to do with our modern online lives than it does with the quality or lack-of concerning any particular game. In the old days, if you didn’t like a game, you didn’t play it, or you adjusted the rules. Nowadays, everybody has to not only voice their complaint and displeasure when a product doesn’t meet their every single little personal need, but has to do so with increasing levels of vehemence. And it’s not just table top RPGs, obviously.

My Internet memory only goes back 27ish years, but there’s nothing new about the edition wars, just the number of people involved in the discussions. And before AD&Dv2, it was system wars, not edition wars. Pretty much the same arguments though.

I think you may be right. I remember an interview from Gygax where he said that the old-old-school war gamers were really suspicious of the (at the time) new D&D thing that was coming up. Everything new is old!

[…] the Black Gate website, where you can see him post about such things as the most recent edition of Dungeons & Dragons and older games like Boot Hill, and may be returning in other ways in the future. Tags:blog, […]