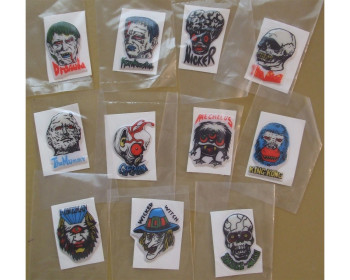 My children are old enough now that, the moment I take them into Kmart or the grocery store, they immediately hone in on the bank of vending machines strategically placed just by the Entrance/Exit.

“Daddy, can I have some quarters?” my daughter asks, exactly duplicating the words I so often pleaded here, in this very spot, thirty-odd years ago. “Pleeeease.” (Strategic parental answer, which I now understand intimately: “If you’re good in the store, you can get one on the way out.”)

Although the look and the operation of the machines have changed but little — dishing out a gewgaw in a clear plastic shell through the metal trapdoor after that final satisfying click of the knob — the “premium prizes” themselves have changed with the times, and they set you back two or three quarters now (300% inflation for flimsy gewgaws and cheap knickknacks!).

Popular for my children these days are grow-animals (made of absorbent rubber that grows up to 600% in water!), rubber ducks whose eyes bug out when you squeeze them, cute little alien creatures (made in China, but clearly inspired by Japan), laser-light rings, and – that perennial fave – temporary tattoos. (Okay, maybe things haven’t changed that much with either the content or the delivery.) But when I went for that little twisting crank of palm-sized bliss, I was usually drawn by the monsters…

I’ll make a public confession: in the three decades between the time I was a kid and the time I had kids, I continued to drop a quarter or two every now and then. Just a little hit, to get that nostalgia buzz. I was nonchalant about it; if anyone ever noticed a thirty-year-old man getting a toy out of a vending machine, I figured they’d just assume I was buying it for a kid (same assumption when I’d buy a Happy Meal for myself). 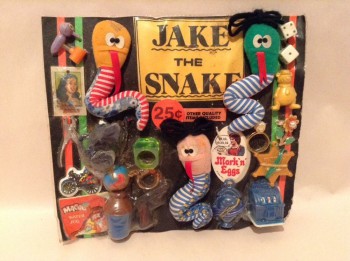 Inevitably, though, there are things I miss when I scan the vending display cards: strange pop flotsam of the ‘70s and early ‘80s that you now can’t find anywhere but on eBay. What I loved most – what my young mind coveted – were the critters and creepy-crawlies, the aliens and monsters. The ones made of that oily rubber are quite in demand with collectors now (they’re known as “jigglers”).

The toy vending machines were like a lottery for young people, because you’d focus in on the cool premium prize prominently displayed behind the glass in the blister pack — the six-inch-long lizard or alligator, the weird monster, the metal cap-gun on a keychain, the rocket ship – but what you’d actually get was a plastic ring.

Thanks to the commerce of the Internet, some of that disappointment can be relieved. It took thirty years, but you can finally get your hands on some of those premium prizes that eluded you!

Which brings me to my recent acquisition of Glow-in-the-Dark Puffy Monster Stickers. I loved these things when I was a kid, and the pleasure they bring now is compounded not only by nostalgia but also by my curiosity as an amateur pop-culture/B-movie historian.

Many iconic monsters are represented (without official licensing from anybody, I’m sure): Dracula, the Mummy, the Wolf-Man, King-Kong. There’s something called “The Nicker,” which is clearly a mutant from the planet Metaluna in This Island Earth (1955 – and wonderfully lampooned in Mystery Science Theater 3000: The Movie in 1996). Wicked Witch, check. Some redundancy with The Skull and Skull-Man, the only noticeable difference being that The Skull has empty sockets and Skull-Man has glowing eyes. Even more fun are the fanciful monsters that were clearly named on the spot: Mechelus, Grabm, and (for the Cyclops) I-Oneman, whose name beams straight from his forehead!

These monster stickers were originally dispensed from gumball machines in the late 1970s/early 1980s for 25 cents apiece. I scored twelve for $9 on eBay. That breaks down to 75 cents a sticker – hey, right in line with that 300% inflation for current vending machine prices. And so much cooler than anything my kids came home with from our last visit to Kmart. I’m sure my kids will get a hold of these sooner or later; they’re always raiding Daddy’s cool stuff. I wonder where they’ll end up sticking ’em?

I was in a more rural part so I didn’t get the big city selection, but still plenty of tempting vending machines…

I remember a sticker one that had this alien like a grey et but big double lobe brain and I wanted, but Dad didn’t want to waste the money and the store that had it closed…

GreenGestalt, your “alien like a grey . . . but big double lobed brain” wasn’t the “Nicker” sticker, was it? (Click on pic at top of post to see larger version)

The little tinge of regret when we recall that something that caught our eye but we didn’t get, or had and lost: that’s the nostalgia that feeds the collecting bug.

[…] Revisiting the Monsters that Lurked in Gumball Vending Machines […]