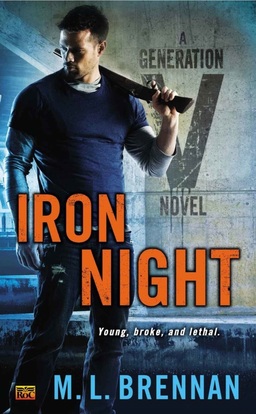 I’m a sucker for a good review. You’d think that, with all the reviews I’ve written, edited, and published, I’d be immune to a little hyperbole by now. But I’m not. When I see a reviewer pull out all the stops for a new book — especially one from a writer I’ve had my eye on for a while — I’m intrigued. I can’t help it. I love this genre and, at the end of the day, we’re all on the lookout for that great read hidden amongst all the same-looking titles on the bookshelves.

It was the ever-trusty SF Signal that pointed me towards my latest discovery, M.L. Brennan’s Generation V series, with Nick Sharps’ review of the second volume, Iron Night:

Someone or something is killing humans in a particularly gruesome way and it just happened to pick the wrong target – the roommate of Fortitude Scott. Fort, now being brought up to speed on the family business, pursues the killer with vengeance in mind, but he might have stumbled onto something far more dangerous than a common murderer…

I haven’t been this excited about a series in a long time. This is urban fantasy at its best, with a strong focus on characters and relationships and an awesome take on established creatures… Brennan’s elves are on par with her vampires. The elves of Iron Night are seriously twisted – more the product of Guillermo del Toro’s worst nightmare than Tolkien’s friendly fair folk… The plot of Iron Night is much stronger than Generation V, complete with really awesome moments (I’m particularly fond of the undercover speed dating)…

Iron Night is freaking awesome. Brennan has made vampires cool again, elves creepy, and urban fantasy feel fresh. In an over saturated genre this is no small feat.