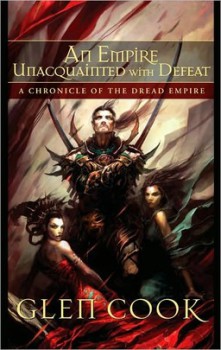 Glen Cook is the author of some of my hands-down favorite books. I hold out his Black Company series as arguably the best military fantasy ever written. The early Garrett books set a standard for the blending of fantasy and hardboiled fiction. But what introduced me to Cook and made me a fan for life was his earlier work, the Dread Empire series, starting with the short story “Filed Teeth.”

The first time I ever saw the name Glen Cook was on the first three Dread Empire books, bound together with a rubber band on the bottom shelf in my local used book store. I didn’t like the cover illustrations (I still don’t) and I thought the whole “Dread Empire” thing seemed a little too dopey.

Then my dad tossed me Orson Scott Card’s Dragons of Darkness anthology. The first story in it, “Filed Teeth,” was set in the aftermath of a great war involving the Dread Empire and it blew me away! I had to have those books I had casually dismissed only a few weeks before.

The next day I took the bus to the book store and bought all three. I devoured them. They’re not as polished as many of his later books, but there are episodes of genius that range from vast fantastic battles to tender moments of pathos. The series introduces us to Cook’s likable trio of rogues, Bragi Ragnarson, Mocker and Haroun bin Yousif. The books begin with the trio scheming to make themselves wealthy beyond compare, and culminates in a war between huge armies and unbelievably powerful sorcery. If you like his other books, I highly recommend them.

Since then I’ve bought most of Cook’s books as soon as they hit the shelves. The six years I had to wait between the sixth and seventh Black Company books were among the worst I’ve encountered as a reader. The news that a new Black Company book is in the wings has me twitching. 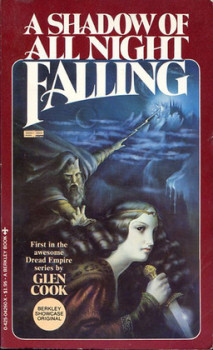 Glen Cook did several things that no other writer I was familiar with at the time was doing. The most noticeable was his preference for very contemporary English instead of what I like to call Olde Timey speech. There are no forsooths or thees and thous in a Glen Cook story.

The next thing that stood out was his willingness to make his characters submit to the needs of the story. There’s an event in the Dread Empire books that Cook discusses in his essay “Shit Happens” from Jason Waltz’ s Writing Fantasy Heroes. Anybody can die at any time and many will.

Finally, there was a harder edge to his books than most of the non-Michael Moorcock fantasy I had read. In the Black Company series the protagonists are pretty much working for a ring-wraith in service to the Dark Lord’s widow. The rebels are as brutal and treacherous as the empire. Cook’s characters weren’t utterly despicable, but they definitely didn’t wear white hats.

Which brings me to this week’s review, Glen Cook’s short story collection An Empire Unacquainted with Defeat (2009). When Night Shade announced they were releasing an anthology of Cook’s Dread Empire short fiction I was excited. Cook is primarily a novelist. Based on “Filed Teeth” I was hoping the book would be a compendium of Dread Empire awesomeness. Alas, I’m here to tell you it’s only a compendium of okayness.

An Empire Unacquainted with Defeat brings several very good standalone stories, a series of linked stories, and some very early proto-Dread Empire stories. While most of the stories are reprints two were never published before. Perhaps the most interesting thing about the book is that its stories show the evolution of the Dread Empire from a “world [that] existed principally to support short fiction involving Leiberesque characters Bragi Ragnarson, Mocker, and Haroun bin Yousif” into something “much larger, more complex and deadlier.”

Let me start with the very good. Both the semi-titular story “Soldier of an Empire Unacquainted with Defeat” and “Filed Teeth” depict powerful and once-important men struggling for direction after the end of the great war that was the focus of the Dread Empire trilogy. They are set in the emptier quarters of Cook’s world, and are steeped in melancholy.

Published originally in The Berkley Showcase: New Writings in Science Fiction and Fantasy, Vol. 2 (1980), “Soldier” is about Tain, an officer of the legions of the Dread Empire, traveling into the West and away from his past in the East. Tain arrives in a small frontier village and the story gets a little Shane-like as he is drawn into the villagers’ struggles against the local lord’s thugs. Though he’s come to believe blood only leads to more blood, Tain’s reluctance to help is overcome by his friendship with the family he first met, and soon enough he is polishing up his imperial armor. This is a great story but it ends slightly unsatisfyingly, with Tain still on the run from his past and the feeling more story should be coming.

I wrote at length about “Filed Teeth” last year on my blog. Each time I reread it I am impressed with how well it holds up and that it still packs a wallop all these years later.

A band of mercenaries has entered the service of a mysterious sorcerer called Lord Hammer whose face is always hidden by a metal mask. He never speaks, instead relaying his orders through his ambiguously female servant, Fetch. Who he is and what the mission he’s hired them for remain mysteries through much of the tale.

This story has everything a fan of S&S could want. There’s plenty of fighting, strange, evil magics, and the dragon to end all dragons. There are also tantalizing hints at the larger world of the Dread Empire and portentous events that leave the reader needing to know what’s going on beyond the story’s thirty-eight pages.

“Severed Heads”, written for Marion Zimmer Bradley’s anthology, Sword and Sorceress, is another very good story. The story is set in the faux-Arabian deserts of Cook’s world. A girl is raped by a sorcerer and later he returns to steal the son born of his violence. She casts off the the restrictions of her sex and learns the skills of a warrior and seeks out her attacker and son. It’s written with Cook’s usual sharp-edged style and proves he can write a woman warrior as well as he writes a male.

Two stories are specifically about his hero, Bragi Ragnarson. “The Nights of Dreadful Silence” is the very first published Dread Empire story. Published in Fantastic in 1973, it is more in the vein of Fritz Leiber’s Lankhmar stories than anything else in the Dread Empire series. Bragi chances across an ancient wizard looking to wreak revenge on the king who cheated him. It’s light and humorous and a little ribald. The second, “Castle of Tears,” originally written in 1969 while Cook was living with Fritz Leiber for a few weeks, is a much darker tale than “Night.” Bragi is hired by a lord to undertake a dangerous task in order to free his daughter from a magical coma. It’s fun to see an established character in his earliest stages of development and the stories are enjoyable, but not nearly as good as anything he would write just a few years later.

Several other stories, what I called the proto-Dread Empire stories, grew, according to Cook’s introductions, out of his love and fascination with the Norse sagas. That interest would lead to the creation of Bragi Ragnarson’s homeland Trolledyngja. The first, “Finding Svale’s Daughter” is about two fathers, one human and one magical, out to rescue their children from the terrible clutches of the Wild Hunt. The second story, “Silverheels” is about an old man, his horse, and his wily kitten, Silverheels, and their journey into the land of the elves. Both are very good pastiches of the Norse legends but again, nothing that reach out and grab the reader like the first three stories. 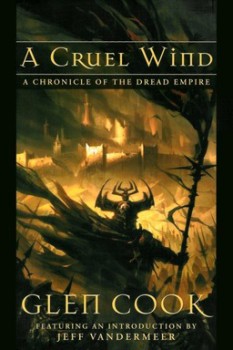 Finally, the book’s weakest stories. They are the trio of tales about about the fiendish crew of the pirate ship Vengeful Dragon. “Ghost Stalk” introduces the vicious freebooters on their hunt for an equally evil Flying Dutchman-like ghost ship. The Dragon’s quest ends in unexpected ways and ultimate, it seems, damnation. I didn’t care for much in the story, from the characters, to their exploits, to the telling of the tale itself, which I found choppy.

Not content to let his pirates go, Cook resurrected them (literally) twice. First in “Call for the Dead” and again in “Hell’s Forge.” Like their predecessor, both of these stories lack depth of character or any substantial worldbuilding. All the characters go by nicknames like Bowman, Kid, or Priest and we know nothing else about them. The reader is told they all hide terrible secrets but only Bowman’s is revealed. Unless you’ve read the Dread Empire books all the cities and nations mentioned amount to no more than a list of names. Cook notes that he proposed a book weaving together these stories and more about the Vengeful Dragon’s crew but no publisher took him up on it. I’ve got to say, after reading these three, I can’t say I’m disappointed that that Glen Cook compilation never saw the light of day.

So is this book worth your time? If you’re a Glen Cook fan, then absolutely. For the very good stories and all the introductions Cook wrote just for this volume it’s a great addendum to the Dread Empire series. Add in the two Bragi Ragnarson stories and the faux Norse tales with the glimpse they give into the evolution of Dread Empire, and it’s a bonanza for fans.  Hey, even the Vengeful Dragon stories add some bits of interest.

However, if you’re not already a fan, you don’t need this one yet. If you want to read “Soldier”, “Filed Teeth”, or “Severed Heads” you’re better off trying to get your hands on the books in which they were first published. Then, if you like them, you can always pick up the core Dread Empire trilogy in the omnibus edition A Cruel Wind with the striking Raymond Swanland cover.

Yeah, a mixed bag, this one. But it’s got some great stories in it. And I’m glad that Night Shade did at least manage to publish the final Dread Empire book before the recent unpleasantness — I’d been waiting 20+ years (since the first time I read An Ill Fate Marshalling, which was several years after its publication) to find out what happened to Bragni et al.

Amen. I haven’t read the last one yet so I’m thinking of rereading the whole series and finally getting to the end.

I’ll be very curious to hear what you think of it if you do reread the series. It wasn’t a perfect conclusion — I don’t think it could have been, given the circumstances — but it did a reasonable job of tying up the major loose ends.

I’m thinking of revisiting several old series in their entirety and seeing how they hold up. If I do it’ll definitely show up here.

I just read “Soldier” and now I am convinced the story was a major inspiration for Andrzej Sapkowskis Witcher series.