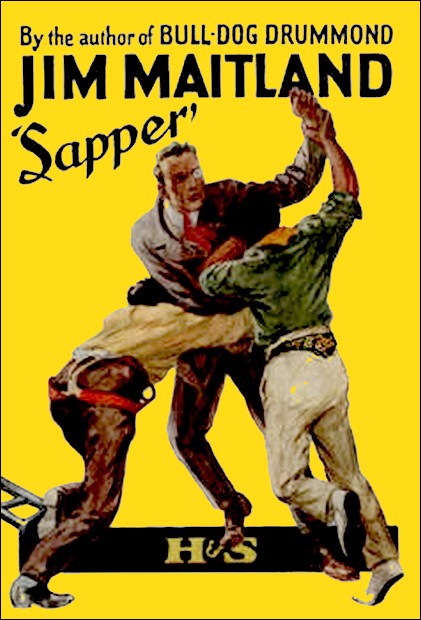 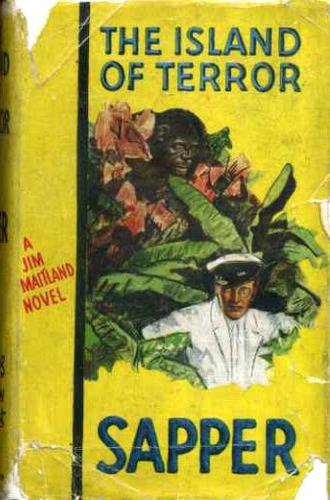 Maitland first appeared in the 1923 collection, Jim Maitland, a fix-up of several short stories that chronicle his adventures before and immediately following the Great War. Modern critics have dismissed Maitland as an overgrown bully. This is a slur against the character that fails to recognize the extremes of nationalistic fervor in the last century. The worst example of this occurs in the tale where Jim overhears a “bloody foreigner” speak out against the British Empire and insists on settling the matter of dishonor with a duel to the death. It is interesting to note that the Old West’s concepts of lawlessness and devaluing of human life were not unique. 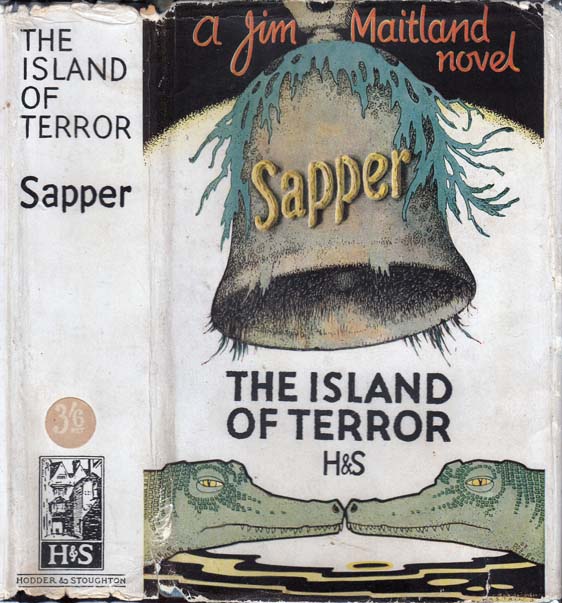 Much like the casual racism that mars several of Sapper’s books for modern readers, such behavior is happily the exception and not the rule in the collection. Maitland is portrayed as a folk hero not unlike Daniel Boone or Paul Bunyan. He is a realistic character whose legend has surpassed reality as he is presented as the one man who can never be licked. A hot-head with a heart of gold, Maitland never once loses the admiration of Leyton, his friend and companion on his world travels who narrates the stories.

Their globe-trotting adventures begin in the South Seas before continuing to Cairo, Monte Carlo, Chile, a rustic mining camp in the Old West, and finally concluding with a true pulp classic involving the bloodthirsty Cult of the Sacred Crocodile along the Nile.

The western yarn and the pulp tale set along the Nile are both two-part adventures. The added word count works to their overall advantage and the pulp tale particularly showcases Maitland at his finest. This makes the reader all the more disappointed by the happy ending where both Maitland and Leyton are married off and their world travels put to an end by domestic bliss. However, “Sapper” insures their last adventure ties satisfyingly back to their first so what we have is really Leyton’s tales of his amazing globetrotting experiences with his larger-than-life friend before both men settle down after finding the loves of their lives. 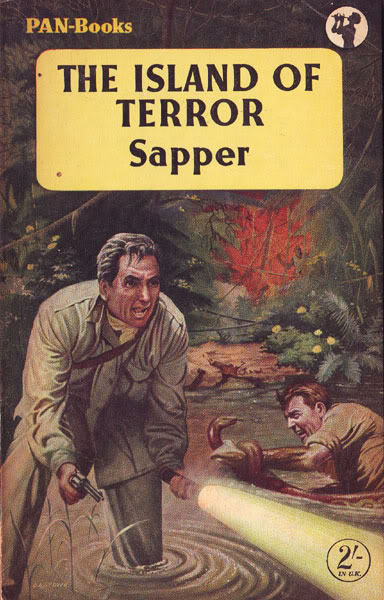 “Sapper” returned to the character for the 1931 novel, Island of Terror. This is the true gem of the pair. The longer narrative works better for the character and the intervening years are acknowledged as Maitland (who is inexplicably single again) is feeling his years as he approaches middle age. He is critical of the younger generation of Brits who did not serve in the Great War as he and his contemporaries did. While Maitland is still one to welcome a fight and the ever-present monocle is still held firmly in his eye, he comes off as more down-to-earth and less romanticized than in the first book.

Maitland is paired with his foppish comic relief cousin, Percy for the adventure this time around which moves quickly from England to South America for a tale of piracy and treasure-hunting aboard the high seas and on a terror-filled island where one keeps expecting Dr. Moreau to turn up.

“Sapper” always wore his influences proudly whether John Buchan in the Bulldog Drummond thrillers; Sir Arthur Conan Doyle in the Ronald Standish mysteries; or H. Rider Haggard, Robert Louis Stevenson, and H. G. Wells in the Jim Maitland adventures. His prose is always fast-paced and well-written and one quickly finds his works enthralling and, at times, charming despite the moments of glaring political incorrectness.

House of Straus is the excellent UK publisher who has licensed both books from McNeile’s literary estate and brought the titles back into print. While scarce to find at bookstores or pulp conventions, they are both available from Amazon at very affordable prices and come highly recommended for those wishing to savor the adventures of a two-fisted True Blue gentleman pulp hero before he fades completely into the smoke of the last century.

Actually, there was more than one Bulldog Drummond movie. I bought one of those MillCreek 100 movie Value Packs some time ago. I don’t know if there are more than what are included here, but they have six of them:

All but one star John Howard, the other stars Ray Milland. They run from 56 to 67 minutes and are in b&w. They run 3 to a side of a 2-sided disc. I like putting one in, laying back on the couch and letting myself doze while watching the formulaic, yet interesting adventures as they run through their paces. Bulldog has a girlfriend, of course, and she gets involved from time to time in his escapades. It’s great fun stuff and I enjoy these action/detective type stories from the 1930s. It’s a great way to time travel to the past in the quiet and solitude and comfort of the couch on a rainy afternoon.