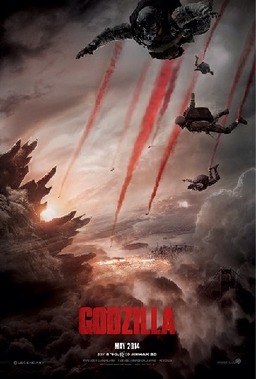 Fifteen years ago a horrific monstrosity was loosed on an unsuspecting public. It was huge and ghastly and made you want to avert your eyes.

And it starred Matthew Broderick.

Yes, I am referring to the 1998 “American” remake of Godzilla, which outraged fans nicknamed  G.I.N.O., an acronym for “Godzilla in Name Only,” to ensure it would never be confused with the original source material.

To be fair, there were two good things about the film. One, even with an estimated budget of $130M it did at least break even in the US, pulling in $136M. Second, TriStar Pictures was able to keep all the velociraptor special effects guys employed (they had recently been laid off following the release of Jurassic Park: Lost World in 1997).

However what happened this week may finally eradicate the revulsion from our collective memories.

As my co-worker Ryan Harvey announced on Tuesday (by jumping up and roaring “out loud with him at the top of my lungs”… while at work), Legendary and Warner Brothers released the trailer for their 2014 Godzilla reboot and it looks pretty epic. Considering how long it took me to actually access it, there is clearly a whole lot of interest in seeing what will happen with the iconic monster this time around.

Of his monumental responsibility, Edwards had this to say:

To me, (Godzilla’s) like a force of nature, like the wrath of God or vengeance for the way we’ve behaved.  If this really happened, it would be like Sept. 11.  I want it to be epic. I want to get the hairs on the back of your neck up.

The theme is man versus nature and Godzilla is certainly the nature side of it. You can’t win that fight. Nature’s always going to win and that’s what the subtext of our movie is about. He’s the punishment we deserve.

Godzilla is in post-production so the lack of any really clear views of the monster in the trailer is intentional at this stage; as is the removal of the conceptual art images from the movie site. Nonetheless, what we do get to see is fairly impressive.

If you didn’t peek at the trailer on Tuesday (or the site was just too busy to access), you missed out. Check it out below.

What do you think?  Heroic remake or epic fail?  Post a comment or drop a line to sue@blackgate.com. You can also be one of Godzilla’s 30K+ fans by liking him on Facebook or keep on top of the latest Godzilla news at the movie site HERE.

I can’t wait. But I guess I have to, so I imagine I’ll probably survive. BUT I WON’T LIKE IT! *shakes fist*

I also can’t wait. And I can only hope that the opening bit of the trailer provides inspiration to the makers of Call of Duty or Battlefield or some such.

Good to see others rejoice!

Technically, the monster in the ’98 Godzilla is known as “Zilla.” It was officially retconned by Toho in the 2004 film Godzilla: Final Wars as a separate monster mistaken for Godzilla. (The joke, according the director, was that the Americans had taken “God” out of “Godzilla.”) Zilla appeared in Sydney, where the real Godzilla trounced it in about 3 seconds flat. It felt good.

Chris, I’ll do my best to keep you entertained until the movie release.

Ryan, ok you’re officially a bigger geek than I am. I surrender.