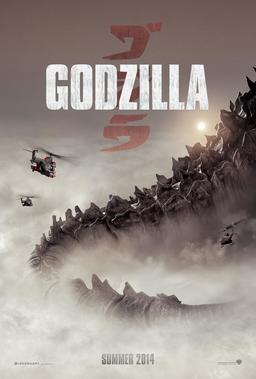 THE TRAILER IS HERE AND YOU SHOULD BE WATCHING IT.

You might not have noticed it, because I’ve only had a few opportunities to discuss it at Black Gate (here and here), but Godzilla is sort of a huge big damn bloody deal to me.

Well, Godzilla is just plain huge to anybody, especially if you are in its way.

That’s why I hovered over my keyboard today at 10 a.m., hands palsied, awaiting the premiere of the first teaser trailer for the new Hollywood Godzilla from director Gareth Edwards. And… when the camera at last found the great lengths of the Japanese leviathan looming through the rubble of its devastation, and the beast let loose the legendary roar… I also roared out loud with him at the top of my lungs.

I was at work, mind you. Some impulses cannot be stopped. We’re a loose workplace, fortunately. They expect weird actions from their writers.

There’s no need to describe the trailer further — you can behold it for yourself — except to say that using György Ligeti’s “Requiem for Soprano, Mezzo-Soprano, 2 Mixed Choirs and Orchestra” for the HALO-drop opening is perfect. This music is best known for its use as the “monolith theme” in 2001: A Space Odyssey, and is anything more monolithic than Godzilla? (As a hardcore Stanley Kubrick fan as well, this slammed my geek-meter up to “Do Not Pull This Lever Again.”)

Although the trailer leaves many open questions, as any early teaser trailer should (will Walter White have to move the cook now that a monster has stomped it?), it does show that Gareth Edwards and company have created a genuine interpretation of the figure of Godzilla.

This is crucial: there are many different Godzilla interpretations since the beast first crashed onto Japanese screens in 1954. Godzilla has served as a nuclear metaphor, a force of nature, a butt-kicking anti-hero, a child friendly superhero, and a near-demonic force. All of these are legitimate interpretations of Godzilla, who can absorb many concepts and channel many human emotions. I prefer some versions to others, but as a dedicated G-fan, I can find some enjoyment in all of them.

What isn’t acceptable: not interpreting Godzilla at all. This was the major failure of the 1998 Roland Emmerich-Dean Devlin disaster. The filmmakers did not care about Godzilla whatsoever—its history, its importance, or even why people liked it. They wanted to create their own monster and do their own thing with a popular brand name attached. The fans and the public rejected their crass endeavor. If you make a film titled Godzilla, you must interact with Godzilla in some way.

And this trailer tells me that’s what the new Godzilla is doing. They are going for a 1954 version (perhaps without the radioactivity metaphor that is less timely than it was for Japan in the ‘50s) that emphasizes the beast’s catastrophic effect on everyday people. This was a key part of the power of Ishiro Honda’s original movie and if Godzilla ’14 can capture even a quarter of that film’s epic, bleak power, it will be a winner.

I couldn’t be more ecstatic. Come get in line for the first screening with me right now.

For the sequel: Godzilla doing flying jump kicks and shaking hands with a giant robot! Like I said, legitimate interpretation.

Ryan Harvey is a veteran blogger for Black Gate and an award-winning science-fiction and fantasy author who knows Godzilla personally. He received the Writers of the Future Award for his short story “An Acolyte of Black Spires,” and his stories “The Sorrowless Thief” and “Stand at Dubun-Geb” appeared in Black Gate online fiction. All these tales take place in his science fantasy world of Ahn-Tarqa. A further Ahn-Tarqa adventure, “Farewell to Tyrn”, the prologue to the upcoming novel Turn Over the Moon, is currently available as an e-book. You can keep up with him at his website, www.RyanHarveyWriter.com, and follow him on Twitter.

My fingers are crossed and I am hoping this works.

“This was the major failure of the 1998 Roland Emmerich-Dean Devlin disaster. The filmmakers did not care about Godzilla whatsoever—its history, its importance, or even why people liked it. They wanted to create their own monster and do their own thing with a popular brand name attached. The fans and the public rejected their crass endeavor. If you make a film titled Godzilla, you must interact with Godzilla in some way.”

Yep. Exactly. I’ve kicked around the idea of deconstructing Hollywood “Godzilla” 1998 to explore why it was such a gigantic failure, but you pretty much summed it up right there.

Just back from watching the trailer. hell yeah. Major geekgasm. I hope this is the movie we were hoping for in 1998. This trailer — those last 30 seconds in particular — convinces me that it just might be. I had to replay that ending, hear that roar again. It brought tears to my eyes.

Hey everyone, I’m announcing here that I am starting a 6-part (I think, might be more) article series on the history of Godzilla starting next week.

Because I have to use this knowledge in some useful way.