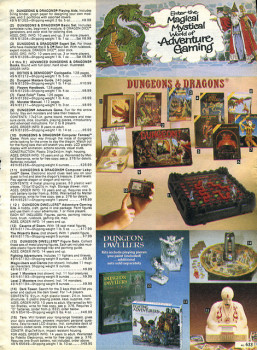 I first read a Dungeons & Dragons rulebook in late 1979, nearly six years after the world’s first roleplaying game had been released. Over the course of those years, a great deal had happened, both to D&D and to the wider hobby it spawned. While I hadn’t personally experienced all that had happened, my friends and I were beneficiaries of it all.

Looking back on the late 1970s from the vantage point of 2013, just days before the release of yet another big budget fantasy film, it’s sometimes hard to remember that fantasy – at least the peculiar kind of fantasy that D&D represents – was once a rather unusual taste. It certainly wasn’t yet the mainstream genre of entertainment it would become over the course of my lifetime, thanks in no small part to the success of Dungeons & Dragons. A few months before I discovered the game, Gary Gygax, in an editorial published in issue #26 (June 1979) of Dragon magazine, noted that, initially, he had assumed D&D would appeal only to a very small segment of the population. He writes:

The target audience to which we thought D&D would appeal was principally the same as that of historical wargames in general and military miniatures in particular. D&D was hurriedly compiled, assuming that readers would be familiar with medieval and ancient history, wargaming, military miniatures, etc. It was aimed at males.

He then goes on to say that, “Within a few months it became apparent to us that our basic assumptions might be a bit off target. In another year it became abundantly clear to us that we were so far off as to be laughable.” His larger point was that, because the game’s popularity had spread beyond college-age and older men with an interest in military history, the game itself would have to change to be more accessible to other potential players.

My 10 year-old self was one of those other potential players. 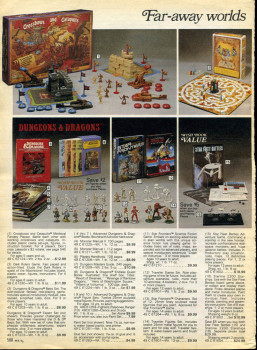 For that reason, TSR Hobbies began publishing a string of “basic sets,” aimed at less experienced and/or younger players who nevertheless had an interest in fantasy roleplaying of the sort that Dungeons & Dragons represented. That was how I was introduced to the hobby and I know very well that I was not alone in this regard, whether that basic set was published in 1977 (as mine was), 1981, or 1983. But as useful as those sets were in spreading the Gospel of Gygax and Arneson to the masses, equally important, I think, was the means by which those sets were sold. Certainly, they started to appear in specialty game and hobby stores, as well as some bookstores, but their appearance in the catalogs of mail order companies like Sears, JC Penney, and Montgomery Ward played a role as well. The basic set I owned was purchased through a Sears catalog, as well the copy of the Monster Manual I bought with money my grandmother had given me for Christmas.

When I was a child, Christmas catalogs, particularly the Sears Wish Book, were much anticipated arrivals on our doorstep every September. My friends and I would scour their pages, seeking out toys and games that caught our fancy, circling them in red or other colored pens so that our parents would know what to order for us when the holidays rolled around. In the early days of my involvement in roleplaying, there weren’t yet a lot of stores that carried RPG materials, even one as well known and popular as Dungeons & Dragons. Consequently, the Wish Book was a window, not just on TSR’s latest offerings, but also those of other companies. If you look at the two scanned images accompanying this article, you’ll see games like Traveller and Starfleet Battles, as well as a selection of miniature figures and fantasy-themed books and boardgames. It truly was a wondrous thing to behold, especially when I was a youngster and wasn’t very knowledgeable about the wider hobby.

Nowadays, fantasy is not merely mainstream, but a huge multi-billion dollar industry. Likewise, the ready availability of the Internet means that no young person need rely on something as quaint as a printed catalog to obtain information about the latest releases for his favorite hobby. But, every year, as Christmas looms closer, I find it hard not to think back to the days when the Sears Wish Book played a huge and happy role in my life.

I also was part of the generation that grew up scouring the Sears Wish Book catalog. However, I was not first introduced to D&D by way of Sears; some friends my same age were the culprits.

Nevertheless, when I told my conservative grandmother what I wanted for Christmas that year (1981), guess where she bought the basic set with the Erol Otus art on the box cover? Since we lived in a small midwest town (i.e. no game, or hobby, or even comic shops) the only way she knew how to get such an item was by Sears catalog.

I later learned that a bicycle/dead-head shop in our small town carried D&D merchandise. It was here that I packed up on all my TSR items and Dragon Magazines over the next few years.

Great post! Thanks for the memory of Sears catalog!

I got lots of my basic D&D through Sears also. They used to have stuff like this on the shelves, even drug stores had D&D modules.

Glad Dark Tower has online and android versions. Missed the electronic maze games, both the tabletop and the LCD one. Those are kind of the grand-father games of what we now call “Roguelike” where you dungeon for the sake of it so there’s this constantly changing dungeon.

IMO it’d be pretty funny to make a B-Grade budget fantasy move and call it “The Dark Tower” but it’s not that Gunslinger one…:-) Epic quest, Deathstalker meets Hawk the Slayer meets Excalibur, and licensed on the Milton-Bradley game! Just happen to have the “Scout” wearing something that from the right angle looks like a Cowboy hat and use film stills traced over to look artsy and iconic and the promo scene is from when they at last circle the kingdoms and prepare for the final battle in the Tower!

Oh, man, the Wish Book … THAT brings back the memories. From 1977 to about 1984, I think that was my most anticipated reading material of the year. From the RPG materials to handheld video games to Atari and Intellivision and action figures, it had everything.

Ditto for me, and the same years that Ty mentioned: 1977 to 1984 (from the age of 5 to the age of 12). And yeah, half the fun was going through with a marker and optimistically circling more toys than Santa could transport if he hitched up a Yule-Haul to the sleigh.

Holy CATS. Yeah, this brings back a lot of memories for me as well… the months leading up to Christmas were spent on the floor of the living room with my brother, looking through the Sears Wish Book and trying to decide what to get. We always planned our Christmas lists together, and I wouldn’t think of putting something on the list until I had run it past Mike.

OF COURSE you circled the really great items. Red pens were a must!

But WHERE did you get those scans? My Sears catalog days were behind me by the time D&D made it in — I never even knew D&D was listed in that famous book! (Let alone any other RPGs). I am amazed to see it.

I felt that old familiar surge of excitement when I saw the pages, though. How I wish D&D HAD been listed when I was growing up! I’m sure it would have revolutionized my pre-teen years (instead, it revolutionized my last year of high school, in 1980).

I had no clue D&D stuff was in the wish book, which I too grew up with. I remember looking at toys and stuff too . . . but when I discovered D&D via my cousin in probably ’81 or so, I think that was behind me.

Many of my wish book memories are the things of nightmares, when my older sister would force me to go through the close page by page, demanding to know which pictures were my favorites. Ugh.

Oh man, I remember those very pages. In fact, I’m pretty sure I had to roll up a magic-user with a hawk, just because of that guy at the top of the page.

[…] for Christmas 1979 – was the Advanced Dungeons & Dragons Monster Manual. I ordered it through the Sears catalog, because, to my 10 year-old mind, that’s what you did when you wanted to buy something […]