“I really don’t know who I am. I don’t know when to stop. So if I see a great, big, threatening button which should never ever ever be pressed, then I just want to do this. <presses button>”   ~Doctor Who, “The Christmas Invasion”

It’s the oldest story in the world.

(Literally, depending on who and what you believe. As a mother of small children, I think there is a reason for that.)

Person A (A god. A parent. A fairy godmother.) tells Person B (A hero. A child. An archangel.), “Everything is great. And everything will be great. As long as you don’t (Eat the apple. Open the box. Push the big shiny red button.).”

The minute the prohibition is given, we know what’s going to happen. What has to happen. Because it’s the nature of story and because it’s human nature.

And because, of course, if no one pushes the big threatening button, there’s no story, is there.

So when Odysseus and his men stop on Thrinacia, and they’ve been warned by both Circe AND Tiresias to never, ever, under any circumstances whatsoever, so much as LOOK at the cattle that live there, because they belong to Helios, the god of the sun… 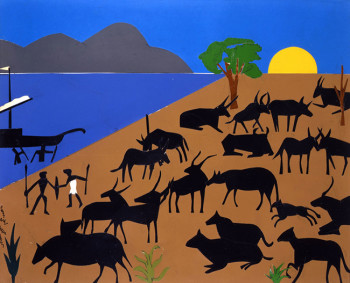 Well. The next part is inevitable, isn’t it? Odysseus goes to pray to Zeus for a safe return home. When he leaves, he tells his men what Circe has told him. And do they listen?

Well, of course not.

Odysseus returns from his prayers to find his men eating steak. Beef barbecue over here, giant steer roasting on a spit over there, and he asks himself what we are screaming at the page:

“Why did I leave these idiots alone?”

Punishment is swift and absolute. When they board the boat again, it is blown into Charybdis and everyone dies except for Odysseus. He washes up on Calypso’s island where, as we learned, he will spend the next many years crying on the beach all day and sleeping with her at night.

As far as tropes go, I find this be one of my two least favorite. It’s irritating, to me at least, to set people up to be stupid and then have them follow through. (My other least favorite is where the entire plot could have been resolved by one stinking conversation on page 5.) I don’t seem to be alone, either: most of the time, if you see this trope today it will be subverted or played to humorous effect. But irritating or no, it deserves respect on account of its age, if nothing else. 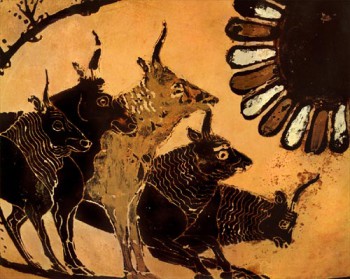 Next time: we wrap up talking about Odysseus with a discussion of the single most important relationship in the hero’s life. And no, not his wife. Or his dog, because I can’t even think about that story without sobbing. After that? You tell me. What do you want to read about?