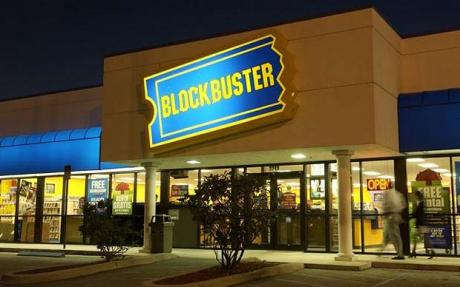 The Chicago Tribune is reporting today that Blockbuster will close all of its remaining brick-and-mortar outlets.

And so we bid a fond goodbye to an earlier, simpler way of life. When Friday nights meant leaving work a few minutes early to get in line at the rental store, before all the new releases were gone and you were stuck with an Andrew Dice Clay picture.

This is just one more thing that will confuse the hell out of me when I’m old and senile and wander away from the home. I’ll be standing in the parking lot of Best Buy with five bucks in my hand, trying to rent the first season of Kolchak the Night Stalker. Just you wait.

End of an era, for sure. The last remnants of the Old Republic have been swept away. (But how will Google maintain control without the bureaucracy?)

Blockbuster filed for bankruptcy in September 2010. It was purchased by DISH Network Corp. in a bankruptcy auction for $320 million in 2011, back when they were trying to seriously compete with Netflix. The company says it will close all of its 300 remaining U.S. stores by early January and shut down the Blockbuster By Mail service in mid-December.

DISH Network Corp. did note about 50 U.S. stores run by independent franchises will remain open, but since DISH is closing its distribution centers, it’s unclear how they will continue to operate. DISH will keep the Blockbuster brand alive through their streaming and on-demand services.

I remember when Blockbuster arrived here in St. Charles, and gradually put all the independent video stores out of business — just as the arrival of Borders killed all the small bookstores that were plentiful when I moved here in 1997. Borders began liquidation in 2011, leaving my town with virtually no bookstores.

Progress. Science fiction never told me the future would have no bookstores.

Today’s announcement will doubtless mean a lot more to those who remember long weekend lines for New Releases at Blockbuster (by which I mean, those of you over 30). Alice and I used to rent old movies and watch them late into the night in the early 90s, cuddled together on the blue couch in my first apartment. Now I’m going to have to ask my kids to explain how they download films onto their tablets.

But as long as I can get Kolchak the Night Stalker episodes, I suppose I’ll be content.

Personally I think I’ve made the transition from Blockbuster lines to downloading movies on my computer fairly seamlessly (I don’t see the point in Redbox).

However, for some reason, I still haven’t made the technological transition from books to ebooks.

Anyways, end of an era.

Hey! I figured out ebooks. Does that mean I’m not totally obsolete (yet)?

Oddly enough (or maybe not), I rarely made use of Blockbuster over the decades. I’ve maybe been in a Blockbuster three times, so I don’t have much of a personal nostalgic feel for the stores or the company. I always managed to live closer to a small, independent rental establishment, so I made use of them. Still, always kind of sad to see a company fold that’s been such a part of the social landscape for so long.

Simpler? You had to go to the store (with your membership card), hope you could find a video, rent it, watch it during your rental period, rewind (pre-DVD) and bring the darn thing back.

What I do miss about Blockbuster and other video rental stores is talking movies with the staff. I discovered I dunno how many fantastic movies thanks to some dude at Blockbuster or an independent.

> I’ve maybe been in a Blockbuster three times, so I don’t have much of a personal nostalgic feel for the stores
> or the company. I always managed to live closer to a small, independent rental establishment…

I suppose my nostalgia pangs are a result of watching the last video rental store pack it in, not especially Blockbuster in particular.

Did those independent establishments survive? I assume they haven’t.

> Simpler? You had to go to the store (with your membership card), hope you could find a video, rent it,
> watch it during your rental period, rewind (pre-DVD) and bring the darn thing back.

Ha! You’re right, I don’t miss most of that.

But I DO miss going to the store. Wandering through racks of hundreds upon hundreds of movies, all vying for my entertainment dollar. Going to the rental store on Friday night was an EVENT, something you looked forward to, planned days in advance (“Hey! This week, I think we should watch the first three Halloween films. Or what about those Hitchcock films we keep promising we’ll watch?”) And of course, you were always distracted when you stumbled on the the last copy of some new release you hadn’t realized was out.

Did anyone else over-rent? End up taking home more movies than you could possibly return in 48 hours? Man, I did that constantly.

Rental stores made it easy to discover movies, make crazy choices, and dash out for a film at five to midnight. For a more than a decade, they were a huge part of American culture, of a universal shared experience.

And now they’re gone, in less than a generation. What was it Alvin Toffler said? The rate of change in our lives is accelerating. He had that right.

Yes, John, couldn’t agree more with the above. The hustle and bustle of a new release Friday when I was really looking forward to the movie, I’d even buy a box of candy to go with it…good times.

Since I’ve worked “odd hours” (in Bill Paxton’s memorable phrase from the cult classic NEAR DARK) pretty much all my life, I also miss whiling away an hour on a Monday or Tuesday morning right when they open, just me and the poor sucker with the open shift returning the videos from the overnight bin. As you said, me and all those movies.

Sometimes I’d strike up a conversation with a fellow movie buff, or a bored mom looking for something decent to kill a couple hours while the kids were at school, but that’s a memory for a different forum. Anyway, I think I tried a lot of movies I wouldn’t otherwise have seen. The internet’s remorseless preference-setting wraps us up like an heirloom in a cocoon of our own tastes if we’re not careful and actively seek out new stuff.

Now that you mention it, I never did watch an Andrew Dice Clay movie. I did see Amazon Women on the Moon, in which he has a bit part, but I don’t regret those 90 minutes.

>Did those independent establishments survive? I assume they haven’t.

I miss the Mom and Pop shops but not Blockbuster.
I had no issue with their practice of not carrying major motion pictures that had content that they found unacceptable.
I did take issue with them insisting that smaller, indie studios cut their films if they were to be stocked on Blockbuster shelves.
If you rented a lower budget movie, especially a genre film with any level of sex, nudity, violence, blasphemy or “adult situations” then there was a good chance the version you saw was edited to conform to Blockbuster’s standards.
No nostalgia for that.

Blockbuster devoured and vomited out the “Mom and Pop” stores. It also made everything bland and corporate. For a while they carried “B” movies and indie films under their “Wild —” genre, but gradually it was only the mainstream movies and the token “Indie” movies just licensed and high budget foreign movies.

Here’s another thing they did, killed almost completely the “Direct to Video” movie market. The people making movies that were trying to bypass the major motion picture distribution markets. Oh, yeah, Disney might puke out “Atlantis 2” etc. that it isn’t going to waste $ paying to get into theaters, that’s OK. But no more “Worriors of Torrg” (1) filmed on a budget of $100K but with decent film student working and some painstakingly created FX… No way no matter how good a story they could tell would they ever be in any awards, just only sold to people who knew what they were ordering and special ordered it.

I felt bad the demise of Borders, and its interesting Hastings seems to be trying to do what killed them… (kill the periodicals section down to an armpit, fill the store with F*cking TOYS for little kidz and religious ‘christian’ stuff excreted from China) But Blockbuster was a huge, cruel Crocodile that starved out when its environment got cold, but it only existed to eat more and grow more, it had no mind other than a savage predator.

For any improvement in our media we have to work to break these film, music and publishing monopolies. There needs to be a new market rule far stricter than any earlier “Code” that forces freedom and openness and fair competition. There needs to be NO publisher making a decision, no distributor blocking save charging the tiniest percentage and NO open blocks or ratings on content, message.

1 – Worriors of Torrgg… Don’t google it, there isn’t one. It’s just my “Thud and Blunder” idea if I ever do a deliberate tribute to the worst stereotypes of Sword and Sorcery.