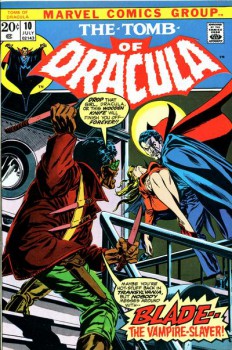 I might be one of the few fans of the Marvel comic Blade to actually admit to liking the screen adaptations staring Wesley Snipes.

New Line Cinema released the trilogy of Blade movies between 1998 and 2004. They were based on the half-breed vampire slayer character created for Marvel Comics by Marv Wolfman and Gene Colan debuting in 1973’s The Tomb of Dracula #10.

Granted, not all three movies were created equal, but I thought the first one was solid and though by the third installment, Blade Trinity, fans of the comic might not have recognized much, the snappy dialog written for Ryan Reynolds and the overall eye-candy made it at least entertaining, if not wildly successful.

In fact, at this year’s C2E2 I overheard an interesting bit of Blade Trinity trivia which maybe helps explain why.

Actor and comedian Patton Oswalt — who played weapons expert Hedges in the third Blade movie — was signing autographs.  He told a fan that all those Ryan Reynolds’ sophomoric one-liners followed by Wesley Snipes’ dead pan stares were largely the result of Snipes not speaking to screenwriter / director David Goyer.

Apparently Snipes would only communicate to Goyer via post-it notes and generally refused to cooperate during the production, causing the rest of the cast to take up the uncomfortable slack in an attempt to save the film. Oswalt explained:

We would all just think of things for him (Reynolds) to say and then cut to Wesley’s face not doing anything because that’s all we could get from him (Snipes).  That was an example of a very troubled shoot that we made fun. You have to find a way to make it fun.

Even more so when you consider that the entire franchise might be getting a chance at a Snipes-free redemption.

A while ago, it was confirmed that the intellectual property rights for Daredevil had indeed returned to the hands of Marvel (Disney), due to 20th Century Fox not being able to keep the property in production long enough to retain the rights.

This week, we learned about three additional properties being returned to Marvel. According to an article in the most recent Entertainment Weekly magazine, Ghost Rider, The Punisher, and Blade have all reverted back to their parent company as well.

Though studio President Kevin Feige indicates Marvel is in no rush to put the properties into development, a new report may suggest otherwise.

In its story about Robert Downey Jr.’s contract negotiations, The Hollywood Reporter contends Marvel already has a script for a Blade reboot.

Now, just because there’s a Blade script is still no indication the project will move into production any time soon. Beyond the mere calendar constraints — the studio’s dance card is already filled through 2015, with additional releases penciled in afterward — Marvel’s writing program has frequently served as a concept generator, producing sometimes well-regarded scripts (a Black Widow solo film, for example) that never go forward.

So sometimes a script is just a script.

However, in the case of Blade, David Goyer has said he firmly believes Marvel Studios will reboot the vampire movie series.

Now that Marvel/Disney has recaptured the rights, I’m sure it (Blade) will be [remade]. They made too much money on that character to not reboot him at some point. I mean, look, between merchandise and whatnot, that little character generated almost a billion dollars.

Late-breaking news from the underground Hollywood grapevine indicates actor Idris Elba (Prometheus, Thor) has signed a four-picture commitment with Marvel Studios, but Marvel has not signed Elba on to any particular character. Speculation is rampant that the sword Elba is meant to wield belongs to none other than our beloved Blade.

For his part, Wesley Snipes was released from Federal prison on April 4th of this year, following a three-year term for tax evasion.  Poor box-office returns and erratic behavior aside, Snipes, now 50, is likely utterly absent from any short-list of actors to reprise the role of Blade. However, word is that Sylvester Stallone has tapped Snipes for the Expendables 3 movie set to begin filming this fall.

Good luck with that, both of you.

What do you think of Marvel taking another run at Blade?  Who do you think should be cast?  Post a comment or drop a line to Sue@blackgate.com.

Interesting — I, for one, would welcome our new Idris Elba overlord.

I did enjoy the movies quite a bit — well, the first two, at least (I think Blade 2 is underrated). Trinity had a bit too much “Blade and the Blade Friends” going on for me — they were obviously trying to set up the team for a spin-off or something.

Did you ever see the TV series?