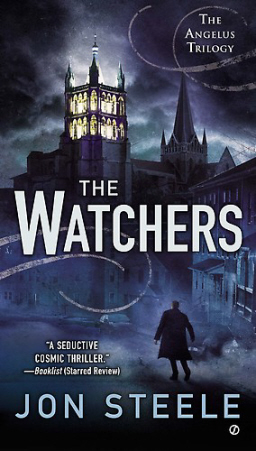 I encountered The Watchers for the first time during my last trip to Barnes & Noble. There I was with an arm full of paperbacks, making my way to the register, when I spotted it on a display in the middle of an aisle.

The cover looked intriguing, in a spooky, gas-lit London sort of way. But was it fantasy? I don’t want to get stuck with another Da Vinci Code clone.

The Booklist quote on the cover called it “A seductive cosmic thriller.” What the heck did that mean? Cosmic, like Elder Gods cosmic? Thanos versus The Avengers cosmic? Or 700-pages-that-feel-like-they’ll-never-end cosmic?

The back cover text wasn’t much help:

Every hour, childlike Marc Rochat circles the Lausanne cathedral as the watchmen have done for centuries. Then one day a beautiful woman draws him out of the shadows — the angel his mother once promised him would come.

But Katherine Taylor is no angel. She’s one of the toughest and most resourceful call girls in Lausanne. Until something unnatural seething beneath a new client’s request sends her fleeing to the sanctuary of an unlikely protector.

Into their refuge comes Jay Harper. The private detective has awakened in Lausanne with no memory of how he got there — and only one thing driving him forward: a series of unsettling murders he feels compelled to solve.

That doesn’t even tell me what era it is. Present day? 1880s? Were there private eyes in 1880s London? Look, is this a fantasy or not? All these books I’m holding are getting heavy.

Fortunately, you can flip through the review quotes on the first few pages while holding a book one-handed. Here’s what I glimpsed:

“An imaginatively metaphysical thriller… [cast] with fey characters and skillfully concealing until the climax whether apparent weird events haven’t been manipulated to make them seem so. This solidly plotted tale… will appeal to readers who like a hint of uncanny in their fiction.”
— Publishers Weekly

Wait, fey characters? Like, fairy fey? Or fay as in “crazy and wild-acting?” You’re not helping, Publishers Weekly.

A quick author check told me nothing. Jon Steele? Never heard of him. And that has to be a pseudonym, right? I know I’m right. Jon Steele. Come on.

Most of the other quotes I scanned were no more specific on the question of whether this was a supernatural mystery, or just an attempt to do The Bourne Ultimatum on the Thames.

“[An] atmospheric, witty, bloody, and swashbuckling tale of age-old struggles for dominion between angels and demons.”
— Booklist (starred review)

“Swashbuckling” — that’s promising. Plus, angels and demons. Could be fantasy. 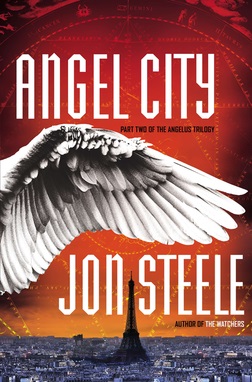 Luxury Reading. Sounds like another blog. Still, we’re back to demons and fallen angels again. I’m definitely getting a fantasy vibe here.

“There’s plenty of diabolical fun to be had here.” — Kirkus Reviews

Back to blogs again. At least this one has SF in the title. And more references to fallen angels. I don’t know if I’m up for a fantasy about angels. I adjusted my pile of books and made one last attempt.

“A wholly original thriller that seamlessly melds suspense, history, fantasy, and mysticism. Steele deftly blends elements of many literary genres into this inventive work of fiction. A tour de force — and the first in a projected trilogy.”
— BookTrib

There you go. First in a projected trilogy? That’s practically the modern definition of fantasy. I added The Watchers to my teetering stack, and made my way to the cash register.

The Watchers was published by Signet on April 2. It is 768 pages in paperback, priced at $9.99. The digital edition is the same price. It is the first volume of The Angelus Trilogy; the second, Angel City, is scheduled to be released June 4.