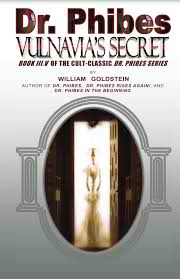 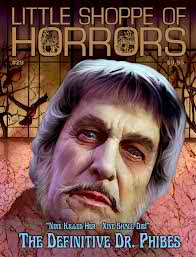 So it was that I greeted the news of Goldstein’s return to the property with mixed feelings. Could he recapture the magic after so long? The unauthorized Phibes comics had tried but failed to capture the tone. The thoughts of anyone making a new Phibes movie seemed doomed to failure. What possible purpose could there be in a new book series so many decades on?
I needn’t have worried. Goldstein’s Dr. Phibes: In the Beginning picked up exactly where the character’s creator had left off forty years before. The book opened with a surprising modern day prologue showcasing Phibes’s mastery of dispatching his enemies with panache before delving back in time (as the second movie tie-in novel had also done) to give us the character’s backstory and fill in the missing pieces.

Goldstein has returned with a fourth title in the series, Dr. Phibes: Vulnavia’s Secret. This title slots in perfectly between the first two titles in the series. It should be noted these are best enjoyed by those who have read the books and are not just familiar with the movies for subtle differences from script to screen or discarded ideas retained in the tie-in novelizations are kept intact in these new titles to offer a consistent alternate take for the literary Phibes. That said, Goldstein explains the re-casting of the role of Vulnavia from the first film to the second in a manner that many fanatical devotees had doubtless already determined was the logical conclusion to draw.

The book opens with Phibes’s dramatic rescue of Vulnavia from St. Daffodil’s asylum for the mentally ill before explaining how Phibes grew new skin cells for Vulnavia’s neck and face to replace her original features that were ruined by the acid shower at the conclusion of the original. As in the second novel (but not the second film), Scotland Yard detective Trout has fallen into alcoholism following his failure to bring Phibes to justice. 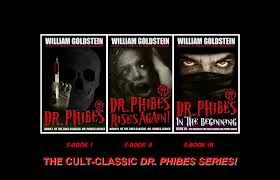 The third book introduced us to another female automaton to rival Vulnavia in Sophie, the vocalist with the Clockwork Wizards. We get much more of the character here including the tantalizing revelation that she and the rest of the Wizards had once been living, breathing people before becoming players in Phibes’s nightmarish world of his own creation. Phibes’s bloodthirsty pet eagle makes a welcome return and the book concludes by setting the stage for the second entry in the series, Dr. Phibes Rises Again, with a stronger sense of a cohesive narrative for the entire series this time out than with the third book.

As always with this series, more questions are raised than are answered. Best of all, this definitely isn’t the end of the series. A fifth title, Dr. Phibes: The Real Androbots (co-written by Goldstein’s son, Damon) is in the offing and a Kickstarter independently-produced movie project, Dr. Phibes: Sophie, will launch shortly. Vincent Price may be gone, but the Phibes Legacy lives on and with father preparing to hand over to son, the series may have life in it for quite some time to come. All four titles are available as ebooks with the two latest volumes also available in trade paperback editions. The not so good Doctor is back and here to stay and that is reason enough for new fans and old to rejoice. Highly recommended!