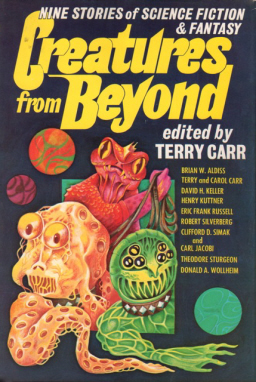 It shouldn’t be a surprise that I didn’t discover science fiction and fantasy through novels — not really. I discovered it by reading short stories in Junior High, and especially the enticing anthologies on display every week in the library at St. Francis School in Halifax, Nova Scotia. I didn’t really know what science fiction was; but if it had monsters on the cover, I was all over it.

The first anthology I can recall reading was Creatures From Beyond, a marvelous monster-fest if ever there was one. When I tracked it down again decades later, I was delighted to discover the editor was none other than Terry Carr, the legendary editor whose Best Science Fiction of the Year and Fantasy Annual paperbacks I read avidly all through high school — and who pulled William Gibson’s Neuromancer out of the slush pile at Ace Books.

I think the reason I still remember it so well after all these years is that, unlike most of the collections I checked out of the library, it wasn’t a kid’s book. It’s a genuine SF anthology, with short stories from Henry Kuttner, Clifford D. Simak & Carl Jacobi, Theodore Sturgeon, Donald A. Wollheim, Brian W. Aldiss, Robert Silverberg, and other top-flight authors.

Carr reasoned — correctly — that there was no better source for action-filled monster tales than pulp science fiction magazines and he mined them heavily to generate Creatures From Beyond. The fiction is drawn from Amazing Stories, Astonishing, Unknown, Other Worlds, Comet, Thrilling Wonder, Future, and a smattering of anthologies.

Of course, the other reason I remember it is Eric Frank Russell’s brilliant novelette “Dear Devil,” the tale of a handful of children who survive a nuclear apocalypse on Earth… and the curious (and hideous) explorer from Mars who helps put them back on track towards a new and better civilization. Rejected by all the major SF magazines of the time, it landed at Ray Palmer’s fledgling Other Worlds, where it almost single-handedly put the magazine on the map — and instantly made a name for the young editor who pulled it from the slush, 26-year-old Bea Mahaffey, who’d been thrust the reins of the magazine when Palmer was incapacitated in an accident.

Creatures From Beyond still makes delightful reading today. Packed with classics like Theodore Sturgeon’s “It” and Donald A. Wollheim’s “Mimic” — both made into successful monster movies — and lesser-known but no less worthy tales like Clifford D. Simak & Carl Jacobi’s “The Street That Wasn’t There,” it’s a fine collection of pulp monster fiction.

Creatures From Beyond was published in hardcover in January 1975 by Thomas Nelson Publishers and the Science Fiction Book Club. It is 180 pages. My copy is the book club edition and doesn’t have a price, but let’s call it $4.95. Used copies start at about 25 cents at Amazon.com.

And our coverage of Terry Carr includes:

This was one of the very first books I received from the old SF Book Club.
The 3 stories that I still remember best are/were “Dear Devil”, “The Worm” and “The Street that wasn’t there”. I forgot how long it’s actualy been since the name “Terry Carr” was all over the paperback racks. Come to think of it, you don’t see any of those names any more and most of them were big names at one time.

> you don’t see any of those names any more and most of them were big names at one time.

Very true. Robert Silverberg is still a big name, but very few of the others are on the shelves at all.

I think that’s the way it goes. When I was young people lamented that the greats like H.G. Wells and Jules Verne were no longer on shelves, and instead there were all these new names no one had heard of — like William Gibson, Charles de Lint, Gene Wolfe.

That’s why we do what we do at Black Gate: celebrate neglected fantasy in all its forms, from all eras. The forgotten pulp genius, and the brilliant young self-published author.

There’s always an audience for quality fiction. As long as that never changes, we’ll be here.

[…] Vintage Treasures: Creatures from Beyond […]

[…] Resnick and Barry N. Malzberg, in their long-running column, wrote about “lady editor” Bea Mahaffey (among others), glossing over her significant accomplishments in the field to focus on her looks. […]

[…] be. I read his brilliant short story “Dear Devil” in Terry Carr’s YA anthology Creatures From Beyond in the mid-seventies when I was in Junior High, and that’s all it took for his name to stick […]