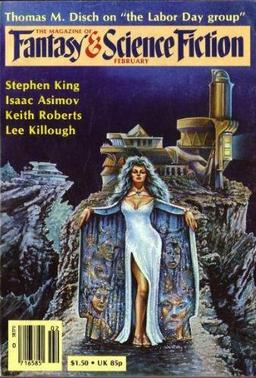 The Magazine of Fantasy & Science Fiction has put some delightful old content on their website for those who care to look, and earlier this month I came across their reprint of Thomas M. Disch’s Book column from the February 1981 issue, in which he compares the three Best of the Year volumes published the previous year.

1979 was a marvelous year for short SF, with many stories destined to become classics — including George R.R. Martin’s brilliant “Sandkings,” and his Hugo Award-winning “The Way of Cross and Dragon,” Barry B. Longyear’s novella “Enemy Mine,” Donald Kingsbury’s “The Moon Goddess and the Son,” Vonda N. McIntyre’s “Fireflood,” Orson Scott Card’s “Unaccompanied Sonata,” Richard Cowper’s “Out There Where the Big Ships Go,” and many others. Of course, Disch was as curmudgeonly as always.

The annuals are out, and here, if we can trust the amalgamated wisdom of our four editors, are the thirty best stories of 1979. It is in the nature of annual reports to pose the question, Was it a good year? and it pains me, as both a shareholder and a consumer, to answer that for science fiction, as for so many other sectors of the economy, 1979 was not a good year.

Against such a sweeping judgment it may be countered that sf is not a unitary phenomenon nor one easily comparable to a tomato harvest. Sf is a congeries of individual writers, each producing stories of distinct and varying merit. A year of stories is as arbitrary a measure as mileage in painting. Nevertheless, that is how the matter is arranged, not only by anthologists but by those who organize the two prize-giving systems, SFWA, which awards the Nebulas, and Fandom, which gathers once a year to hand out Hugos. The overlap between the contents of the annuals and the short-lists for the prizes is so great that one may fairly surmise that something like cause-and-effect is at work. As the nominating procedures are conducted in plain view, it seems certain that the editors will keep their eyes open for the likeliest contenders, since the annual that most successfully second-guesses the awards nominees has a clear advantage over its rivals.

Tomato harvest! At least he makes me laugh.

Disch compares these three volumes, what he calls “The Labor Day group,” presumably because they were all published around Labor Day:

And no, that Dozois volume is not the Ninth of his ongoing series from St. Martins, The Year’s Best Science Fiction, which will publish its 33rd volume this July. That series began four years later, in 1984. The Best Science Fiction Stories of the Year was begun in 1972 by Lester del Rey. Here’s the first volume, just to prove I’m not making stuff up: 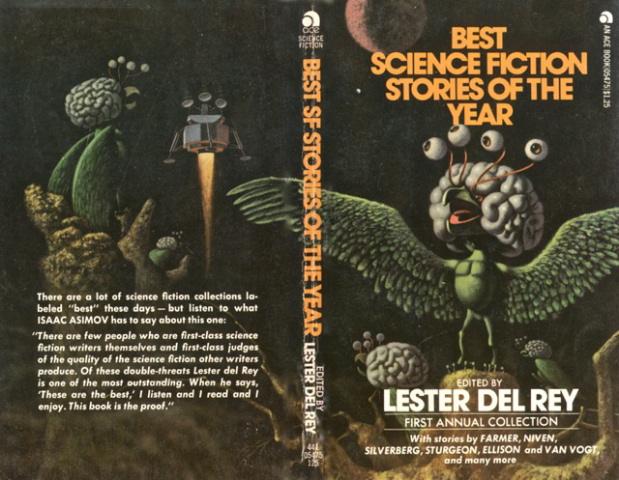 Gardner took over as editor of Best Science Fiction Stories with the sixth volume. The Ninth was the penultimate in the series, and it never even had a paperback edition.

Disch compares the contents of these three books to the year’s big award winners — and (shockingly) isn’t shy about sharing his thoughts on the Hugo winners, and the nominees.

The winner of the Hugo for short story, George R.R, Martin’s “The Way of Cross and Dragon,” appears in both the Dozois and Wollheim/Sara annuals. Though full of a good deal of incidental sf invention (droll aliens, pretty planets), the dramatic structure is like that of “giANTS,” but the idea being ferreted out by the protagonist is both more original and full of resonance. Martin contends that all supernatural religions are the result of someone’s decision to tell a whopping lie, a contention that deserves ampler and more serious treatment than it receives here. Were it set in 100 A.D. instead of in the far future, it might have grown teeth at least as effective as those belonging to Martin’s other winner this year (capturing both Hugo and Nebula for best novelette), “Sandkings” (in the Carr and Dozois annuals). Like “giANTS,” “Sandkings” is an insect-horror story; unlike “giANTS” it fleshes out its premise with ample and well-paced suspense, heaping on grue and ingenuity all to the way to the gratifyingly inevitable end. Apart from a couple of sideways glances in the direction of sex, “Sandkings” could have appeared in 1940 in Astounding without a ripple of anachronism, and if it had, we’d still be reading it today. I think it’s destined not only to become a great movie but a classic board game as well: it’s that neat.

There are at least three nominated short stories in the annuals that seem superior to the winning stories by Bryant and Martin. “Vernalfest Morning” (in the Dozois annual) is a relatively minor effort by Michael Bishop, but fiercely imagined within its small compass. (Bishop, I should remark, is probably the least representative figure in the Labor Day Group. Numerous stories and the recent novel, Trans-figurations, evidence a degree of extramural literary savvy and ambition that promises still better things to come. His chief point of correspondence with the Group is a willingness to set his novels in the far future of the sf consensus in which all trade sf ideas comfortably coexist?space warps, telepathy, aliens, catsup, onions, mayonnaise.) “Unaccompanied Sonata” by Orson Scott Card (in the Wollheim/Saha annual) is a grimly effective futuristic fairy tale, whose pastel colors adorn a heart of purest anthracite. The best story Bradbury’s written in years. 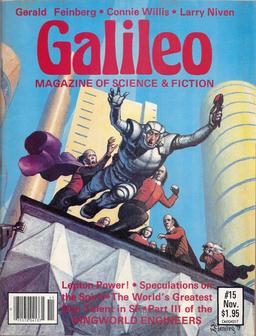 He has particular praise for Connie Willis’s first published story, “Daisy in the Sun,” originally published in issue #15 of Galileo (see right):

My own favorite among the also-rans is Connie Willis’s first published story, “Daisy in the Sun” (in the Wollheim/Saha annual). With lyric ellipses Willis describes a world in the grip of epidemic schizophrenia precipitated by news that the sun is going nova. The heroine is a sexually disturbed adolescent girl in a condition of fugal amnesia. All the way through I thought, “This won’t work,” but it did. What a great way to begin a career.

Of course, you could dismiss all this as sour grapes, as Disch’s own Hugo-nominee, the novel On Wings of Song, came in last in the voting that year.

For completeness, here’s the complete TOC for the Terry Carr volume:

Introduction by Terry Carr
“Galatea Galante, The Perfect Popsy” by Alfred Bester
“Sandkings” by George R. R. Martin
“Time Shards” by Gregory Benford
“In the Country of the Blind, No One Can See” by Melisa Michaels
“Re-deem the Time” by David J. Lake
“Down & Out on Ellfive Prime ” by Dean Ing
“The Exit Door Leads In” by Philip K. Dick
“Options” by John Varley
“In Trophonius’s Cave” by James P. Girard
“Fireflood” by Vonda N. McIntyre
“No More Pencils, No More Books” by John Morressy
“The Vacuum-Packed Picnic” by Rick Gauger
“The Thaw” by Tanith Lee
“In a Petri Dish Upstairs” by George Turner
“Recommended Reading – 1979 by Terry Carr
The Science-Fiction Year by Charles N. Brown

Introduction by Gardner Dozois
“Sandkings” by George R. R. Martin
“Blood Sisters” by Joe Haldeman
“Camps” by Jack Dann
“giANTS” by Edward Bryant
“Down & Out on Ellfive Prime” by Dean Ing
“Redeemer” by Gregory Benford
“In Trophonius’s Cave” by James P. Girard
“The Ancient Mind at Work” by Suzy McKee Charnas
“Vernalfest Morning” by Michael Bishop
“The Way of Cross and Dragon” by George R. R. Martin
“The Battle of the Abaco Reefs” by Hilbert Schenck
Honorable Mentions- 1979

And finally the Wollheim:

Introduction by Donald A. Wollheim
“The Way of Cross and Dragon” by George R. R. Martin
“The Thirteenth Utopia” by S. P. Somtow
“Options” by John Varley
“Unaccompanied Sonata” by Orson Scott Card
“The Story Writer” by Richard Wilson
“Daisy, in the Sun” by Connie Willis
“The Locusts” by Larry Niven and Steven Barnes
“The Thaw” by Tanith Lee
“Out There Where the Big Ships Go” by Richard Cowper
“Can These Bones Live?” by Ted Reynolds
“The Extraordinary Voyages of Amélie Bertrand” by Joanna Russ

John, I think Disch called them the “Labor Day” group because in his view they too openly yearned for a certain prize traditionally given out right around Labor Day.

Of course he did. I should have figured that out. Thanks, Rich.

I’d missed this post altogether when it came out, and until now. As I wrote a similar consideration of the Disch essay, I’ll note the link to it you cite is dead, and there’s live one available…and “Daisy” wasn’t the first story from Connie Willis by any stretch.

Thanks for catching that dead link… and for including a replacement link in your essay (which I quite enjoyed!) I have updated the link in the text above.

You should write posts for us, especially on the BOTY volumes. They’re a topic of continual fascination to Black Gate readers, and you clearly know the topic far better than I!

Kind of you! I might take you up on it…I have my own blog projects hanging fire…