In his Foreword to his Fourth Annual Collection of Best Science Fiction Stories of the Year, which gathered stories published in 1974, Lester del Rey makes the case for Sense of Wonder as the core literary virtue of science fiction.

There is another element that must be present in every good science fiction story. It should excite a feeling of wonder, of something beyond the ordinary. It is the expectation of finding such wonders that makes the reader turn to science fiction rather than to more conventional tales of adventure.

There was a time, forty or fifty years ago, when what was then called “scientifiction” had little more than this sense of wonder to recommend it. Most of the writing was dreadful, the characters were little more than stick figures, and the plots were creakingly devoted to nothing but gadgetry. Yet, bad as they were, these stories opened the imagination to wonderful vistas of the future, of the triumph of mankind beyond normal limits, and to all things strange and alien.

Today, the situation has changed. The newer writers — and the older ones who have survived in the field — have learned their craft well. The writing is incredibly better. Gone are the horible cliches of the worst of pulp fiction: the trite mad scientists, and the banal heroines who are mere props for the hero to save from a fate worse than death. Gone are the spate of pseudo-science words and the plethora of meaningless adjectives.

Happily, in the best of science fiction the sense of wonder is still with us.

We need that feeling of wonder today, perhaps more than ever, when mainstream literature and our daily newspapers keep telling us that — in the words of Wordsworth — “The world is too much with us; late and soon;/Getting and spending, we lay waste our powers…” We need to be reminded that the future is still unexplored territory and that we can read to the end of the sonnet and “Have sight of Proteus rising from the sea;/Or hear old Triton blow his wreathed horn.”

I don’t often get to mix Wordsworth with my science fiction; allow me to celebrate a little when it happens organically.

I recently looked at the Terry Carr’s Best Science Fiction of the Year #4, which also covered fiction from 1974, so when I found a copy of del Rey’s volume from the same year at Half Price Books for $1.49, I snatched it up immediately. Other than Rich Horton and Piet Nel, there probably aren’t a lot of folks interested in how the top reprint editors in SF differed in story selections 44 years ago, but I am. So let’s have a look.

Del Rey’s selection is very different indeed from Carr’s, and in fact there isn’t a single story in common between the two books. I can’t be sure if that was a rights issue, editorial courtesy, or if the two editors simply differed that drastically… all three are plausible explanations, really.

Strong as the line-up is, it is missing several of the major stories of the year, including Larry Niven’s Hugo Award-winner “The Hole Man,” Robert Silverberg’s Hugo nominee “Born with the Dead,” Philip K. Dick’s “A Little Something for Us Tempunauts,” and William Tenn’s “On Venus, Have We Got a Rabbi” — all of which are in the Carr book — as well as George R. R. Martin Hugo winning novella “A Song for Lya” and Harlan Ellison’s famous “Adrift Just Off the Islets of Langerhans.” 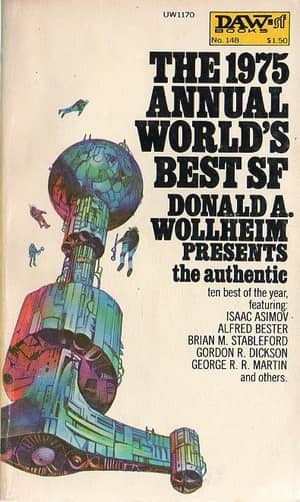 On that basis alone, I’d have to give the nod to Carr in this match-up.

Also, what the heck is a 1961 Silverberg story (“The Man Who Came Back”) doing in an anthology reprinting the best stories from 1974?

Every so often, something gets mislaid in editorial offices. In this case a story somehow wasn’t published for years after it was bought. Hence, we have a brand-new middle period Silverberg. And a very good one indeed, as Silverberg looks at just how stubborn a determined man can be.

A story gets mislaid? For thirteen years?? I don’t quite buy it. “The Man Who Came Back” originally appeared in the UK in New Worlds Science Fiction in 1961, but wasn’t reprinted in the US until it appeared in the December 1974 issue of Galaxy. I presume that’s the delay del Rey was talking about.

In case you’re wondering, Gardner Dozois did not edit a Best of the Year anthology in 1974. He took over as editor of Lester’s series beginning with volume 6 in 1977. He wouldn’t launch the massive The Year’s Best Science Fiction series with St. Martin’s Press, for which he’s best known today, until 1984.

Best Science Fiction Stories of the Year: Fourth Annual Collection was edited by Lester del Rey and published in hardcover by E. P. Dutton in July 1975; it was reprinted in paperback by Ace Books in May 1977 with a new cover by Paul Alexander. It is 254 pages, priced at $1.75.

The Best Science Fiction of the Year #4 was edited by Terry Carr and published as a paperback original by Ballantine Books in July 1975. It is 304 pages, priced at $1.95.

The 1975 Annual World’s Best SF was edited by Donald A. Wollheim and Arthur W. Saha and published as a paperback original by DAW Books in May 1975. It is 269 pages, priced at $1.50. The cover was by Jack Gaughan.

As a retired college English prof, it does my ol’ heart good to see a Wordsworth reference here! You tempt me to reply with some lines from Tennyson’s “Ulysses”: “…something ere the end,/ Some work of noble note, may yet be done,/ Not unbecoming men that strove with Gods./ The lights begin to twinkle from the rocks;/ The long day wanes; the slow moon climbs; the deep/ Moans round with many voices. Come, my friends./ ‘T is not too late to seek a newer world.”

The Del Rey selection seems just odd today. Wollheim and his stealth collaborator Saha do pretty good though, with “A Song for Lya”, “A Full Member of the Club”, and Bishop’s beautiful “Cathadonian Odyssey”, which knocked me flat when I read it in the second issue of F&SF I ever bought, plus interesting stuff from Stableford, Bester, Pohl (expanding a Kornbluth fragment, I assume), and Strete.

The Terry Carr anthologies were always my favourite yearly collections. His story selections just seemed to resonate with my own.

That’s a marvelous quote. Thanks for sharing.

Agree with you on both counts. After being so impressed with the Carr book when I revisited it in 2016, I was very curious to see del Rey’s take. In a way I’m glad to see so many different authors, but his choices don’t seem to connect with me nearly as well. Hard to tell what I might have thought in 1975, though!

Also agree with you on the Wollheim. I haven’t read it, but it looks fantastic, even today.

> The Terry Carr anthologies were always my favourite yearly collections…

I wasn’t the biggest fan of Carr’s YEAR’S BEST anthologies when I first read them — mostly because I was a young teen just discovering SF for the first time, and Carr consistently published thoughtful, adult work in these books, while I was hungry for more of his YA monster anthologies:

I didn’t rediscover his YEAR’S BEST books until about a decade ago, and I’m glad I did. They have become (in hindsight, and three decades late, but still) my retroactive favorites, for all the reasons I disliked them 40 years ago.

[…] Black Gate » Vintage Treasures: The Best Science Fiction 1974, edited by Lester del Rey, Terry Carr…. Definitely something in the air. As far as the ’74 annuals, it blows my mind that Wollheim was the only one to pick “A Song for Lya” which is on a short list of one or two hundred (you should see my long list) of best stories of all-time. The mostly short, more or less science, fiction of the 70s and 80s is what I read of Martin – I dunno this epic fantasy novel stuff, though I understand it’s found a fan or two. […]