I started playing Traveller in 1980, using Marc Miller and Frank Chadwick’s original 1977 boxed set from Game Designers’ Workshop. I really enjoyed it although — as I noted in my 2014 article on GDW’s Dark Nebula and Imperium board games — it was a little light on setting.

The original boxed edition of Traveller didn’t really have a setting — it was sort of a generic system for role playing in space, and it drew on the popular vision of a galaxy-spanning human civilization found in the science fiction of the time by Poul Anderson, Isaac Asimov, Keith Laumer, H. Beam Piper, and others. (James Maliszewski did a splendid job of re-constructing the formative SF behind Traveller in “Appendix T.”) It was a game desperately in need of a rich setting, and it found one in Imperium.

Looking back, that critique was perhaps a little harsh. Yeah, the 1977 boxed set forgot to include a setting, and the publisher had to steal one from Imperium. But it wasn’t long before GDW began to improve the situation by producing high quality supplemental materials for Traveller. One of their better efforts was the boxed set Tarsus: World Beyond the Frontier, designed by Marc W. Miller and Loren K. Wiseman and released by GDW in 1983. I recently tracked down a copy, and I really wish I’d had it for those early gaming sessions in the trailer in my back yard in 1980. 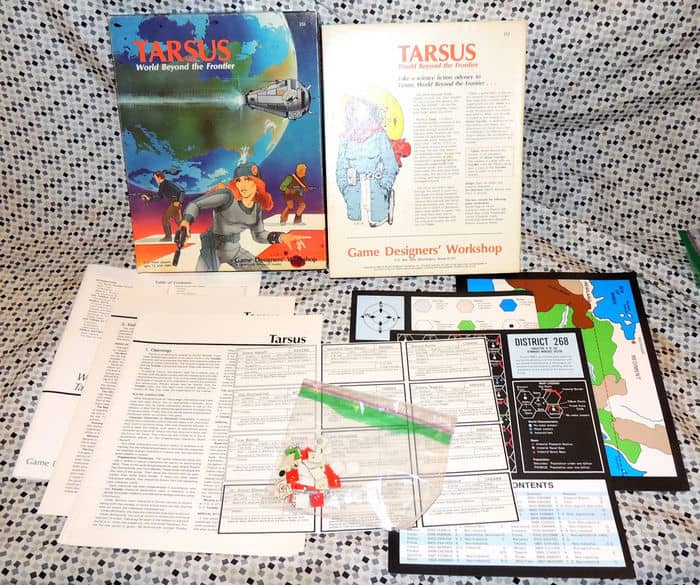 The contents of Tarsus (counters not included)

What is Tarsus, exactly? Here’s part of the teaser from the back of the box.

Tarsus [is] a colonial world beyond the frontiers of the Imperium… The fierce war which raged through this sector is now over, and troops are being mustered out. A band of loyal companions, veterans like yourself, has decided to accompany you. Some of them are in search of adventure, others seek wealth or power. You will need their skills and experience in your dealings with the unknown trouble you will face on Tarsus.

When a game takes in the entire universe it’s easy to forget how large and complex even a single system can be. Tarsus is a demonstration of how much scope for adventure one planet, described in detail, can provide. Included in this module for Starter Traveller, in addition to descriptions and details, are adventures for player-characters to undertake, but they by no means exhaust the possibilities of the background contained in this module.

Tarsus is described as an adventure module for Traveller, and indeed there’s plenty of adventure material within. It’s not a standalone product, and you need Traveller to make use of it. 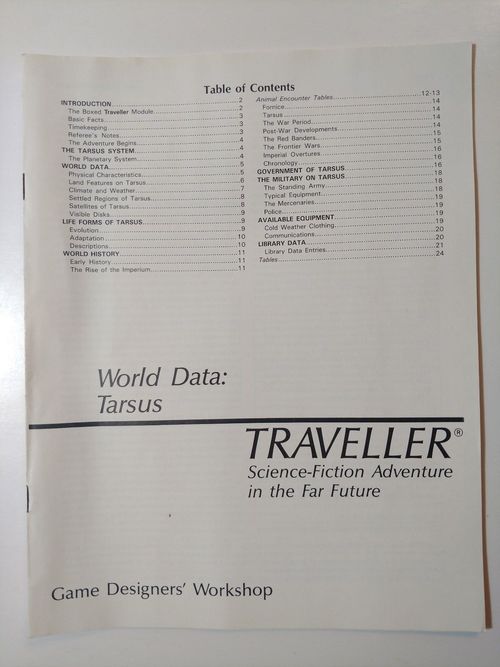 Tarsus is a splendidly conceived adventure supplement. In fact, as I read through it, I was simultaneously impressed and annoyed. I eventually abandoned Traveller for games with a stronger sense of place — including Call of Cthulhu and Gygax’s Greyhawk setting for AD&D — and if even a fraction of this material had been available in 1980 it would have gone a long way towards re-igniting my interest.

Still, there’s nothing preventing me from enjoying it today, and enjoy it I did. The box comes packed with a trio of maps (one subsector star map, and two planetary maps), a dozen character cards, a 24-page World Data reference, and five adventure scenarios. 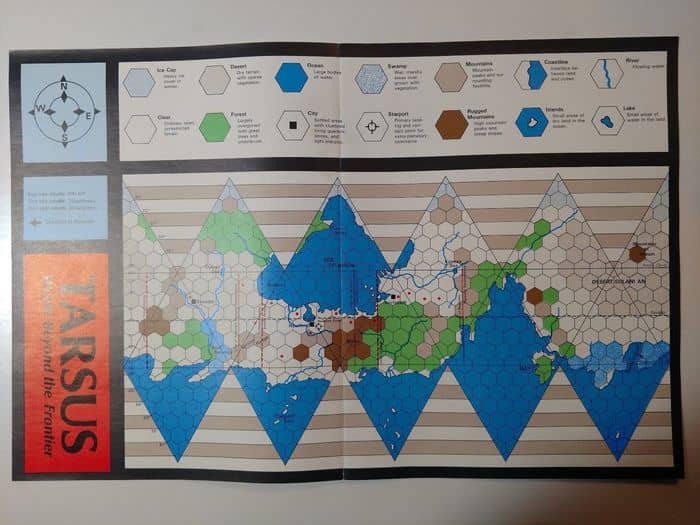 It’s probably overstating it to describe them as “scenarios.” In typical early-80s gaming fashion, they’re less detailed than that, but they still do the work of outlining the bones of a number of compelling adventures, including:

It’s an eclectic and diverse range of scenarios that rewards a wide variety of play styles, from grubbing for money in a shadowy crater to doing back-room deals with power brokers to secure a seat on the most powerful political body in the star system. And it pretty much guarantees there’s something for every player, whether they enjoy trigger-happy shenanigans with laser rifles, puzzling out cryptic clues to the location of a functional spaceship, or political maneuvering. 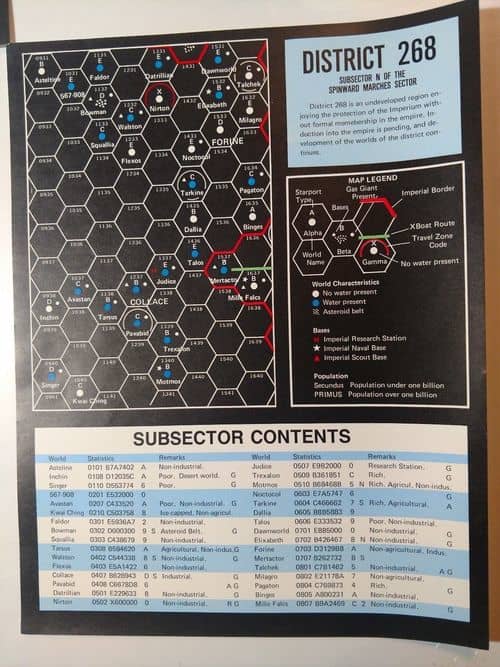 While each of the five scenario books is very slim — scarcely 3-4 pages each — there’s a lot of material packed in there for the game master. And the scenarios dovetail well, and build on each other nicely.

But really, Tarsus isn’t meant to be a fully fleshed-out adventure pack in the modern sense. It’s more of what we’d call a sandbox setting today — a cleverly designed setting that doesn’t require players to follow a script to have fun, but rather encourages them to pursue their own interests, and has lots of rewards for players who do just that. 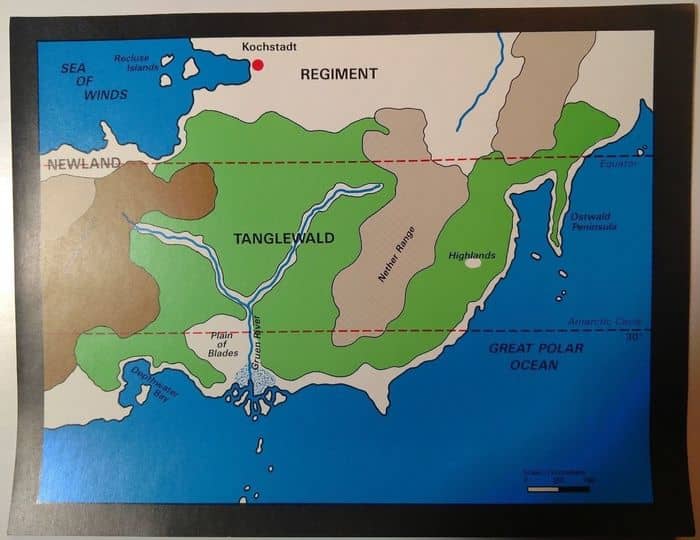 In short, Tarsus is meant to be an exciting home base for a long-term Traveller campaign, a world where players can get rich, find a starship, make friends and accumulate political power. All the things you need to really blaze a path across the stars.

Just as importantly, it’s meant to fire the imagination of a creative Game Master so she can create her own adventures, or flesh out the ones here. There’s enough material within these pages to give even the most novice GM the flavor of a successful campaign. In many ways it’s an ideal starter-campaign for old-school Traveller… or maybe even a more modern version of the game. 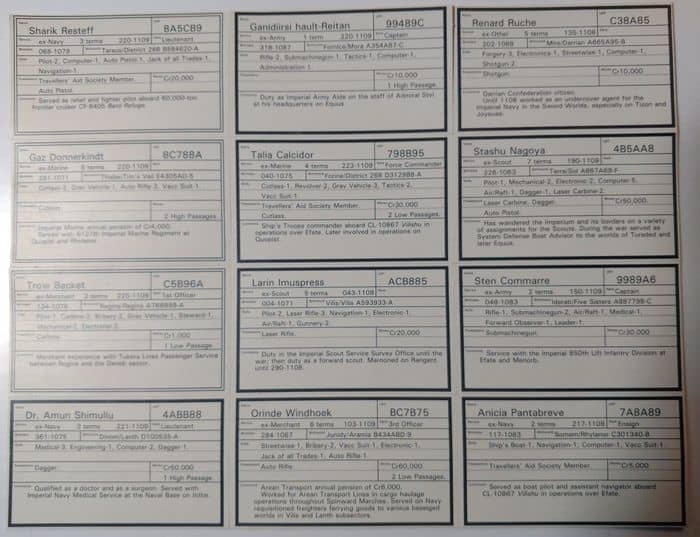 Although that does raise an interesting question. Tarsus was written when there was only one flavor of Traveller: the original boxed set. I have no idea how well the material would adapt to more recent rules set, mostly because I’m not familiar with it myself. I’ll leave that as an exercise for someone who’s kept up-to-date on the newer versions of the system, like Martin Page.

If you’re interested in Tarsus (and why wouldn’t you be?), copies are easy to find and quite inexpensive. I bought an unpunched copy in great shape on eBay in March for $9.63. 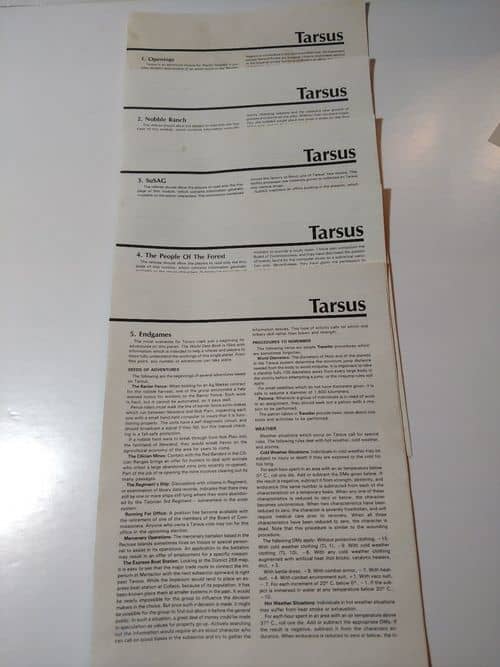 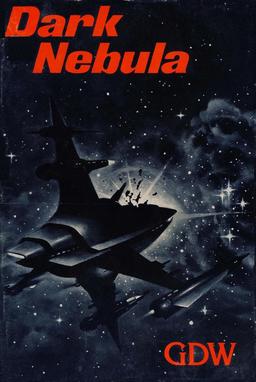 Speaking of newer editions of Traveller, we’ve covered more than a few over the years here at Black Gate. Here’s some of our more recent Traveller/GDW coverage:

Tarsus was designed by Marc W. Miller and Loren K. Wiseman, and published by Games Designers’ Workshop in 1983. The box cover was painted by David Deitrick. A PDF version was released in 2010.

Read more about Tarsus at:

If you don’t have it yet, I’d strongly recommend tracking down a copy of Beltstrike. IIRC, GDW’s original master plan was to do a box for every(?) world in District 268, but only two made it into production — Tarsis and Beltstrike (asteroid mining in the Bowman Belt).

John, did you see that Steve Jackson Games is reprinting Triplanetary?

> If you don’t have it yet, I’d strongly recommend tracking down a copy of Beltstrike.

Believe it or not, I don’t have a copy of Beltstrike. I will remedy that immediately!!

> John, did you see that Steve Jackson Games is reprinting Triplanetary?

[Dashes off to Google]