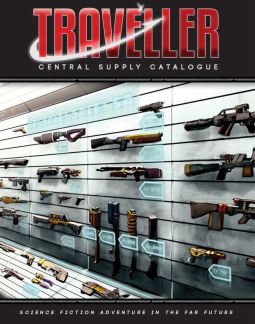 Traveller Rule 0 is, roughly, “The Referee Can Make S…tuff Up.”

Even so, in the case of equipment, it’s handy if somebody else has worked out the details, and if the stuff doesn’t just break the universe.

Edgar Rice Burroughs could put in Radium Rifles — fantastically accurate at fantastic distances — and then ignore the logic of their existence and write a Sword and Planet romp. However, if RPG players find a loophole, they will “exploit” it; and in a simulationist game such as Traveller, that’s what they’re supposed to do anyway. You can’t tell players, “be creative in your problem solving, but not in this or that area”.

This has to be especially true for rumbustious teenagers… which takes me to my son’s gaming group, for whom I’m planning to referee later in the summer. They’re not really interested in narrative or genre conventions, or even schooled in them. (Some of them — shock! — haven’t watched Firefly yet.) So they’re bound to break what’s breakable.

With this in mind, I asked Mongoose to send me a review copy of the Traveller Central Supply Catalogue.

It’s a 150 page hardback, with nice authoritative binding. There’s an index at the back (hurrah!), nice illustrations throughout, and a lots of equipment with supporting rules.

The expanded equipment lists also include items from the Core Rulebook, making it self-contained enough to just hand the thing over to players when they want to go shopping. The “players’ reference” angle more than justifies the use of paper real estate for amusing adverts and flavour images: the book is the game’s user end.

I have a few quibbles.

Not enough thought has been given to ease of consultation. The Index lists items, not mods or additional rules. The order is a bit perverse — trying too hard to be a faux catalogue? — with armour and weapons presented at different ends of the book. Each category of equipment is listed in alphabetical order. For military gear,  ascending order of cost would have been more useful — that’s how people shop.  The lists of modifications are visually confusing and hard to scan because the titles don’t really stand out. Finally, costs are given without commas and left-justified. This gives us wonderful listings such as:

However, let me say upfront: none of this is a showstopper. This is a really useful source book, full of things that will spawn adventure or at least make it easier to referee.  I’m going to review it section by section, some requiring more attention than others…

A brief introduction emphasises that the referee can pick and mix, that not everything belongs in the standard Third Imperium gameverse, but that some items that don’t really belong may turn up from time to time anyway, because human technology is like that — all sensible advice and ammunition against rules lawyers.

Equipment availability, whether legitimately or via the black market, especially if they are much lower or higher tech than the planet you are on. There’s a table with rather more dice modifiers that would seem ideal. However, it does reflect the time Travellers would have to spend, and makes the players engage with the restrictions of the setting. The black market rules include what happens if you mess up and provoke a response from what passes for the local police.

Table of restrictions and black market premiums according to class of weapon: Unrestricted, Civilian Use, Paramilitary Use (e.g. by police), Military Use, Restricted Military Use, Prohibited (e.g. nukes (!)). The restrictions are sensible. For example, even if owning them is legal, strictly military weapons such as advanced combat rifles or support weapons, usually require connection to some kind of accredited mercenary organisation. This makes law levels more plausible, such that even on a relatively lawless world, you can’t wander around flouting an automatic weapon without somebody asking you why you have it. However, the table doesn’t quite integrate with Law Level either and leaves it to the Referee to assess local conditions.

Overall, this useful chapter can help turn assembling a load-out into a mini adventure. It also supports shifting the emphasis away from going utterly tooled up whenever you can — you still need a permit for that revolver, ma’am, here’s the 100 page form… — and potentially brings fisticuffs and knife fighting to the foreground, Dumarest style.

You can immediately see where the Weapon and Armour benefits from Character Generation fit. Under these rules, a military weapon is hard to get hold of, and even harder to carry around legally. In anything like the 3rd Imperium setting, the Weapon Benefit — which otherwise seems a poor alternative to good old Credits — would come with a universal licence permitting you to end-run around local bureaucracy. It’s a pity this chapter didn’t cover that!

Weapon Traits — Dangerous (“…as lethal to the Traveller using it as his intended target…”), Fire (“…sets target on fire…”), One Use, Silent, Smasher, Very Dangerous (“Only a madman uses a weapon with the reputation of this one…”) — plus an useful inset (I wish they’d make these more visually distinct) on Forward Observers.

This is the point where I started to get a bit excited… However, it reminded me that I have issues with the Traveller melee rules. A “Smasher” can’t be parried, but surely that should also mean that you can’t parry with it. Easy enough to house rule (which I did).

It’s also worth noting that the Index only covers items of equipment. There’s no entry for Weapon Traits individually or as a topic.

At this point, the book gives up on chapter numbers and turns into a faux supply catalogue. The information is well set out, with items in alphabetic order under each sub category. That’s not brilliant — for armour, ascending cost would have been easier to navigate. However, my only major complaint is that it doesn’t provide summary tables.

“Personal Protection” really means “Armour”. They really should have just called it that! The chapter divides between Armour, including environment suits, and Battle Dress.

Armour offers a much, much wider range of than in the Core Book — expanding the original 10 items to 47. It contains some interesting (from the an adventuring point-of-view) gear, including “Diplo Vests”, basically hi-tech secret armour (similar to Dumarest’s armoured clothing), and some Anti-Psi options. It segues into Monster Manual, with several kinds of Archaic Armour and a section on Battle Dress (i.e. heavy power armour) more likely to be encountered on enemies, than on Travellers. Some of these could have been rolled into single types, for example do we really need a distinction between Flak Jacket and Flak Shell? On the plus side, there’s a handy list of electronic suites by Tech Level, which would do well on a Referee’s Screen.

The list of Modifications is — as a GM — frankly overwhelming. I really wouldn’t want to have to keep track of a game where everybody had these. However, I can see some would be useful when players were prepping for particular environments or missions. The mods for Battle Dress are all about weapon slots, and underline the way that, at that end of the scale, you’re really stomping around in a one-man AFV.

What this section is missing is a nice summary table as per the Core Rulebook. You really have to browse to find what you want. For this reason, plus complexity, I would be inclined to treat most things on the list as non-standard, but throw them in like spices to add colour and variation.

I also note that it doesn’t really resolve the Cr10,000 Armour Benefit from character generation. In the Core Rules, there’s a big gap between Reflect, at a mere Cr 1,500 and Vac Suit, at Cr11,000. You simply can’t buy anything for Cr10,000! The Central Supply Catalogue offers the clumsy Poly Carapace at Cr10,000, but otherwise doesn’t plug the gap.  I’m now inclined to houserule the benefit up or down a decimal place.

I can now more easily referee some typical situations, and turn them into adventures. There’s specialist equipment that fills in the blanks e.g. regarding law enforcement armour, but also enabling Travellers and their enemies to optimise for particular situations. Overall, there are qualitative as well as quantitative differences between the different items of equipment, and it’s qualities rather than quantities is where stories come from.

So, quibbles aside, so far so good.

M Harold Page is the Scottish author of  The Wreck of the Marissa (Book 1 of the Eternal Dome of the Unknowable Series), an old-school space adventure  yarn about a retired mercenary-turned-archaeologist dealing with “local difficulties” as he pursues his quest across the galaxy. His other titles include Swords vs Tanks (Charles Stross: “Holy ****!”) and  Storyteller Tools: Outline from vision to finished novel without losing the magic. (Ken MacLeod: “…very useful in getting from ideas etc to plot and story.” Hannu Rajaniemi: “…find myself to coming back to [this] book in the early stages.”)