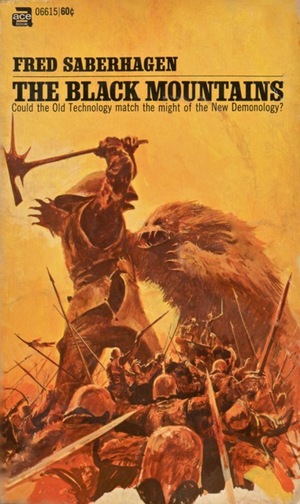 I ended last week’s review of The Broken Lands (the first part of Fred Saberhagen’s The Empire of the East) by saying it felt like something big was coming. I was right! The second book, The Black Mountains (1971), is one great big splashy explosion of pulp majesty. Even though I liked The Broken Lands, I didn’t get why Gary Gygax included it in Appendix N, the list of books that inspired his initial vision of D&D. Now I get it, 100% and absolutely.

Following the defeat and death of the villain, Satrap Ekuman, the Free Folk of the West are preparing to bring the war directly to the Empire of the East. Som the Dead is one of the greatest lords of the Empire, and its viceroy in the Black Moutains. Each of the lords has given himself to the demonic powers that rule the Empire and in exchange received special abilities. Som’s is that any attacks on him are reflected back at his opponents, making him nigh invulnerable.

In addition, among his army is an elite guard who wear metal collars. When they are severely or mortally wounded near the mountains, they are carried off to a secret lake of healing elixir by flying metal devices called valkyries. Finally, living under the mountains Som rules over, is the mighty and powerful demon, Zapranoth. To face him unprotected by magic leads to madness. With him live several other, lesser demons. It would seem Som the Dead is impossible to overcome.

Against these enemies Thomas, commander of the Free Folk, plans to lead his army. Fortunately, he is aided by wizards of his own, Gray foremost among them. He has secured the services of a djinn that posessess an understanding of technology, something magic has difficulty overcoming. Thomas has also found and captured the essence of two of Som the Dead’s demons. Control of a demon’s essence allows the owner to command or even destroy the demon. Deprived of two major elements of his army, Som the Dead may just be vulnerable to defeat. 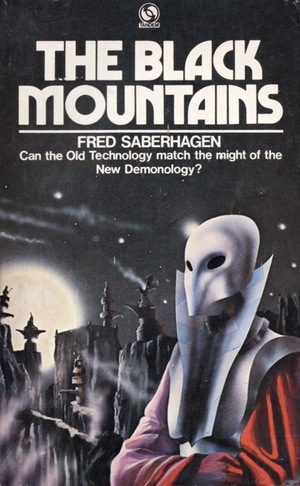 The adventures of Rolf, ostensible hero of The Broken Lands, and the Satrap Chup, are told in alternating chapters. There’s little more to Rolf than some ink on a page. Saberhagen gives him a few fun scenes, particularly one where he shows off his innate understanding of technology and gets the djinn to explain how to make helium balloons with which to attack Som the Dead’s fortress. He really serves, though, as the reader’s eyes on the Free Folk side. Through him we get to see the shifting tide of battle and the arrival of Zapranoth in the sky above the armies.

“Som is on the battlement,” said someone. “See, there. I think he wears a crown of gold.”

Rolf shivered. The day was chill. Winter was near at hand, and this place was high.

“If he takes the field,” warned Loford, “do not strike at him, but only ward his blows. The wound you would inflict on Som the Dead is likely to become your own to bear.”

Gray, too was shivering, calling for a cloak.

Why should the sun seem dimmer, when there were no clouds? And Rolf had a feeling in his guts like that of being lost, alone, at night amid a host of enemies… and now, why should he think there might be something wrong with the mountain, that it might crumble and collapse beneath his feet? Loford, Thomas, all of them, were beginning to look at one another with dread.

It is Chup’s tale that is the real focus of The Black Mountains. Crippled in battle, forced to live as a beggar among his enemies, he grabs at the offer of help from his wife, the devious Charmian. She escaped her father’s defeat and now lives safely with Som the Dead. She sends a demon to Chup, offering to heal him. In return, he must recover and bring to her a love charm made with her hair and now carried by Rolf.

When he makes it to the supposed safety of Som’s base, he finally opens his eyes to the real nature of the Empire of the East. For years he avoided making the final pledge to its demon lords, but Som makes clear the time has come when he must step forward or suffer for refusing. Chup agrees, but soon realizes he is unwilling to pay the price demanded of him. The hints of nobility present in Chup in The Broken Lands ferment, and as he wends his way through the demon-haunted caverns under Som’s castle, he finds himself transformed. The reformed villain isn’t the freshest of characters, but Chup has enough dash, and finally humanity, that it works well enough.

If there were suggestions of a post-apocalyptic Gamma World scenario in The Broken Lands, The Black Mountains is way past mere suggestions. Again, Saberhagen reveals the origins of the technology. The valkyries carry nameplates, unintelligible to the characters, that read: 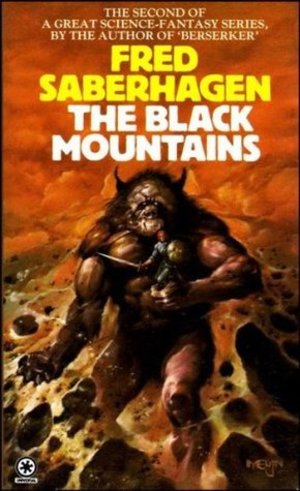 Now we start to see what can only be mutated animals. Kept in caves under Som’s castle are giant centipedes to which prisoners are occasionally fed. The lake of healing elixir is controlled by a great creature called the Beast-Lord Drafutt. Not a demon, djinn, or elemental, he existed even before the catastrophe that changed the world — and him.

Draffut spoke on, as if relieving himself of thoughts and words too long pent up. “I was not in the Old World as you see me now. Then I could not think. I was much smaller, and ran behind human beings on four legs. But I could love them, and I did, and I must love them still.

Under his control are small creatures, possibly marmots, that can speak after a fashion and do his bidding.

The entire second half of The Black Mountains revolves around the battle between the Free Folk and Som the Dead, and Chup’s search for the essence of Zapranoth. The battle is wild, and would look great on the screen. With a fleet of war-balloons, clashing armies, magic duels, and terror-inducing demons, it’s all so very cool.

Chup’s quest, which involves him convincing Charmian to cut off his head among other things, is pretty wild as well. While the battle rages above him on the mountainside and inside the castle walls, he is confronted by Lord Draffut himself.

The grip upon his hair now turned his pendulum-head around, and now he saw the High Lord Draffut’s face. It was a countenance of enormous ugliness and power, more beast than human certainly, but gentle in repose. And now Chup saw that in his other hand the Beast-Lord held like a doll the nude and headless body of a man. Like a child washing a doll he held the body down, continually dipping and washing it in the Lake of Life. With the splashing and the motion the brilliance of the liquid intensified into soft explosions of color, modulating in waves of light the steady gentle lumination of the air inside the cave.

And now, in his enormous shaggy hand, very like a human hand in shape but far more powerful and beautiful, the High Lord Draffut raised the headless thing and like a craftsman turned it for his own inspection. Like that of one newborn, or newly slain, the muscular body writhed and floundered uncontrolled. On its skin Chup could count his old scars, like a history of his life. He marked the jaggedness of the neck stump, where Charmian had hacked and sliced unskillfully. From its severed veins the elixir of the lake came pumping out like blood, and tinged with blood.

It feels like Saberhagen really unleashed himself in The Black Mountains. He was setting things up in The Broken Lands, giving the reader a basic understanding of the rules of this world; now he could cut loose. Djinns machine metal on the spot at a wizard’s command, demons drive men to such madness they try to eat rocks, titanic figures battle while men fight each other at their feet.

Now when he looked back at them Rolf saw the two mighty fighters plain. The Lord of Beasts was biting down upon the armored shoulder of the Lord in Black. Draffut’s drawn-back lips revealed enormous fangs, and these were sunken in. Rolf saw that wherever Draffut touched the black armor, it moved and flowed and yielded to the resistless life that poured from him. Around the demon’s waist his huge beast-forearms, bright with glowing fur, were locked like mortised logs to hold and crush.

When Chup finally confronts Zapranoth, you can feel the fear rising in Chup at the same time it’s rising in the demon. By the time they’re done, you can almost believe the incantation spoken by Chup would really work. For all its veneer of realism, there’s great big crazy stuff on display here, and I love it.

Again, Saberhagen’s writing is more good craftmanship than poetry, but that seems especially well-suited for the book. “Lo” and “thus” appear a few more times in this book than needed, but for the most part he sticks to a more naturalistic and dirty style than was common to fantasy of the early 1970s. I think it works really well.

Even with the end of The Black Mountains, neither the reader nor, I suspect, Rolf and Chup, have learned what lies in the heart of the Empire of the East. The mysterious Ardneh is only mentioned once. Who or what rules the empire remains unrevealed. Only that it is deeply and inexorably evil is made clear. I give a lot of credit to Saberhagen for managing to hold back and keep me in suspense two whole books into a trilogy.

So next week I’ll bring my review of The Empire of the East trilogy to a close with my look at Ardneh’s World (1971), originally titled Changeling Earth. I am really excited at the prospect of reading just how the heck Saberhagen explains everything.

Between your review and Jeffro Johnson’s Appendix N book, I really need to get my hands on a copy of Saberhagen’s The Empire of the East trilogy. We have a pretty good used book store in town and the library at the university where I work has been dumping old sci-fi/fantasy paperbacks for 50 cents a bundle. Recently picked up Gardner Fox’s Kothar and the Wizard Slayer.

Because I forgot it was Appendix N, I forgot to re-read Jeffro’s entry. I must rectify that.

Well, only Changeling Earth is listed explicitly in Appendix N, but it does say et al afterwords, so I would interpret that to mean the entire trilogy. Jeffro emphasizes the connections to Gamma World more than D&D with the series, sort of like how you also mentioned it. Did Gamma World have its own Appendix N?

@NOLAbert – While it does, it only reccomends three books and a movie: Hothouse by Brian Aldiss, Starman’s Son by Andre Norton, Hiero’s Journey by Sterling Lanier, and Ralph Bakshi’s Wizards