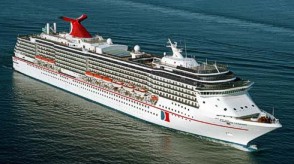 Tomorrow morning my three children and I take a flight to Tampa, where we’ll board the Carnival Legend cruise ship, sailing to the Grand Cayman Islands, Cozumel Mexico, and Belize. The trip is part of a celebration for my parents 50th wedding anniversary, so we’ll be sailing with our entire extended family. Sixteen people — minus Alice, who’s staying home because she couldn’t afford to be away from school that long. (I understand. I’m leaving my laptop, and it was a close call whether I could bear to be away from it that long).

There’s no cell phone or Internet coverage on the ship. This will be the first time I’ve been away from the Internet for more than 24 hours in over a decade. I may need to be sedated.

If you’re one of the 60-100 people who e-mail me on an average day, I apologize in advance for ignoring you. If you really need to reach me because there’s a problem with your subscription, or you sent me a story during the Civil War and I haven’t responded yet, or you’re just lonely, your best bet is probably a postcard. (I’m kidding. If you really need to reach me in the next 10 days, forget it).

I’ve never been on a cruise before. My parents (and my co-worker Corey) tell me they’re wonderful. Last time I was on a ship bigger than a rowboat, I was crossing the English channel on my honeymoon. Our brief stop-over in Dover turned into a two-night stay while I recovered from near-fatal sea sicknesses.  Our trip to Ireland had to be completely scrapped (16 hours in a ferry? No thank you!). I’m hoping the cruise ship Carnival Legend will have better stabilizers. Seven days is a long time to be clinging to a balcony railing.

I’ve spent the past week agonizing over what books to bring (come on, you know you’d do exactly the same thing). I plan to be on a deck chair on the sunny side within five minutes of departure. Here’s the final list.

This list took some planning. I’m bringing the Asimov anthologies because they’re two of my favorite books, and despite the fact that I’ve had them for over 35 years, I still haven’t finished them. Big books are hard to hold up that long.

The Robert E. Howard collection is on there because of a dinner I had with some fellow Sword & Sorcery fans at the Windy City Pulp & Paperback show in 2010. “I like Robert E. Howard just fine,” I said in the middle of the conversation, “but I’ve never read any of his Conan stories.” Everyone stopped talking. “Never admit that again,” Howard Andrew Jones advised me privately later.

Child of Fire by Harry Connolly and Sandman Slim by Richard Kadrey are both opening volumes in very highly regarded fantasy series, and Peter V. Brett’s The Warded Man comes highly recommended by several close friends. The rest are just titles that grabbed my attention over the past few years.

This is the first vacation I’ll be bringing my Kindle Fire, crammed with the latest issue of Fantasy & Science Fiction, public domain collections of H. Beam Piper and Robert E. Howard, and the newest volume of Jonathan Strahan’s Best Science Fiction and Fantasy of the Year. If it falls in the pool, I’m going to be bummed.

While I’m gone I’m leaving Howard Andrew Jones and Bill Ward in charge of the blog. Behave, everyone. Remember that C.S.E. Cooney has administrator privileges and can break up any fights — by force, if necessary. Be excellent to one another. And if anyone wants a souvenir from a Mayan ruin, tell me now.

Have fun! I just got back earlier this month on a honeymoon cruise to grand cayman and Cozumel. If you can be sure to check out the mayan ruins in Mexico. Also if you get sea sick bring plenty of stuff to help with that. We were on a very large boat and one night the wind was so bad it was hard to walk from place to place.

I know what you mean about the reading thing I fretted over it as well. Smooth sailing and I wish you the best of trips!

Oops didnt read your whole post about the ruins. Also so it’s weird, I e read some Conan stories but I find I like the kull
stories more than the Conan ones I’ve read. Maybe I just like how unexpectedly philosophical kull is.

Dramamine and Bonine are among the crowning achievements of human civilization. I conclude that every time I travel by air or water. Conan has misgivings about civilization, but you can tell by his career in piracy that he didn’t suffer from seasickness.

Somewhere, Howard Andrew Jones is beating his forehead against his computer screen, saying something like, “You just admitted it again!”

Someone ought to write a short story in which you bring back a sinister souvenir from a Mayan ruin, and an Ancient Mighty Curse besets the magazine. Badass feats of editorial derring-do ensue.

I got the keys to the blimp.

Your ship will probably have a small library on board. Why not throw caution to the wind, leave the kindle at home, and leave your reading choices at the mercy of the humble ship librarian? Are we adventurers or not??? My one and only cruise was to Alaska several years ago, and the library (really just a cozy bump in the hallway with a few shelves) had a nice Poul Anderson anthology, though someone left gum on the back inside cover.

By the way “Bill Ward” I am glad you and Ozzy and the gang will begin touring again this summer.

> If you can be sure to check out the mayan ruins in Mexico.

That’s on the itinerary!

> Also if you get sea sick bring plenty of stuff to help with that. We were on a
> very large boat and one night the wind was so bad it was hard to walk from place to place.

> Dramamine and Bonine are among the crowning achievements of human civilization.

My mother tells me she brings an adequate supply (she’s an old hand at cruises). Hope I can keep down whatever she gives me!

Sound like you’ve been on a cruise or two yourself?

> Somewhere, Howard Andrew Jones is beating his forehead against his computer
> screen, saying something like, “You just admitted it again!”

Hah!! I suspect you are very right. 🙂

> Someone ought to write a short story in which you bring back a sinister souvenir
> from a Mayan ruin, and an Ancient Mighty Curse besets the magazine. Badass feats of editorial derring-do ensue.

“Badass feats of editorial derring-do” sounds an awful lot like a routine week here at the rooftop headquarters.

But the short story still sounds like a great idea. 🙂

> I got the keys to the blimp.
> Airship, I mean airship…

> Your ship will probably have a small library on board. Why not throw caution to the wind, leave the kindle at home,
> and leave your reading choices at the mercy of the humble ship librarian? Are we adventurers or not???

Ah, so tempting! And right you are — there is a library on board. There’s even a picture on the website:

But seriously… why deprive me of the last week of enjoyment, as I selected, rejected, and re-selected the books I’ll be taking? I’ve already replaced one of the books on my list above with THE WAY OF THE WOLF (The Vampire Earth, Book 1), by E.E. Knight. Selecting the books is half the fun!

Please don’t throw yourself at the mercy of the ship’s library. The ship i was on had a decent size library with practically nothing to read in it. The only thing i found that looked interesting was a C.L. Moore short story collection.

I didn’t beat my head, exactly, but I certainly winced.

It’s not that John hasn’t READ any Conan. It’s that he’s never FINISHED any, even though he liked “The Tower of the Elephant.”

Lest you think John has the attention span of a gnat, I should say that he’s super busy running the mag and frequently has 60 to 70 hours at the day job.

Well, he still kind of has a gnat’s attention span… but an elephantine memory.

CHILD OF FIRE is awesome, and the sequel, GAME OF CAGES, is even better. I ran out and bought all three Twenty Palace books when I heard the series was being torpedoed by the publisher.

Enjoy your trip. *lol* Don’t feel bad, I had to switch to an ereader because I’ve a tendancy of carrying a backpack full of books. I can’t just choose one or even a few. *lol*

*slinks away* Um…Conan? *blinks* Was that Sir Doyle’s work too? *muttermuttermustreadsometimemuttermutter*

S.M. Stirling’s Emberverse
Michele Sagara’s Elantra series
Re-reading Anne McCaffrey’s books in tandem with the newr stuff that’s come out (Todd McCaffrey’s books) among some other stuff 🙂 Though I’ve kind of been stuck playing Oblivian too *lol* too much varied interest and not enough time.

I forgot to mention Laurell K Hamilton, Patricia Briggs, Carrie Vaughn…..ok so the list goes on too long 😛

I was always interested in the Kadrey, since Templeton makes T-shirts out of her Sandman Slim fanaticism. I hope you write MANY BOOK REPORTS for Black Gate when you get back. I am interested to see what you think of the Conan.

P.S. You should write more blogs, Alfred. You’re hella funny. But you know that, don’t you?

[…] Sunday February 5th, I returned to Chicago from a cruise with my family, my first vacation on a cruise liner and my first trip to the […]

[…] you check out Cody’s Bloodlands books. I started the first one on my Kindle during my family cruise, and they’re the literary equivalent of a great Friday night action film: well written, fast […]

[…] fantasy, I suggest you check out Cody’s Bloodlands books. I started the first one during my family cruise, and they’re the literary equivalent of a great Friday night action film: well written, fast […]