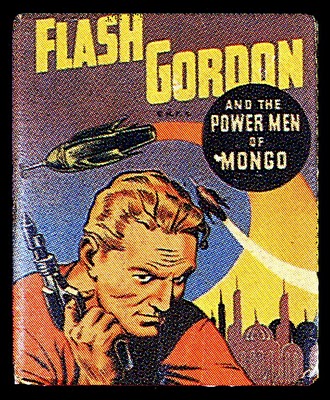 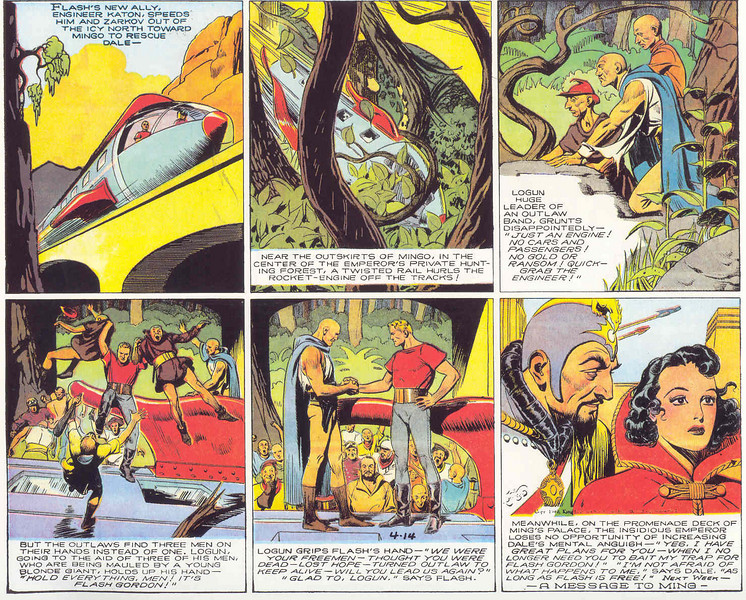 “Power Men of Mongo” was the fourteenth installment of Alex Raymond’s Flash Gordon Sunday comic strip serial for King Features Syndicate. Originally published between April 14, 1940 and January 12, 1941, “Power Men of Mongo” picks up the storyline where the thirteenth installment, “The Ice Kingdom of Mongo” left off with Flash, Zarkov and Katon speeding by rocket-engine to Mingo City in a desperate attempt to rescue Dale. The rocket-engine is hijacked by Logun and the remnants of the Freemen who happily rejoin the battle to overthrow the Emperor of Mongo. They succeed in infiltrating the city, but one of the Freemen, Pital betrays Flash for the reward promised by Ming. The Emperor sets a trap to capture Flash and the Freemen when they meet in a warehouse at night. Dale starts a chemical fire in the warehouse to warn Flash of the danger. Ming leaves her to burn. Unable to remove her from the blazing warehouse, Flash settles for putting out the fire and then making a daring escape.

Flash successfully infiltrates Ming’s royal guard and very nearly succeeds in rescuing Dale, but Ming outmaneuvers him. Hunted by the police, Flash is rescued by Katon who leads him to the underground electrical works where the Power Men of Mongo are employed. Ergon, head of the Lodge of the Power Men has already befriended Zarkov and is eager to have the Power Men join the rebellion against Ming. The Power Men cause a blackout in the palace during which Flash and Zarkov (disguised as Power Men) eventually succeed in rescuing Dale. It is interesting to note that Flash’s Power Man outfit makes him look suspiciously like DC’s superhero, The Flash. Zarkov is given more of a chance to show his heroism. A turning point comes when Flash finds many of his former Freemen working in Ming’s munitions factory. Flash orchestrates a workers’ revolt and has the men turn on their foremen and seize control of the factory. 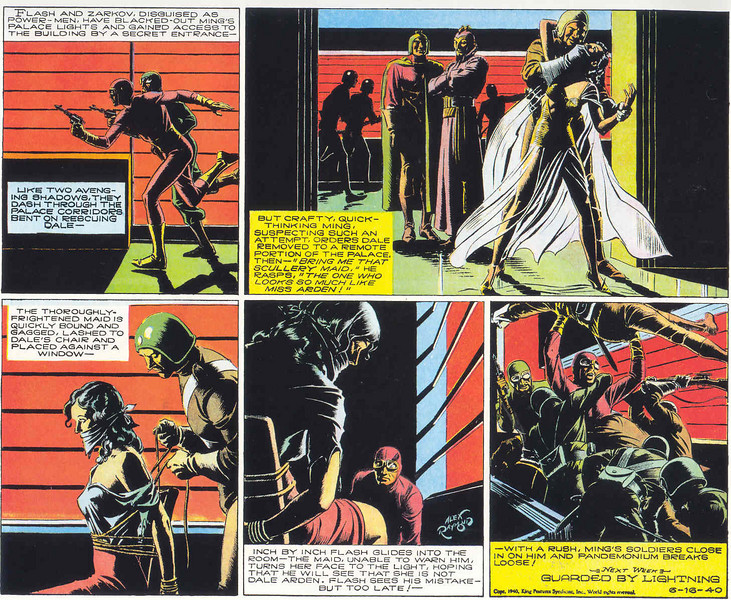 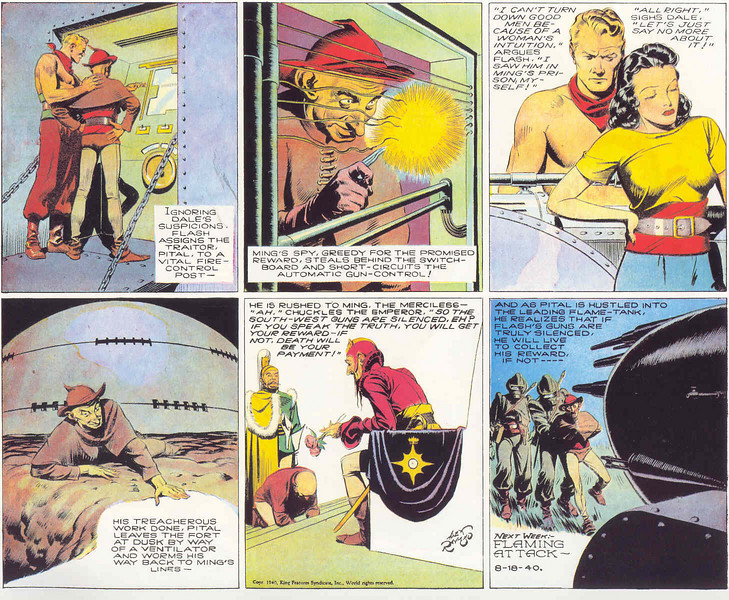 Unable to get near the munitions factory turned rebel stronghold, Ming sends the traitorous Pital to infiltrate the factory and sabotage the artillery. Ming’s thermiton tanks break through the open barrier. Flash leads the Freemen in a brave defense of their stronghold during which Pital is killed in combat. At Flash’s command, the Power Men lead the Freemen to retreat underground when Ming’s air fleet begins bombarding the factory. Flash and Dale join Zarkov who has rigged one of Ming’s tanks with a sound gun that fires sonic waves. Bravely infiltrating Ming’s ranks, the tank destroys Ming’s command outpost, but the Emperor avoids death by mere seconds. Ming orders his air fleet to bomb the tank. Our heroes are saved when the tank falls into a crater that leads to the underground system of the Power Men. 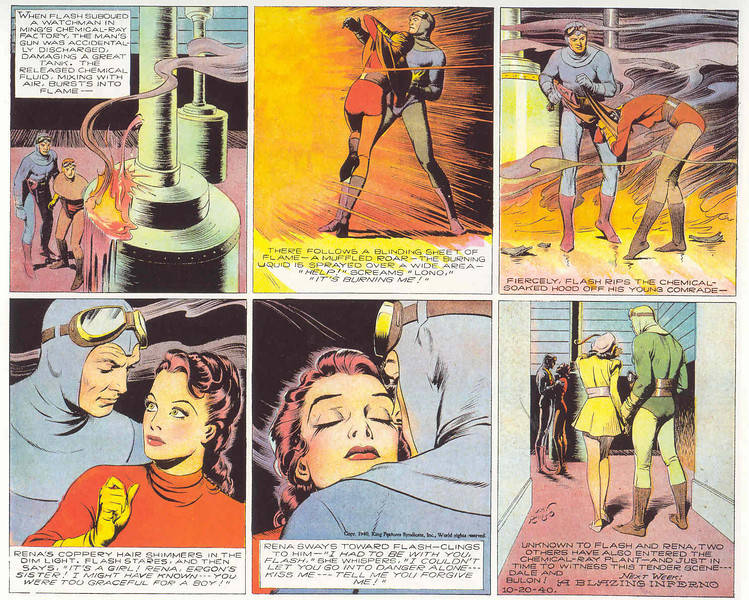 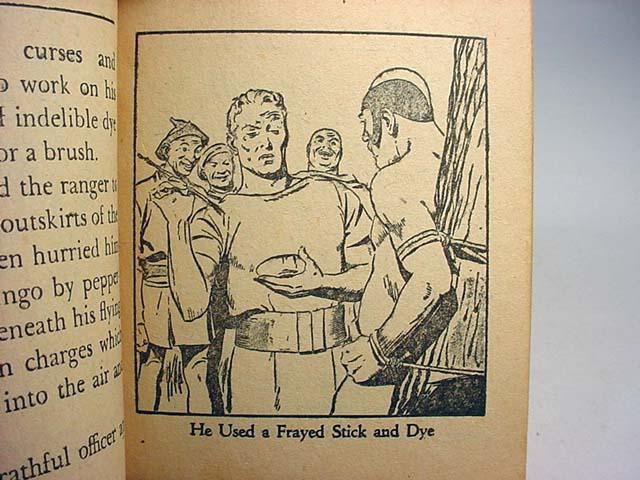 Reunited with Ergon and the Power Men, Flash meets Ergon’s seductive sister, Rena and her jealous boyfriend and Ergon’s right hand man, Bulon. The artwork is simply stunning no matter what Alex Raymond is portraying. A panel showing Rena in her bra and panties changing clothes seems particularly daring for 1940. Rena disguises herself as a boy (quite unlikely with her figure) and joins Flash in scouting Ming’s chemical plant as the target of their next terrorist strike. Dale and Bulon arrive at the chemical factory to find Flash and Rena embracing. Flash succeeds in blowing up the chemical plant, but a jealous Bulon plans to kill Flash when he and Dale seek refuge in a steelite mill. Dale narrowly rescues Flash from being dropped into a vat of molten metal. Flash is forced to fight his way out of the mill when Ming’s men surround them. Dale is left severely traumatized by the battle. Flash is forced to leave her in the care of the Power Men’s doctors. Rena informs Flash that Zarkov and several of the Freemen have been captured and placed in Ming’s concentration camp. The episode concludes with Flash setting out on a foolhardy one-man mission to liberate the captives of the concentration camp. The unmistakable influence of the War in Europe is evident on the storyline. The episode ends with a great cliffhanger of Flash on the outskirts of the concentration camp unaware that Bulon has followed him with the intent to murder him for stealing Rena’s heart. Next week we look at the climax of the series’ original story arc, “The Fall of Ming.”