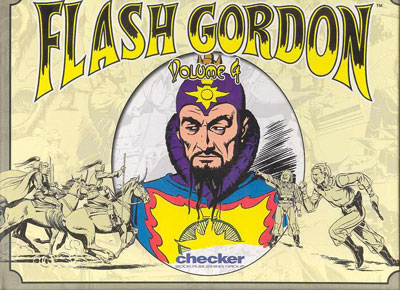 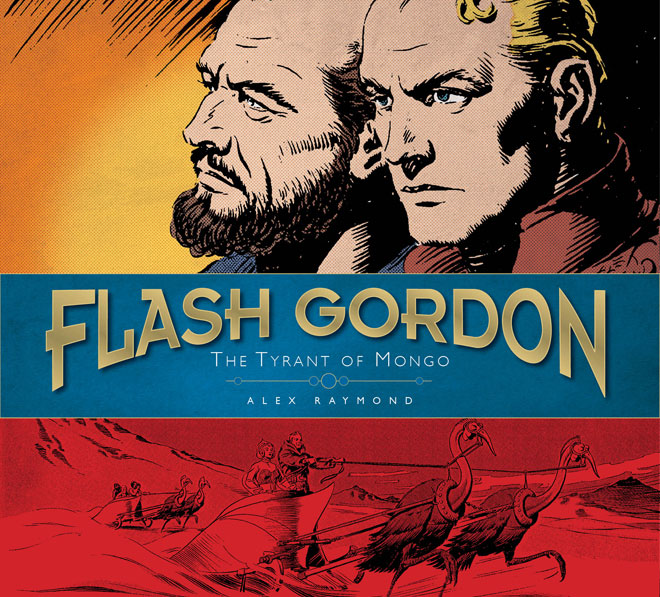 “The Tyrant of Mongo” was the twelfth installment of Alex Raymond’s Flash Gordon Sunday comic strip serial for King Features Syndicate. Originally printed between June 12, 1938 and March 5, 1939, the epic-length “Tyrant of Mongo” picks up the storyline where the eleventh installment, “Outlaws of Mongo” left off with Flash and the Freemen having sought refuge in the tombs of Ming’s ancestors. They befriend Chulan the caretaker who joins the Freemen. The flooding of Mingo City has thrown the kingdom into disarray. Flash and a group of Freemen storm the Navy’s flagship only to find its captain only too willing to join the fight against the Emperor.

Emboldened by their success thus far, Flash and Captain Sudin lead the growing ranks of Freemen in a daring prison break to free Ming’s political prisoners. Naturally, they have walked into a trap. Scores of Freemen are decimated by Ming’s forces. Flash and an injured Sudin manage to escape with their lives. Unexpectedly, Flash and Sudin bombard the prison from their rocketship and rescuing those survivors they can reach attempt to make good their escape.

Crashing into the sea, Flash learns they are short one oxygen tank and heroically stays behind with the sinking ship while everyone else makes their way to freedom. Dale and Zarkov succeed in rescuing Flash, but Zarkov doesn’t believe his chances for survival are very strong. Of course, thanks to Zarkov’s surgical skill Flash does survive and recovers sufficiently to hastily design and oversee construction of a complex series of underground tunnels to house the Freemen. Naturally, their new-found tranquility is short-lived as Ming visits the island to bury his recently-deceased uncle (who Ming had killed when he learned he was plotting against him). A word should be said about Alex Raymond reaching new heights with his artwork in this installment. Raymond’s work was constantly evolving and it retains its power nearly 80 years later. 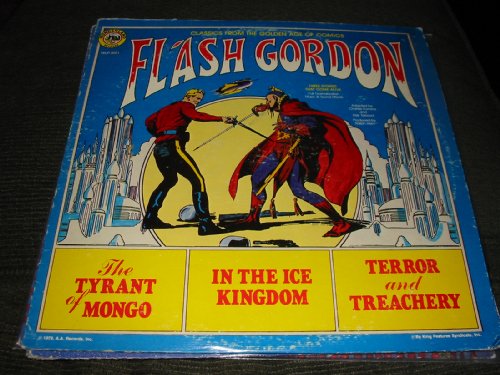 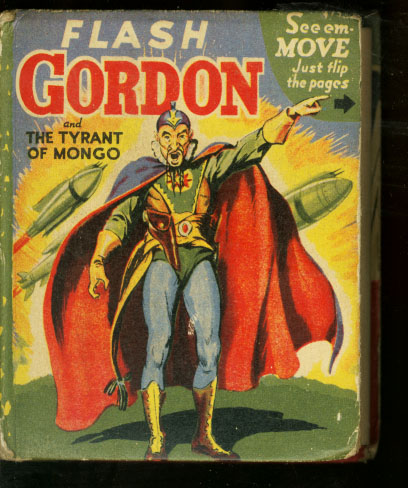 The Freemen attack as Ming’s uncle is ready to be laid to rest. Flash and Ming cross swords at last with Flash taking the Emperor prisoner and declaring via radio broadcast that Mingo is free. Captain Sudin is among the casualties of the raid. While Flash brokers peace with General Lin-Chu, Sonja plots an alliance with Ming after Flash spurns her. Just as Flash is ready to sign an accord with Lin-Chu, he learns that Sonja has helped Ming escape with his promise of wedding her and making her his empress. Flash orders an evacuation of the island knowing that Ming will now give the order to bombard the location. In a shocking turn, Ming keeps his word and weds Sonja in a royal ceremony and then immediately orders her beheaded. This is the first time Don Moore’s scripts have really shown the Emperor to be a true despot for readers to openly despise as opposed to the pulp villain readers secretly enjoyed.

Fleeing Ming’s airfleet, Flash, Dale and the Freemen take refuge with Chong the smuggler who leads them to the underground system built beneath his house. Alex Raymond’s artwork has grown in sophistication to the extent that many panels appear to be portraits. A recurring theme throughout this episode is of Dale struggling with despair as they attempt to reach Arboria and seek sanctuary from Ming’s fleet. Flash and Dale become separated from the others and have to fight off a menacing turtodon. After killing the prehistoric beast with a stalagmite, Flash detaches its shell and uses it as a makeshift boat with which he and Dale are reunited with Zarkov, Bulok and Chong on the banks of Arboria. 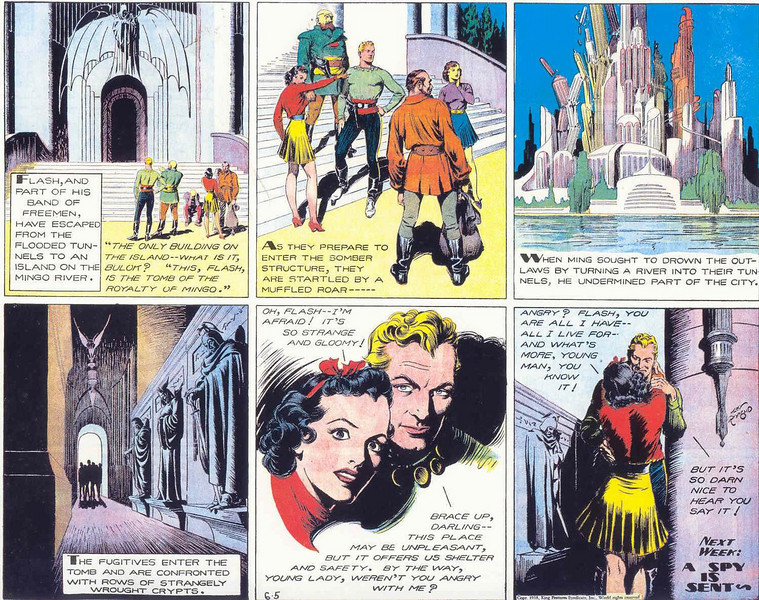 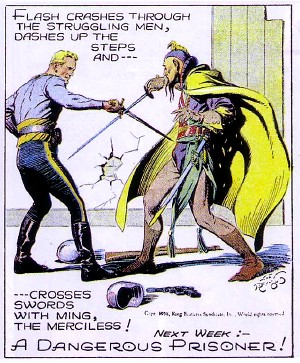 Reunited with Barin and Aura in the rebuilt Arboria, Flash and Dale are introduced to the royal couple’s  infant son, Alan. Barin and Arboria are portrayed with a splendor and nobility that were lacking before. Flash and Dale also meet Barin’s cousin, Ronal. Of course, the reunion is short-lived as Ming pays a visit to meet his grandson. Ming informs Aura that he plans to take his grandson away from his parents so that Ming can raise him to be his royal heir. Barin refuses to allow his son to be taken from him and a furious Ming departs.

Ming leaves behind spies who capture Barin’s right hand man, Captain Solas allowing Ming’s right hand man, Major Lingan to disguise himself as the captain to infiltrate Arboria and kidnap young Prince Alan. Lingan quickly learns that Flash is alive and is being harbored by Barin. After a great deal of effort, he succeeds in abducting the infant prince and making good his escape. The real Captain Solas returns and confronts the traitor. Flash shoots Lingan in the back just before he can murder Prince Alan. Learning from Solas that Ming is aware that Flash is being sheltered in Arboria, Flash resolves they must leave immediately to prevent Ming from decimating Arboria with another airstrike. Ronal, who is secretly in love with Dale, opts to join Flash, Dale and Zarkov as they set off in a rocketship bound for the Ice Kingdom of Mongo in the next installment.

Just love these Flash Gordon blogs. Makes me feel like I’m a kid again, watching episodes every Sunday morning on TV. Now I own them on DVD — just as they were originally shown at theaters — not in the edited “theatrical movies” that came later. Thanks for another great one, Wlliam!

Thanks, Joe. I appreciate the support. We have a few more weeks of FLASH GORDON to go.