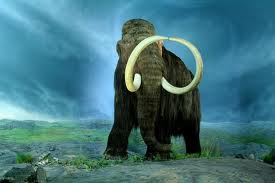 CNN is reporting that a team of Japanese, Russian and American scientists are attempting to clone a mammoth, an extinct beast from the ice age. Apparently, they’ve achieved recent breakthroughs by combining the genetic code of an elephant with the DNA of a shag carpet. The researchers hope to produce their little cloned bundle of joy within six years, which is just about as long as it took my wife Alice and I to produce a baby (if you count the three years it took to convince her to go out with me).

Mammoths are big.  Big big big. Hence, the name “mammoth.” The word comes from the Russian mamont, meaning “humongous,” or something like that. Probably. Anyway, Wikipedia reports the largest known species reached heights of 16 feet at the shoulder, and may have exceeded 12 tons. That’s four times as much as my Uncle Phil’s Hummer. Wherever they’re doing the cloning, I hope it has vaulted ceilings.  And maybe a fenced yard, so the little tyke can go outside to do his business.

Incredibly, Wikipedia also reports an 11-foot long mammoth tusk was discovered north of Lincoln, Illinois in 2005, about three hours from where I live. Can you get enough DNA to clone something from a tusk? [Hey Alice — road trip!!]

Contrary to everything I learned in eighth grade, mammoths are not dinosaurs. They’re giant gorilla elephants. They’re also mammals, like that other famous extinct not-a-dinosaur, the saber-tooth tiger.  Scientists have chosen to clone the mammoth first, rather than the saber-tooth tiger or the Tyrannosaurus Rex, because they’re unimaginative losers.

As every well-read science fiction fan knows, cloning mammoths is just the first step on the slippery slope towards cloning people, cloning cats, Clone Wars, and the inevitable zombie apocalypse. I hope that in the interim, we get around to cloning Neanderthals. Because let’s face it — that’s what cloning is for.

My son’s favorite place to go is the La Brea Tar Pits. The stuff they’ve found in there is crazy, and I’ve learned a lot.

I’ve touched one of those Mammoth tusks, and seen the skeletons of the Saber Tooth Cats [oddly they aren’t tigers, but someone started calling them that and it stuck], the Dire Wolves, and the American Lion which they have a ‘real-size’ statue of at the San Diego Zoo which is INSANE, it’s twice the size of a standard African lion and when you look at it close to and elephant, you can’t help but know it could take one down all by itself.

Oh, and the SDZ has elephants, and a huge cage with revolving doors for them which is right out of King Kong and I couldn’t help thinking about it as you wrote above, seeing how they would keep a mammoth in.

I’m jealous of your trips to the La Brea Tar Pits. Next time you’re there, slip some of that sweet tar into a test tube and courier it here to the Black Gate rooftop labs. If Howard and I manage to synthesize an extinct lifeform outta it, we’ll share the credit with you.

Man, I want a Dire Wolf like you wouldn’t believe. Really, any pet with the prefix “Dire.” I’d take a Dire Hamster. Anything.

I bet you can be buried at the La Brea Tar Pits, if you do it at night when no one is looking. 20 million years from now they’ll dig me up, and a floating brain will ask the brain next to him, “What the hell is THIS thing?”

Documentaries on mammoth clones have been airing for ten years, and now we’re finally going to have one! Bringing an extinct animal back is incredible. I can imagine turning on the TV and see a broadcast of a newborn wooly mammoth. But cloning Neanderthals and dinosaurs doesn’t seem practical. Would scientists really need a living caveman or dino to do studies on evolution?

Well, according to DNA reviews of Neanderthals, we currently share 5% of their DNA, which is to say, Neanderthals might not need cloned because they are already here, Homo Sapian just mated with them and drew their DNA into ours as a single species.

John: Will do! Have the science team ready for the Fedex coming to you soon. Oh, and my son loves Dire Wolves as well, its his favorite thing at the museum.

OH, and in all the thousands of things they’ve found at the tar pits, only a sinlge human has been discovered. A young woman… that had to be a very bad day 12,000 years ago.

Aw John, this will never work!
Haven’t these imagination deprived scientists ever seen any movies?
Sure, they’ll clone some mammoth, BUT…

A) They’ll accidently also clone its parasites, which will mutate in the modern world (probably through contact with Cheez-Its or some other Nabisco product), then eat humanity alive and cause the End of the World.

B) They’ll accidently botch the cloning process and create super-intelligent mammoth-oids with a craving for human flesh which will then eat humanity alive and cause the End of the World.

C) They’ll accidently create super-randy mammoths who will reproduce with such speed that they’ll devour all the world’s foodstuffs, take up all the space on every landmass, trample humanity alive and cause the End of the World.

D) They’ll accidently breach the portal of things Man Was Not Meant to Know, tap into the vast unknowable Mammoth Super-Consciousness which will then plunge the earth into a Super Ice Age, freezing humanity alive and causing the End of the World.

E) Something else very terrible and totally apocalyptic.

I bet a baby mammoth would be pretty cute though. Can I pet it?

This is great! Now I know what to get you for your birthday. Maybe Patty and Katie and Amal will go in on it with me.

I wonder if we can buy “Dire Hamsters” on Amazon.com?

P.S. Obviously they’re breeding the mammoths first to give the saber tooth cats something to eat!

Now y’all know what happens when there aren’t 2 posters per day here at the BG weblair. 🙂

John, have you read Ted Kosmatka’s “N-words”? (Also listen-to-able on Escape Pod.) That cloning business only leads to tears.

> But cloning Neanderthals and dinosaurs doesn’t seem practical.
> Would scientists really need a living caveman or dino to do studies on evolution?

Dude, I don’t think this has anything to do with studies of evolution. It has to do with CLONING A DINOSAUR. What’s practical about that? It produces a dinosaur! Pay attention.

> according to DNA reviews of Neanderthals, we currently share 5% of their DNA

Mr Hocking, you are my favorite post-apocalyptic prophet of all time. I especially like the mutant parasites. What if, instead of extracting DNA from a mammoth, they accidently extrated DNA from a perhistoric killer parasite INSIDE the mammoth??

By the time it grows to 1,500 pounds, it’ll be too late. The scientists will be edging backwards towards the door, the power to the restraints will fail, the parasite will get loose, and…

Oh man, this is going to be SO AWESOME. Why can’t they clone this thing already?

>Obviously they’re breeding the mammoths first to give the saber tooth cats something to eat!

C.S.E, you have the mind of a true evil scientist. Why didn’t I think of that? Because I’m not a genius like you, that’s why.

When I make my first major motion picture, I want you to be the lab director who pulls the switch and shouts, “Fools!! I’ll show them all!”

>John, have you read Ted Kosmatka’s “N-words”? … That cloning business only leads to tears.

Gardner put it in The Year’s Best Science Fiction.

John ONeill
When I make my first major motion picture, I want you to be the lab director who pulls the switch and shouts, “Fools!! I’ll show them all!”

yes, a very good role for a blonde beauty like CSE Cooney, and I at first thoought she was a man, in other film Amal could be a sexy and exotic villainess and CSE Cooney the heroine… ummm…