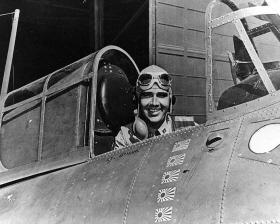 I’ve been pondering the need for heroes in fiction again this week, and I thought it a good time to revisit a post I’d made on the Black Gate Livejournal page a few years ago. I imagine a lot of you haven’t read it; if you have, I apologize for the repeat.

During the school year my little girl brings home reading practice sheets every week. Each day we’re to time her reading the fluency sheet for a minute, three times, the idea being that it will improve her reading. She does get better at reading each time through, naturally, but she also gets pretty bored – I suppose I would, too, if I had to read the same thing over and over three times a day. But she’s also bored because the stories as a whole haven’t been very interesting. Except for one.

She brought home the story of Butch O’Hare. I’d never given much thought to whom O’Hare airport was named after. I suppose I assumed it was named after a politician. None of these fluency stories can be read completely in a minute—she was only about a third of the way through when the minute timer dinged. My son, her older brother, was so interested that he looked up from his own homework and said “actually, that’s pretty interesting.” I agreed, and asked her to keep reading, and she was intrigued enough herself that she kept going without complaint.

Stories about heroes fascinate my family, and, I believe, humanity as a whole. I think that we’ve become so cynical that we sneer a little when we hear stories of heroics and imagine that it can’t really be true, or we wonder if the hero secretly beats his wife. We are programmed to think that we REALLY need to read stories of ordinary people or cowardly people or despicable people and that stories of heroes are for children. We’re savvy enough now not to believe everything we hear or read, because, God knows, we’ve been fooled plenty of times.

But we still need heroes. And Butch O’Hare was one.

In WWII, O’Hare was a fighter pilot on the aircraft carrier Lexington. No less than three separate patrols had been launched from the Lexington to investigate radar contacts, so that when a fourth popped up there was only O’Hare and his wingman left to investigate. What they discovered was a flight of nine – count ‘em, nine – Japanese fighter bombers (called Betties) en route to the Lexington.

My knowledge of WWII is pretty scant, as it’s pre-industrial history that’s always fascinated me, so I had to look up entries on these fighter bombers. A few of them would have had enough bombs to sink an aircraft carrier, and here came nine, each manned by a tailgunner as well as boasting regular armaments. O’Hare had only a little over 140 seconds worth of ammunition in his machine guns. To make things worse, once he and his wingman were airborne and getting ready to engage, the wingman discovered that his guns were jammed. It was O’Hare alone against the bombers.

He flew up one side of the V formation and then dived under to swoop beneath the other. His shooting was so exact that he completely blew off the fuselage of one of the Betties. One of the Lexington’s other patrols came screaming back when the fight was almost over, and the officer reported seeing three bombers going down in flames at the same time, so rapid and efficient was O’Hare.

Only three of the bombers got past O’Hare, and amazingly none of them hit the Lexington. The ship’s commanding officer said that O’Hare might well have saved the entire ship. Even more amazingly, O’Hare’s plane only got hit once. And don’t think that these were slow, plodding craft he was fighting. These were dangerous planes. He was just skilled, capable, and lucky. Not to mention heroic.

It brought to mind a preface I’ve always liked. Edison Marshall wrote one of my favorite historical novels, Earth Giant, the narrator of whom is none other than Heracles. He drafted these words at the end of a short introductory essay:

…I feel mystically about heroes, whether Heracles, Arthur, Roland, Ragnar Lothbrok the great Viking, Siegfried, Captain John Smith, John Paul Jones, and some living in the last century or even alive today. It seems to me that the Gods love them, that Olympian lightning plays about their heads, that Chance suspends her dull laws when one of the breed comes nigh, that Fate will meet them more than halfway, that event in ratio to their own greatness is their daily fare as long as their heroism lives.

We need our heroes. We need to know that when the chips are down people can stand up – stories like that of Butch O’Hare’s, or the story of Martin Luther King Jr., or the stories of Brave Horatius, Robin Hood, and heroes appearing within the pages of Black Gate – we need to hear and read tales both true and fictional to inspire us to stand up when the chips are down, when someone needs to do something to right a wrong, when someone needs to stand up for the little guy or to protect home, hearth, and comrades.

O’Hare’s father was one of Al Capone’s accountants. He agreed to aid the Feds and became a key undercover man in Capone’s organization. His testimony helped put Capone away and Capone’s thugs killed him the same year O’Hare did his flight training.

He holds the Congressional Medal of Honor, the Navy Cross. He was killed (most likely) while tangling with some Betties in 1943.

He was much more a St. Louis man than a Chicago guy, oddly. After his death, they gave him a full requiem mass at the St. Louis Cathedral.

Lots of historical “what ifs” echo around O’Hare. Suppose the Lexington had been badly damaged or even sunk? How would that have effected the battle of the Coral Sea in May 1942, where, paired with the Yorktown, they more or less fought the Japanese to a draw in the first naval engagement where surface ships never sighted each other (and Lexinton finally went to her watery grave)? Had the Yorktown been badly hurt or sunk in that battle, she wouldn’t have been available for the action at Midway (where she was one of only three American carriers), where her dive bombers joined with those of the Enterprise in the destruction of Japan’s veteran carriers.

All because Butch O’Hare was a really good shot…

Amen, brutha! We need heroes–we always have and we always will. From the warrior who defends our homes to the teacher who broadens our minds…there are many different types of heroes. The ones that get us most excited are the ones we tell stories about–from Beowulf and Gilgamesh all the way up to Indiana Jones and Batman. They come in all shapes and sizes, all sexes and cultures, and the best thing is that ANYONE can be a hero.

A hero is the one who is just as afraid as everyone else, but doesn’t let that stop him (or her) from doing the right thing.