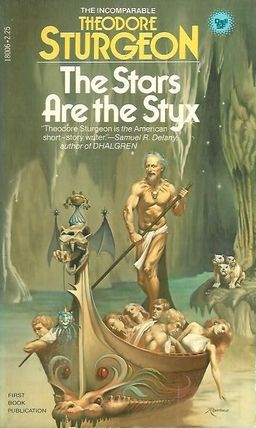 We’re living in a truly splendid era for fantasy fans. Fantasy films and TV shows routinely top box office charts and Nielsen ratings, fantasy novels crowd bestseller lists, and Gandalf, Harry Potter, and Tyrion Lannister are all household names. Believe it or not, there was a time when girls did not find you cool for talking about Wolverine or Captain America, or for being able to rattle off the names all 13 dwarves who accompanied Bilbo into the Misty Mountains. Hard to comprehend, I know.

Even those of us who cherish the history of the genre have a lot to celebrate. Many of the great fantasy books of the 20th Century are still in print, or at least available inexpensively online. Let’s face it — if you’re a fantasy fan, the world is your oyster.

Unless you’re a fan of short story collections, of course. In which case, you’re out of luck.

For most 20th Century fantasy writers, this has been a regrettable literary development, but not catastrophic. Most didn’t have short story collections anyway. But for some — like the great Theodore Sturgeon, who produced much of his best work at short length — it means that the 21st Century is rapidly forgetting them.

And that’s a tragedy. Yes, Sturgeon did leave behind a handful of novels, some of which — like More Than Human, The Dreaming Jewels, and Venus Plus X — are still in print today (in attractive trade paperback editions from Vintage Books actually; check ’em out.) But for decades before his death in 1985, he was justly renowned as one of the finest short story writers the field had ever seen.

North Atlantic Books published a beautiful 13-volume set of The Complete Short Stories of Theodore Sturgeon, edited by Paul Williams and with intros by Harlan Ellison, Samuel R. Delany, Kurt Vonnegut, Gene Wolfe, Connie Willis, Jonathan Lethem, and many others. But these were expensive, poorly distributed, and aimed squarely at the collector’s market. The Complete Theodore Sturgeon was a godsend to his existing fans, but it didn’t do much to win over new ones.

Which means it’s essentially down to us to keep the memory of Theodore Sturgeon alive. (By us, I mostly mean you. I’m just the idea guy.)

Fortunately, we’re ably assisted in this noble endeavor by small bookshops and online booksellers, most of which have one or two (or maybe 15, who knows?) Theodore Sturgeon volumes hidden away somewhere in their inventory. So your assignment is pretty simple: train yourself to spot, acquire, and promptly read and share these treasures whenever and wherever you find them. Sorta like those monks in A Canticle for Leibowitz, except you’re encouraged to get a better haircut.

As always, we’re here to help. And today we’ll start your training with Sturgeon’s 1979 collection The Stars Are the Styx. Partly because it’s a solid collection, but mostly because I love Rowena’s cover, and it’s dead easy to spot even in the back of a poorly-lit bookstore.

Here’s the back cover blurb:

Let Sturgeon the Enchanter move, chill, and entertain you with:

TANDY’S STORY: Lots of little girls build houses for their dolls — but a working factory…?

THE EDUCATION OF DRUSILLA STRANGE: Condemned to exile and torture, she rejected her only hope of release.

RULE OF THREE: “Two’s Company” is a tradition that could destroy mankind!

Plus six other top-notch Sturgeon stories by an old master writing at his unmatchable peak. 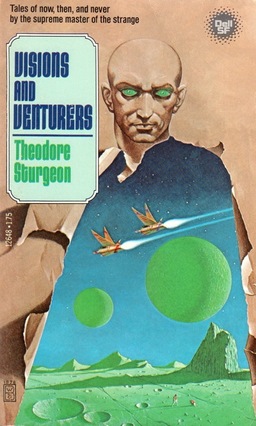 The Stars Are the Styx contains two complete novellas — “The Other Man” and “Granny Won’t Knit” — and a total of 10 stories, virtually all of them originally published in Galaxy. Here’s the complete Table of Contents:

Dell published five additional Sturgeon volumes at around the same time and they’re all beautiful: the novels Venus Plus X (1979) and The Dreaming Jewels (1980), and the collections Visions and Venturers (1978), The Golden Helix (1979), and a 1980 reprint of Beyond (originally published in 1960).

Bluejay Books did permanent hardcover editions shortly after the Dell paperbacks appeared, all with Rowena covers — and even published an additional one, Alien Cargo (see them all here).

The Stars Are the Styx was published by Dell in October 1979. It is 384 pages in paperback, priced at $2.25. The cover is by Rowena Morrill. I acquired my copy in the collection of Mary Dechene. It has been out of print for over 30 years, and there is no digital edition.

So many great SF/fantasy writers best work was short work. Fredric Brown, Murray Leinster, William Tenn, Damon Knight, C.M. Kornbluth, Cordwainer Smith, Harlan Ellison, Avram Davidson, James Tiptree Jr, Stephen King (I’ve always thought he was at his strongest at less than than novel length.) The list goes on and on. All dropping – or dropped – from the radar unless they’re still around to blow the horn. There’s so much praise lavished on large-scale, Tolkienesque “world-building” in fantastic fiction that the achievement of conveying a radically different reality in the shorter compass of a short story too often gets short shrift (ha) from critics and readers.

Absolutely true. Although honestly, no one is too worried about Murray Leinster, Harlan Ellison or Stephen King being forgotten any time soon. Maybe their best work was at short length, but they’re all thought of today for their novels and movies/TV shows.

Now William Tenn, Avram Davidson, and James Tiptree Jr… that’s a different story. I didn’t even think of adding Tiptree, since even a casual search on Amazon reveals a handful of Tiptree books still in print. But most of them are books ABOUT her or named after her (like the three Tiptree Award Anthologies). I hadn’t realized that virtually all of her short fiction is long out of print, with the exception of the 2014 Tachyon reprint of HER SMOKE ROSE UP FOREVER.

I do wonder about Ellison’s work when Harlan is no longer around. It certainly should last and last, like everyone I mentioned, but when his incandescent personality isn’t front and center anymore…actually, maybe that will make the work itself stand out even more! And that Tiptree volume, Her Smoke Rose Up Forever, is the greatest single volume of short SF I’ve ever read. It should be in every fantastic fiction lover’s library.

Your push to raise awareness of nearly forgotten old authors and unhyped new authors is what makes this blog worth coming back to.

I much prefer short stories and never understood how people find the time to read so many phonebook novels.

I feel like the short story is on its way back. but maybe thats just because i’m more plugged into whats being written nowadays.

The medium will probably never be as popular as it was but i hope we see even more of a surge.

> I do wonder about Ellison’s work when Harlan is no longer around. It certainly should last and last,
> like everyone I mentioned, but when his incandescent personality isn’t front and center anymore…

Good point. Personally, what I’ve found is that real longevity in this field is usually in the hands of a core group of fans who continuously champion and promote the work of specific individuals — look at what tiny Arkham House did for H.P. Lovecraft long after his death, for example, or the respect Robert E. Howard enjoys today, thanks to the tireless work of the Robert E. Howard Foundation, REHupa, and others. That kind of dedication requires a cadre of determined fans.

Ellison’s reputation, as you noted, depends in large part on his personality. He’s made a lot of friends, but it often seems he’s done just as much to antagonize fans and keep them at a distance. His final convention appearance at MadCon 2010 was disastrously underattended (so much so that the convention, which had heavily invested in his appearance, did not survive).

I’m rather gloomy about Ellison’s prospects in print after his death, truth be told.

> And that Tiptree volume, Her Smoke Rose Up Forever, is the greatest single volume of short SF I’ve ever read.
> It should be in every fantastic fiction lover’s library.

Thanks for the rec! Over the years I’ve read her stories in various anthologies and her own collections (including Ten Thousand Light-Years From Home, Star Songs of an Old Primate, and Warm Worlds and Otherwise), but I have not experienced the impact of Her Smoke Rose Up Forever. Sounds like I need to curl up with it!

> Your push to raise awareness of nearly forgotten old authors and unhyped new authors is what makes this blog worth coming back to.

I appreciate that, Tyr. I wish there were more of us out there. As it is, we need to stick together.

> I feel like the short story is on its way back. but maybe thats just because i’m more plugged into whats being written nowadays.

I hope you’re right. Certainly the online outlets like Beneath Ceaseless Skies, Lightspeed, Tor.com, Subterranean and Clarkesworld are getting the lion’s share of the attention these days — Tor and Subterranean had more Hugo Award nominations than all the print outlets COMBINED this year:

Still, it’s very, very tough to make money selling short fiction these days (I know. I tried), so I’m far from bullish on the market. We’ll see what the future holds.

>I’m rather gloomy about Ellison’s prospects in print after his death, truth be told.<

Harlan himself isn't too sure, John, not just about his own work abut about anyone's. Check out this Ellison rant about literary longetivity.

ONeill: “Your push to raise awareness of nearly forgotten old authors and unhyped new authors is what makes this blog worth coming back to.”

My favorite work by Sturgeon is his (unfortunately out of print) novel, Godbody. Some people say it reeks of incompleteness but I strongly disagree and think everybody curious should track it down and read it.

I’ve heard very little about Godbody — the book vanished shortly after it appeared, and was not a success. But what I HAVE heard has been very good. I have a SFBC edition from long ago, and will have to check it out. Thanks for the rec!

To put the problem of literary longevity in perspective, consider this bit by Teresa Nielsen Hayden, in which she explains the difficulty of keeping older works in print, and observes that the normal state for all books is to be out of print.

(On the other hand, I remembered enough about an eight-year-old blog post to track it down, which is probably more longevity than Nielsen Hayden ever expected for that piece.)

You’re right — that was a terrific post. Thanks for the link!

It reminds me that I should stop complaining that so many of the books I love are out of print, and carry on celebrating the fact that out of print books are cheap, plentiful, and easy to acquire. Things could be much worse.

[…] few weeks ago, I wrote about Theodore Sturgeon’s collection The Stars Are the Styx and complained that virtually all of Sturgeon’s brilliant short story collections had now […]