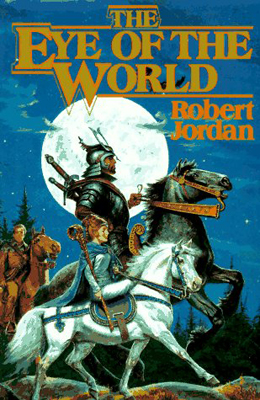 The nominees for the 2014 Hugo Awards have been announced by LonCon 3, the 72nd World Science Fiction Convention, and let’s not mince words: it’s a wacky ballot.

What’s so wacky about it? Well, to start with, the novel category includes The Wheel of Time. That’s right, the complete series. Which means that 2013 novels likes Parasite by Mira Grant and Ancillary Justice by Ann Leckie will be up against one of the great phenomena in publishing history, a series spanning more than 20 years with combined sales of 44 million (to put that in perspective, George R.R. Martin’s A Song of Ice and Fire, which includes A Game of Thrones, has sold a paltry 24 million copies). Not exactly sure how that happened, but I wouldn’t want to be one of the other novel nominees this year.

There are additional surprises. Analog magazine, effectively shut out of Hugo nominations for many years, has surged back into the limelight with two nominations (both for Brad Torgersen), and the traditionally strong Asimov’s SF and F&SF both come away empty-handed. Some folks are laying the credit (or blame) for that on an organized campaign of bloc voting by nominee Larry Correia, which successfully placed as many as seven nominees on the ballot… but really, every year someone gets accused of bloc voting and it’s tough to blame someone for having enthusiastic fans.

It’s a triumph for Tor.com, with no less than four short fiction nods — more than all the print magazines combined. And the highly regarded Clarkesworld, which led the pack for short fiction nominations last year, didn’t make the ballot at all.

There are lots of people to congratulate, including several Black Gate contributors on the list, but I’d like to give a special shout-out to Scott Taylor, who acquired Dan Wells’s The Butcher of Khardov while he was an editor at Privateer Press. While I’d have to do some research to confirm it, I believe this is the first piece of licensed fiction to be nominated for a Hugo Award for Best Novella. Congrats on helping to make history, Scott!

The nominees for the 2014 Hugo Awards are:

The Coode Street Podcast
Doctor Who: Verity!
Galactic Suburbia Podcast
SF Signal Podcast
The Skiffy and Fanty Show
Tea and Jeopardy
The Writer and the Critic

Tor.com and Analog aren’t the only winners in the short fiction categories — Subterranean brings home two noms this year.

This year’s Hugo Award ballot represents a historic shift in demographics. This has been coming on for a couple of years now, but this year a tipping point has been passed…

As usual, many of the short fiction nominees are already online and you can enjoy the best SF and fantasy of the year without lifting a finger (if you don’t count your mouse finger). The tireless John DeNardo at SF Signal has provided a linked list of nominees for you. Thanks John!

The Hugos are named after Hugo Gernsback, the founding editor of Amazing Stories, and this year will be awarded  at the 72nd World Science Fiction Convention, LonCon 3, in London, England, on August 18, 2014.

Read up on last year’s winners here, and the 2013 nominees here.

Thanks John! It is a great story, and Dan was fantastic to work with on it.

[…] interested in that crowd reaction, John O’Neill covered the tip of the iceberg in his post last […]

[…] been a lively and far-ranging debate that’s arisen out of the 2014 Hugo nominations, recent turmoil inside SFWA, and even the lingering controversy over WisCon withdrawing Elizabeth […]

[…] stories by some of the best writers at work in the field today, including multiple Hugo and Nebula award nominees — such as “Selkie Stories are for Losers” by Sofia Samatar […]

[…] in April he was nominated for a Hugo Award for Best Professional Editor, Short Form (his seventh nomination), for his work as […]

[…] in April, he was nominated for a Hugo Award for Best Professional Editor, Short Form (his seventh nomination), for his work as […]