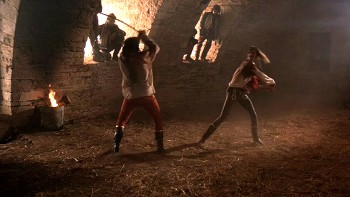 One of the oddest, most esoteric regrets in my life is that I long ago gave away my collection of the now defunct American Film magazine. Most of these, purchased primarily from sidewalk vendors in Manhattan, I do not care to recover; but I would give a great deal to have again the October issue from 1986. It contains a dialogue with film producer David Puttnam, and one small paragraph in that interview taught me more about collaboration than any other single event I know.

More on that in a moment. In the meantime, let me introduce one of Hollywood’s really fine on-screen adventures, The Duellists.

Now, I admit up front that as with The Horseman On the Roof, a title I explored a few weeks back, The Duellists contains no overt fantasy element; but what it lacks in sorcery, it more than makes up for in swords. Right out of the gate, Lieutenant D’Hubert (Keith Carradine, one of my very favorite actors) is ordered by a busy general to round up fellow cavalry man Feraud (Harvey Keitel) and escort him to the brig; it seems that Feraud has been dueling, illegally, with the mayor’s nephew. Feraud takes offense first to D’Hubert’s assignment and then to D’Hubert himself; he challenges him on the spot to a duel, an event D’Hubert, a reasonable man, ultimately cannot prevent.

Thus the wheel of this most simple of plots grinds into implacable motion: D’Hubert cannot ever contrive to avoid Feraud, and neither, in repeated duels, each instigated by Feraud, can ever quite kill off the other. Over the course of the Napoleonic wars, these two clash again and again in a battle both particular and symbolic. D’Hubert’s enlightened rationalism must stave off Feraud’s chivalric single-mindedness, and both, to D’Hubert’s dismay, must contend with the expectations of the times: that their differences constitute a “point of honor” (indeed, such was the title of the story on its U.S. publication), and that to settle this point, one of them must die.

But wait, you cry! What about David Puttnam and all those moldering magazines? 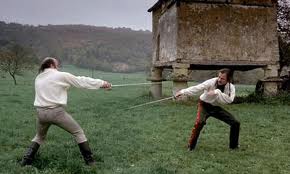 Well. Let’s first sing of arms and the man. Make no mistake, Puttnam was a star in his own right.  His credits include The Killing Fields, Midnight Express, Melody (a personal weakness of mine), and Local Hero, among many more.

In that long-ago copy of American Film, Puttnam was being asked about the differences, in his view, between Chariots of Fire, his masterstroke, and the near miss –– the coulda-been, shoulda-been ­­–– of The Mission. Since I cannot find the American Film interview on the internet, I cannot quote, but the gist of what Puttnam said was this: “On Chariots, everyone was working toward exactly the same thing. On The Mission, although we didn’t realize it at the time, we were all about ten degrees off of center. Some of us going here, some of us going there. Nobody was far off the mark, but in filmmaking, ten degrees is all it takes to go wrong.”

David Puttnam, as you have no doubt guessed, was also the producer of The Duellists, a piece that began, quietly enough, as a short story. This might sound like a poor pedigree; but in fact, short-form fiction, extolled here on Black Gate despite being so often ignored by the reading public, has inspired some of film’s finest moments. Consider It’s a Wonderful Life, The Killers, and Breakfast at Tiffany’s, all of which were based on short stories (“The Greatest Gift,” “The Killers,” and “Breakfast at Tiffany’s”). Add to that tip-of-the-iceberg total Joseph Conrad’s “The Duel: A Military Story” (1908), which, in the fullness of time (love that phrase, always wanted to employ it) became Ridley Scott’s feature debut, The Duellists.

The sages do tell us that truth is stranger than fiction, and so yes, you’ve guessed it: Conrad based all this on true, historically documented events. Scott apparently saw the work as “a story of man’s violence within himself.” (See imdb.com) 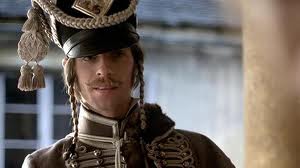 The Duellists won Scott an award at Cannes for best debut (1977), and hindsight suggests the honor was well deserved; the film ages exceptionally well. In fact, I enjoyed this re-viewing far more than my initial exposure to the work. (I suspect that first screening was via a poorly tracking VHS tape in some squalid Upper West Side apartment –– likely the same building where the drug-addled third-floor tenants stole my laundry, every last scrap. If only I’d had Feraud on hand as my personal attack dog, I’d have gotten it all back.)

Every actor delivers top-notch performances, with Carradine leading the way. His proposal of marriage, in which he not only has to kneel in the mud but has his hair nibbled throughout by a restive horse, is by itself worth the price of admission, and the surreal confrontation on the icebound Russian front is a marvel of taut, nearly wordless storytelling. Carradine’s D’Hubert is both decent and frustrated; why must Feraud continue on such a splenetic course? D’Hubert’s physician (Tom Conti) wonders much the same, but is in no way optimistic that Feraud, or others like him, will change. As he puts it, “The enemies of reason have a certain blind look.  He has that look, don’t you think?”

Scott’s direction is assured, grounded, and stylized only during a brief horseback charge employing flashbacks (of rage) and, for a moment, during the duellists’ final confrontation. One small disappointment: Scott allowed cinematographer Frank Tidy the liberal use of graduated filters to darken the sky. (Scorsese fell down the same unfortunate well in his remake of Cape Fear.) The effect might be described as artistic, but in a film that strives mightily (and otherwise succeeds) to submerge us in the realism of its day, this works entirely against it.

The only other serious complaint I can levy arises from the absurd mish-mash of accents. Carradine and Keitel make no attempt to scrape the American off their tongues, and the many Brits in the film, including James Fox and the incredible Albert Finney, sound as staunchly English as they ever have. Because the film overall is so strong, none of these verbal hypocrisies bothered me much, but I must admit that much as I adore Carradine’s work, the entire enterprise would have been better if cast with French actors, speaking francaise.

As with so many period pieces, the male characters do nearly all the dramatic heavy lifting.  While some fine actors embody the female roles, they do little to advance the story. D’Hubert’s sister functions as a sort of moral compass, and as such claims one of the finest pieces of dialogue, telling her brother (and us) that “Nothing sensible ever goes out of fashion.” Nominally, she’s referring to arranged marriages, but the subtext is clear. Dueling, thankfully, has fallen well out of fashion, and is thus revealed to have been entirely insensible. 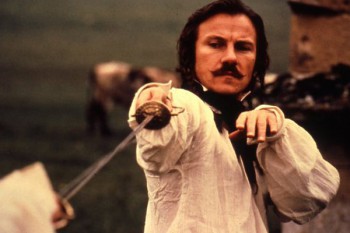 Back, then, once more, to Puttnam.  In my work as a playwright, his observations have proven to be invaluable. They provide a bright North Star by which I may judge how well I and any given producing venue may be getting along. And the lesson serves in prose, as well, though not until a given story has been accepted. Only the best editors will pick up on exactly the story you’re trying to tell, and even then, they can only manage this trick if you, the writer, do the job properly and serve up the story, piping hot and thoroughly revised, on the appropriate error-free plate. A certain amount of editorial give-and-take can be very healthy –– for the writer, for the story, and for the venue –– but it can also signal a deviance of perspective.  If that proves to be the case, it might be wise, long term, to pursue some other relationship. Then again, it might not. Each collaborative situation is different, and each must be carefully, dispassionately considered.

Puttnam’s words remind me, too, of Ray Bradbury, who used to tell a story about why he hoped Sam Peckinpah would direct Farenheit 451. Bradbury wanted to know what Peckinpah would do if he were handed the directorial reins. Peckinpah’s response? “Tear the pages out of the book and stuff them in the camera!” Oh, if only he’d been given the chance.

Time, then, to close. But speaking of short stories converted to film, let’s keep our fingers crossed for 2014. I hear that Phillip K. Dick’s “The King of the Elves” is on its way. A slight piece, perhaps, to burgeon into a full-length film, but who knows? Even the smallest of acorns may one day grow mighty oaks.

Mark’s most recent publication with Black Gate was the short story “The Trade,” which Tangent Online called “Marvelous… Can’t wait for the next part.”

I’ve only seen the back half of this movie. I must rectify that.

Sweet write-up Mark, thanks for the recommendation and analysis.

I’ll be back in two weeks. Not sure what’s next, but I have at least one ace up my prodigious sleeves…